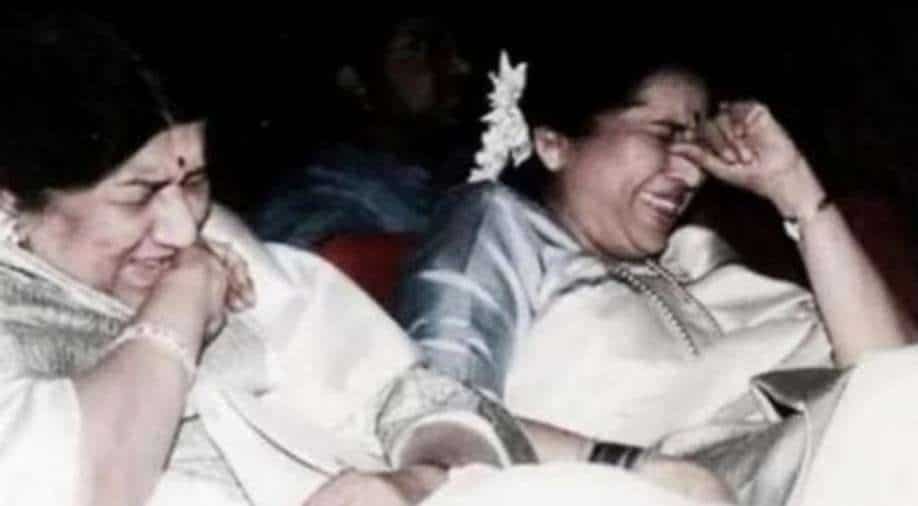 The stories of their fierce rivalry notwithstanding,  the singing legends Lata Mangeshkar and her sister Asha Bhosle have always shared close ties.

Everyone knows Lata Mangeshkar and her super-illustrious sister Asha Bhosle had come together for monumental numbers like 'Mann kyon behka'(Utsav) and 'Jab jab tumhe bulaya'(Jahan Aara). But it's not well-known that the two legendary sisters had sung 50-55 songs together.

The stories of their fierce rivalry notwithstanding,  the singing legends Lata Mangeshkar and her sister Asha Bhosle have always shared close ties.

"We used to live in two adjacent apartments connected by a door and we would be in and out of each other’s homes all day. Now Asha has moved out of that apartment. But we are in touch regularly. We are sisters and have always been very close. The rivalry is all in the minds of others,” said Lataji in an old interview with the writer.

In fact there are two major instances of Lataji happily passing on her song to her 'Choti Bahen'.

Producer Pahlaj Nihalani spoke of one such incident.  “Bappi Lahiri and I wanted only Lataji to sing all the songs of my  1991 film 'First Love Letter'. Lataji came and sang all the beautiful melodies in no time at all. But then when she was to record the last song 'Kambal na hatao', she said it suited her sister better. So we called Ashaji for that song.”

Another incident where  Lataji voluntarily opted out of a song was narrated to me by the late Yash Chopra. “As usual Lataji was my female voice when my son Adi(Aditya Chopra) made his directorial debut in 'Dilwale  Dulhaniya Le Jayenge'. But for one song 'Zara jhoom loon main' Lataji told me Ashaji would be better.So we got Ashaji to do that one song.”

Lataji was full of praise for her sister. “What my sister Asha has achieved is amazing. I’m very proud of her. It’s said that no tree can grow under a large tree. I’m lucky that I  never had to go out and seek work for my kith and kin. Whatever my brother Hridayanath and sister Usha have achieved in the music world, they’ve done on their own. But I feel my presence has cast a shadow over their careers.  Asha had to move away from my shadows to prove herself. And she did it so wonderfully! She set out to do what she had to on her own. And I feel very happy.”

I told Lataji that she seems to have left a certain kind of song, the fast-paced Westernized numbers for her sister. Lataji protested and said, “ My sister has reached a stage in her career where she can attempt anything.  I want her to touch the sky.... Please don’t make me sound like a sacrificing martyr by saying I let Asha sing the westernized songs. Aisa bilkul nahin. I just couldn’t connect with cabaret songs. What Asha can sing I can tell you without any pretence of modesty I can never sing. I can never give the expression and style she did in Aaja aaja main hoon pyar tera and Piya tu ab to aaja. It’s just not me. I  was meant for softer, romantic songs. As for our much-discussed personal relationship, let me make it very clear that We share a very good relationship. There is no stress.”

Lataji admitted the two Mangeshkar sisters had their normal share of differences. “We meet very often. Though she doesn’t stay next door anymore, she has her morning tea with me whenever she’s here. If one is cooking in the same kitchen there’s bound to be some clamour. It’s just routine family squabbles. Whenever Asha has a show she seeks my blessings first. I’ve heard her lyric book has my picture in it. My relationship with none of my siblings is troubled. I fulfil the function of the eldest with all my siblings.I am fortunate to have such siblings. People say all kinds of things about our relationship. There’s no fight between us But yes, at a tender age Asha left home and got married. And she made a big name for herself. I’m very proud of her. I rate Asha very highly as an artist and a singer. She became famous for nothing. She can sing every kind of song. Thank God she didn’t adopt my style of singing. If she had we’d have become competition for one another. She went on her own path. Yeh man-na padega ki woh bahut badi gayika hai. We’re sisters and  have always been that. Whenever we meet we meet with affections.

The fights were because of her husband who was against me. Maybe he felt Asha didn’t get work because of Lata. He stopped her from coming to our house and he stopped us, sisters, from meeting.  But then Asha and I  started singing some duets together and would meet with warmth. It is said that composers favoured my voice over Asha's. Not true. What about so many films where only Asha sang all the songs?  In fact, O.P Nayyarji worked only with her. Even some of Burman Dada’s scores had only Asha’s vocals.I wish Asha good health, peace of mind and more success."

It is said that when the two legendary singers sang together they never looked at one another.

Lataji laughed off that rumour when I had brought it up. “Another one of those myths that were created to make people think we are at loggerheads. I think this back-to-back singing myth was created based on one photograph where the two of us are seen standing looking in opposite directions. It’s  funny how permanent impressions are created based on fleeting moments.”

Lataji said she sang innumerable songs with her sister. “Asha and I have sung at least 50-60 songs together. People only know some of them like the duets from Utsav('Mann Kyon behka'), 'Dharam-Veer'('Bandh ho mutthi toh laakh ki') and  Pancham’s song in 'Padosan', 'Main chali main chali'.But we sang multiple songs for composers Chitragupta and Shankar-Jaikishan and many others.”

I told Lataji about their rarest-of-rare duets 'Paake akeli mohe chhed raaha' in a film called  'Jail Yatra'(1981). It wasn’t easy for R D Burman  to balance out his  equation between the two sisters. While one was his  muse, the other was his wife. And the muse constantly  felt sidelined. Bringing them together for this neglected zingy dance number in a little-known Vinod Khanna starrer couldn’t have been easy. And yet when they  burst into the  dance moves we hear nothing but the two singers having a whole lot of fun. The  tune has elements of RD-Lataji’s 'Bangle ke peeche'. It’s a top-nautch duet with the potential of being a chartbuster. Sadly it went unnoticed. Just like the other Lata-Asha duet 'Tu badi kismet wali hai' in 'Sanjog' that RD recorded.

Lataji had no recollection of her  duets  with her sister  for RD in Jail Yatra and Sanjog. “Both Asha and I were recording round-the-clock in the 1960s and 70s. We would  do the recording to the  best of our abilities and then move on. Till date I don’t listen to my songs  out of fear of having made mistakes.  If you ask me to identify all my songs I wouldn’t be able to. I remember  friends would call up and say, ‘Lata,  mujhe tumhara  yeh gana bahot achcha laga’ They would name  a song that I had supposedly  recorded  recently and which was blaring on  the radio. But  I’d  wonder, ‘Yeh kaun sa gaana hai?’ Best  not  to rest  on one’s laurels. At least I’ve never done that.”