Jennifer Lopez, Scarlett Johansson, Lupita Nyong'o & others get together for actresses roundtable 2019 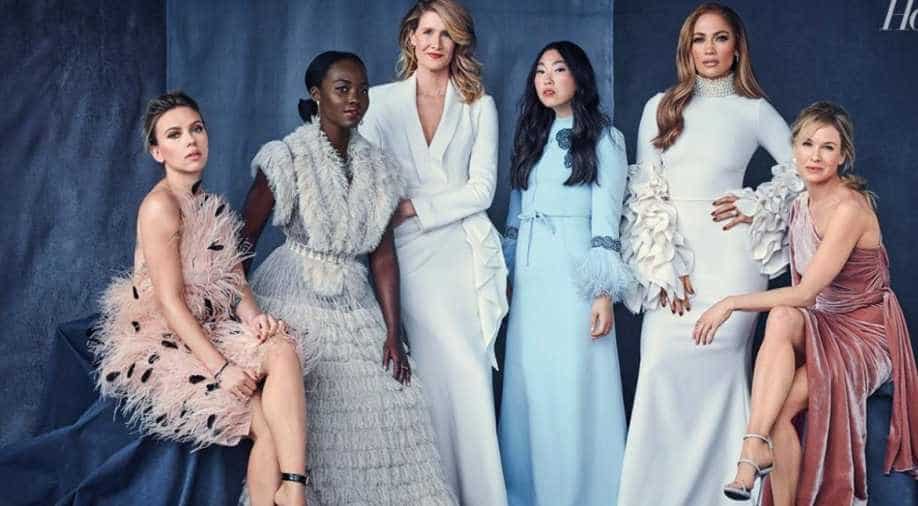 They got together for The Hollywood Reporter's annually held actresses roundtable as they were a part of some amazing films and gave stellar performances this year.

As the actresses roundtable took place in Hollywood yesterday, the event saw the likes of Jennifer Lopez, Scarlett Johansson, Lupita Nyong'o, Renee Zellweger, Awkwafina and Laura Dern speak about what matters to them, changing scope of work for women in the entertainment industry and a lot of other stuff.

They got together for The Hollywood Reporter's annually held actresses roundtable as they were a part of some amazing films and gave stellar performances this year. Laura Dern, 52, pointed out at the start of the conversation that "this is a rare gift that we get to be in community like this." She will be seen reuniting with Scarlett Johansson, with whom she stars in Noah Baumbach's 'Marriage Story'.

Johansson, 34, who also makes an impression in Taika Waititi's Jojo Rabbit, is joined by Hustlers' Jennifer Lopez, 50, 'Us' star Lupita Nyong'o, 36, and 'The Farewell' star Awkwafina, 30.

Responding to when they have been most afraid or intimidated by a role, Renee spoke about her portrayal of Judy Garland in her biopic. She said, "It happens every time before you start. Your impostor syndrome sneaks in —this will be the time that everyone knows you're a fraud and you're going to get fired. It becomes less fear and probably more just a sense of responsibility as you get older, and I've been doing it a while." This while Lupita Nyongó said, "I would say that Us terrified me quite a bit" and added, "Every time I work, I wonder whether I have what it takes to do that particular role, because we're in a business where we're always starting again: You start with ignorance with every role. And the preparation is about moving from that ignorance to hopefully a sense of expertise by the time the film wraps."

JLo also spoke of her recent film 'Hustlers' as she said, "This was the first time in a long time that I was actually terrified, really scared, to do that opening [pole dancing] number, which I suggested, of course. It was my fault that I was there to begin with. It wasn't written in the script. And I was like, no, she's the big money-maker at the club — she has to show why. We can't say it, we have to do it. I have to dance on the pole, I have to show them, I have to go there."

Scarlett Johansson spoke about opportunities being laid bare for a number of women than ever before. She said, "The climate is so different now, there's so many wonderful opportunities for women of every age to play all different types of people. When I was working in my early 20s and even my late teens, I felt that I got somehow typecast as hypersexualized, which I guess at the time seemed OK to everyone — it was another time — even though it wasn't part of my own narrative. It was kind of crafted for me by probably a bunch of dudes in the industry."

She went on and said, "But it was really difficult for me to try to figure out how to get out of being an ingenue or the "other woman" because it was never anything that I had intended. I had to shake it up a little bit. I remember thinking at the time that maybe I needed a different job in this industry that would be more fulfilling because it seemed like there was nowhere to go. And so I actually had the opportunity to do an Arthur Miller play on Broadway, and it totally reset my whole way of thinking about how I could work, and what different kinds of opportunities could be available to me."

Johansson also shared her thoughts on Martin Scorsese's comment on Marvel films. She said, "There's certainly a place for all kinds of cinema right now. People absorb content in so many different ways. I actually didn't totally understand that statement, because I guess I needed some insight as to what it meant exactly. Because to me it seemed a little old-fashioned. But somebody pointed out to me that perhaps what the statement meant was that there's no room for smaller films, because the cinema is taken up by these enormous blockbusters, and smaller movies don't have a chance at the theatre, which I hadn't actually considered and think is a valid point. But I also feel like there's sort of this shift in how people watch stuff and there's all these platforms for different kinds of [content]."

Nyong'o meanwhile confronted the idea of being an actress who works with underrepresented directors. She said, "It's definitely not a calculated thing. These are all directors who have offered me the most interesting roles. And I've taken them. I haven't really thought about the demographics of the director I've been working with. This #MeToo time, this Time's Up time in the industry, is about allowing for equitable representation. And because I am a black woman, I am a beneficiary of that movement in the work that I've been able to do. I'm very grateful to have come into the industry at the time that I have because I am benefiting from the efforts of a lot of other women who have come before me, other black women who have had it a lot rougher than I have. This is a time where there is a concerted effort to consider diversity and inclusion. What I really want is for it to not be a fad, not be a trend. Right now it's really dope and cool and on-trend to work with women and underrepresented groups, but the moment of maturity in the industry is when it is just the norm, you know?"

Awkwafina added to these points and said, "There is a genuine urge for audiences to want an industry that represents their life. That's why I'm very positive about the direction that we're going in. I don't think that having people of different cultures or women will be a trend because I think that it's what people want. We're changing as a society."

The actresses also spoke about their respective films, their success stories of the year and how things have changed post #MeToo and #TimesUp.