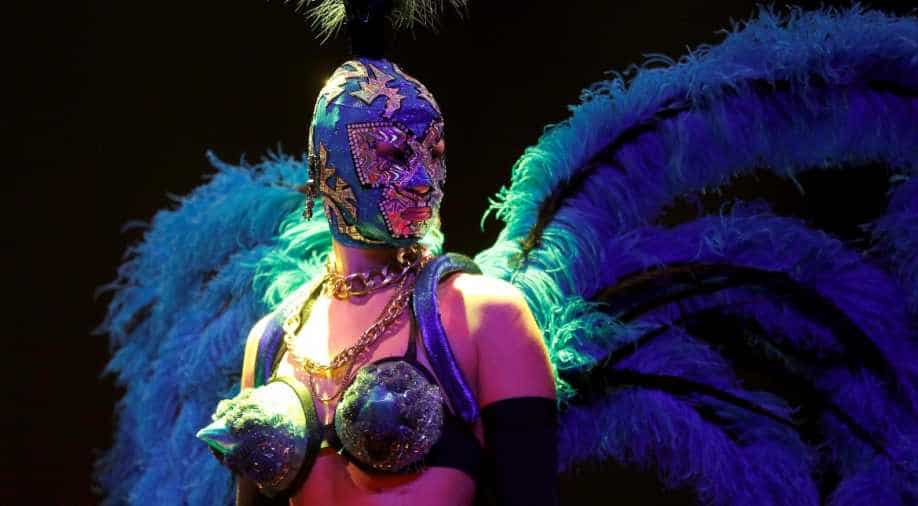 A member of the cast of Jean Paul Gaultier's "Fashion Freak Show" rehearses prior to the show's opening at the Southbank Centre in London. Photograph:( Reuters )

The two-hour extravaganza, previously at Paris' Folies Bergere hall, sees actors, dancers and performance artists take to the stage as an eclectic mix of characters to recount Gaultier's memories from his nearly 50 years in fashion.

French designer Jean Paul Gaultier brought his lively and eccentric 'Fashion Freak Show' to the London stage this week, a musical production looking back on his life from childhood classroom sketches to the Paris haute couture catwalks.

The two-hour extravaganza, previously at Paris' Folies Bergere hall, sees actors, dancers and performance artists take to the stage as an eclectic mix of characters to recount Gaultier's memories from his nearly 50 years in fashion.

Gaultier, who held his first catwalk show in 1976, has long been known for pushing boundaries in fashion, blurring the lines between men's and women's clothing, something regularly referenced in 'Fashion Freak Show'.

Asked what he wanted audiences to take away from the show, Gaultier said: "To appreciate different kinds of beauty, that people are different."

"We are a world made of different people and anyone of us has beauty. You have to see it," he told Reuters after Wednesday's performance.

Opening with dancers dressed as bears wearing conical bras - the young Gaultier first created the look on his childhood teddy - the show features plenty of his staple corsets, skin-tight outfits and outlandish as well as provocative pieces.

Against the backdrop of a giant screen where Gaultier's famous friends performed for the show, models danced to funk, disco, punk or rock as they recreated professional and personal moments in the designer's life, including his childhood influences, visiting London and major catwalk shows.

"My dreams as a young child became reality ... to see it I've lived that already but to make it I wanted to give homage to all the people that inspired me, the cities that inspired me," Gaultier said.

Gaultier, who has dressed a spate of celebrities from Oscar winner Marion Cotillard to singer Lady Gaga, quit ready-to-wear fashion in 2014 to focus on haute couture and his perfume line.

Asked if there was anyone he would like to still dress, he said: "Queen Elizabeth of course but I know it's impossible ... In reality, I think it's the people who like what I'm doing. I like to dress them."