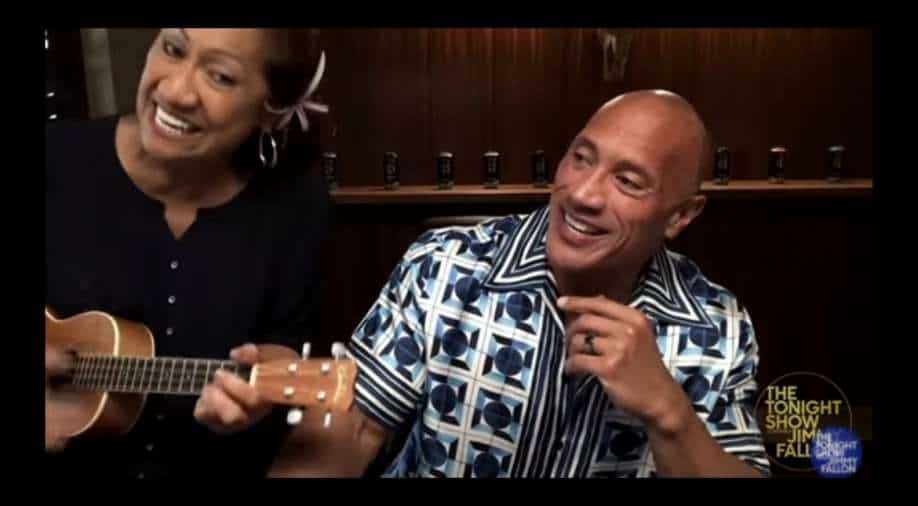 During a virtual interview with Jimmy Fallon, Dwayne Johnson’s mother stole the show as she entered the frame and played ukulele.

You know who was the highlight of the latest episode of The Tonight Show Starring Jimmy Fallon and featuring Dwayne Johnson aka The Rock? Well, it was his mother!

During a virtual interview with Jimmy Fallon, Dwayne Johnson’s mother stole the show as she entered the frame and played ukulele. It so happened that Jimmy Fallon asked Dwayne if his mother could play the music instrument to which the actor responded “Oh yes” and then called off-screen to his mother, "She's right here."

Dwayne’s mother, Ata, 72, appeared on the screen and played some music. She played a rendition of the Samoan song ‘Savalivali Means Go For a Walk’. Dwayne joined his mother in on the song.

They sang: "Savalivali means go for a walk / Tautalatala means too much talk. Alofa ia te oe means I love you / Take it easy, faifai lemu."

To add, one song wasn’t enough for Ata as she said she had one more to which Dwayne Johnson replied, Ata announced, "We have one more!" to which the actor said, "No we don't have one more! What's happening?"

Fallon couldn’t believe this happened and said, "Oh my — I love you! I'm sending love right back to you. Mom just crushed by the way! You just stole the interview,” and added, "You're unbelievable. You are a superstar."