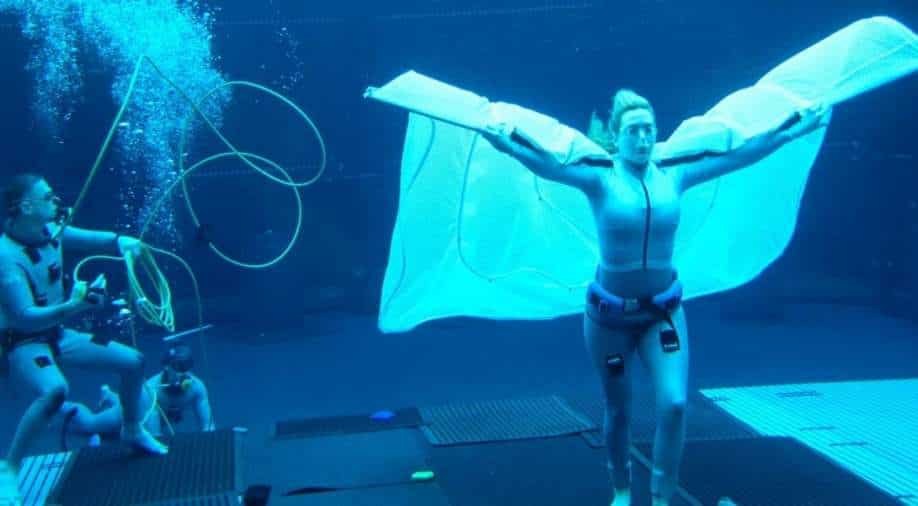 In BTS images, Kate Winslet can be seen showing off her free-diving skills. Kate’s character is called Ronal in the film.

It is said that in ‘Avatar 2’, the director James Cameron and his team have revolutionized underwater motion capture technology. Back in September, Sigourney Weaver performed an underwater stunt and then came up to catch her breath while giving the camera a thumbs up in a behind-the-scenes sneak peek.

Kate Winslet can be seen at the bottom of a production pool walking across the floor with her wings spread wide. She is performing as Ronal, a character who is a "water person."

From Kate Winslet's recent interview in @THR: “I had to learn how to free-dive to play that role in Avatar, and that was just incredible. My longest breath hold was seven minutes and 14 seconds, like crazy, crazy stuff.” pic.twitter.com/ZYAmZdNgHS

From the set of the Avatar sequels: Sigourney Weaver never shies away from a stunt, not even when it's underwater! pic.twitter.com/MnZ0cgGGjP

To prepare for her Avatar 2 role, Winslet had to step outside of her comfort zone to get used to being underwater for long period of time. In an interview dated August, she said, "I had to learn how to free-dive to play that role in Avatar, and that was just incredible... My longest breath hold was seven minutes and 14 seconds, like crazy, crazy stuff."

These Pandoran creatures are out of this world — Happy #WorldAnimalDay, Na'vi Nation! pic.twitter.com/FZOsz3ynfQ

On her collaboration with James Cameron, Kate said, "It was so wonderful to work with Jim again. Time has changed him. Jim has become a father a few more times over. He is a calmer person. Chilled. You can just feel him enjoying it more this time."

‘Avatar 2’ is scheduled to open in theaters December 16th, 2022. The sequel takes place 13 years after the events of the original movie.