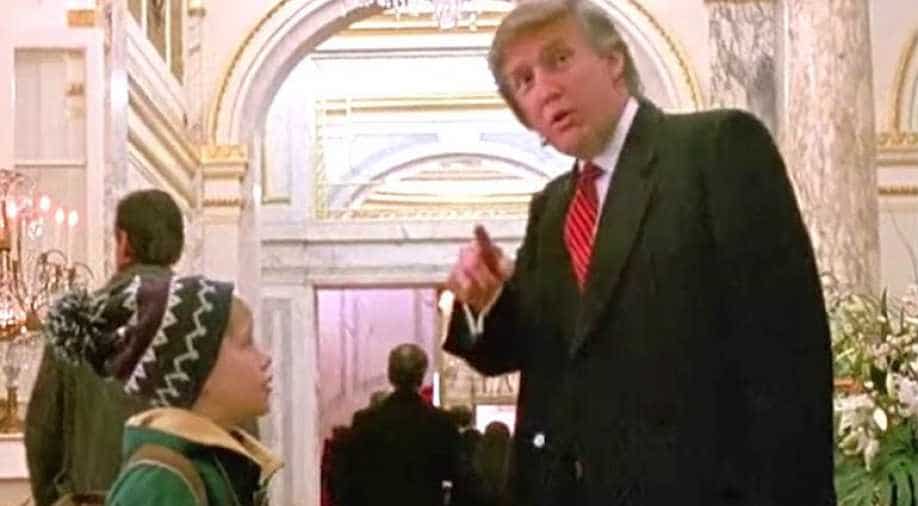 Macaulay Culkin and Donald Trump in a still from 'Home Alone 2' Photograph:( Twitter )

Donald Trump had a cameo appearance in 'Home Alone 2' where Macaulay Culkin's character Kevin McCallister visited the Plaza which was owned by the US President at that time.

Actor Macaulay Culkin, best known for playing Kevin McCallister in the 1990s classic 'Home Alone' is not a fan of Donald Trump. On Wednesday, the actor showed his support to one fan's call for the removal of President Trump from a scene in 'Home Alone 2: Lost in New York'.

Trump had a cameo appearance in the film where Culkin's character Kevin McCallister visited the Plaza which was owned by the US President at that time.

Another fan took a step further and edited Trump out of the particular scene with a young Culking walking around the Plaza Hotel and asking no one in particular, "Excuse me, where is the lobby?"

The clip then cuts to silence where actually Trump's single line used to be. Culkin replied to the post with a "Bravo."

Earlier in an interview, the film's director Christopher Columbus had revealed that Donald Trump's cameo in the film was at his own request. Trump had reportedly allowed the crew to film at the Plaza with the condition that he would have a cameo in the film.

"We paid the fee, but he also said, 'The only way you can use the Plaza is if I'm in the movie,'" Columbus told Insider in November last year. "So we agreed to put him in the movie."

Also read: Chrissy Teigen, Cardi B and others react to Trump's impeachment news

On Wednesday, Trump became the first American President to be impeached twice. Trump was impeached for inciting violence at the Capitol last week when a mob of his followers broke into the Capitol building.