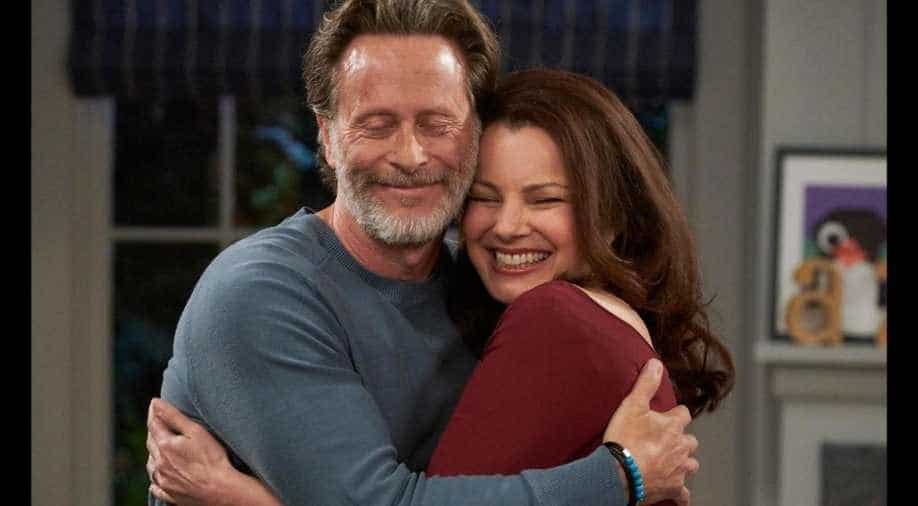 In an exclusive chat with WION, Hollywood stars Fran Drescher and Steven Weber open up on new show 'Indebted', coming back to TV comedy and Hollywood in post COVID-era.

How difficult is it to move back in with your kids once you have finished off all your wealth thanks to poor financial management? And is it too much for the young couple to host one side of the parents when they have nowhere else to go? Exploring a similar plotline and offering laughs with situational comedy, stars Steven Weber and Fran Drescher get together in ‘Indebted’ -- a new show that deals with the life of a young couple that is forced to take in the man’s parents when they land up at his door one day in demanding circumstances.

With ‘Indebted’ streaming in India on SonyLiv, the older couple played by Fran Drescher and Steven Weber got talking to WION about the show, Hollywood in post COVID-era and why they love India!

Calling the experience “amazing” and heaping praises on one another, both Fran Drescher and Steven Weber admitted that they wanted to work with each other for a long time.

WION: With the entertainment industry going through a major overhaul due to the coronavirus, has the digital medium taken over theatres?

Fran Drescher: I can't even imagine what the whole world would be like if not for technology which has allowed us to continue to work, communicate and become inventive-creative in new and different ways. Out of necessity, comes invention. During the lockdown, I have done interview series, zoom sessions, organised Corona care on my website where people can go for free to the site and learn practical advice on how to prevent getting COVID and how to support your body if you are infected with a virus. I've seen creative people doing their comedy where they self taped and it's gone viral on social media. I think Instagram, YouTube has really blown up and it's a fascinating time especially here in the United States where we were so slow to really take responsible measures to flatten the curve. We don't know when life is going to return as it was prior to the lockdown period, so I believe we're going to see more and more creative ways of entertaining people.

WION: Steven, what is your take on returning to TV comedy. Have you observed any major changes over the years?

Steven Weber: I have observed that for me, the major changes have been in the structure of a script, the structure of a so-called half an hour show. It’s all become quicker, is heavily edited. The content and treatment of humour like sexuality in the behavior, human interactions have changed. It’s all more graphic. But what has really shifted is the way sitcoms are produced and written. I was born of a tradition that values lengthier interaction between characters like what we saw in a lot of series in the 90s and 2000s. I think what we were attempting to do in Indebted was to combine the two methods to give a little bit more depth, a little more emotional grounding to their structural demand, which is, you know, shorter scenes, more clip shows, so that's really been the major change I've seen. I think it's still important to not only be funny but to have a kind of grounding in reality and that I think has stayed constant.

WION: How different or same will it be for Hollywood to function in post-COVID era, in a time when people would have gotten used to getting entertained from the confines of their home?

Fran Drescher: We don't have a crystal ball so we don't really know what the future is going to look like but as a health activist, I would hope that there is an elevation of consciousness where people will start asking themselves why this happened and start looking at causation for all levels of disease. I would hope that within our industry, which has so much power and influence over the hearts and minds of the viewers, that it will come into play on a creative level -- in the storytelling. Because all indications are that this virus came out of factory animals and the trafficking of exotic animals and that is something that has to be looked at and stopped. We as consumers have to stop supporting irresponsible manufacturing practices that in the end affects everyone on the planet because we are all interdependent and interconnected. It's time that we rise up, wake up and start living more responsible lives because we're all in this boat together and if we continue to abuse it, it's going to impact us and our lives and in the end drive us into our own extinction.

Steven Weber: Here's the thing. I'm just gonna digress for one second. Everybody thinks they know Fran Drescher for all the things that she's famous for. What they will learn now, that she is so deep and important and thoughtful. She’s more than just any comic character. It was so great coming to work because I knew that I was going to be hanging out with somebody who was deep and not your normal shallow actor.

WION: How do you feel about the show reaching your Indian fans?

Fran Drescher: I'm just really happy that the show is going to India. It’s a great country and I was actually married to an Indian at one point and some of my dear friends are from India. I appreciate the 5000 year history and often when I speak about Western medicine, I bring attention to ancient Asian wisdom when it comes to our health practices. So it's lovely to have this project reach India and be connected to all of you so far away from where we are here in California.

WION: Is there now an unwarranted pressure to bring diversity in shows and films to cater to all audiences that were earlier, either neglected or typecast in the narrative? How do you feel about new projects challenging the status quo?

Fran Drecher: As a writer, producer of ‘The Nanny’ during the 90s, I can say that the cast on the show was much more segregated. It seemed like most shows during the time either had all-white or all-black cast. While I was doing The Nanny as the executive producer and creator, as well as the star, I felt like I was very sensitive to that. I wanted to bring in people of colour into what was essentially an all-white cast as I didn't really like that the show was so white. So we began by bringing in grandma’s boyfriend that was played by Ray Charles and then Ray ended up having a family of his own. That was played by Whoopi Goldberg and Bryant Gumbel and Coolio. This was kind of breaking the norms in the 90’s and I'm very proud that as we were one of the first shows to have a mindfulness of that and integrated the show in a more meaningful way. Then in the next series that I wrote and created and executive produced, ‘Happily Divorced’ had my ex-husband as gay. The series regulars besides me and my gay ex-husband was my black best friend. My employee on the show, who was another series regular was Latino. So I have always been very aware of that, and very interested in bringing forward, in a very meaningful way, a rainbow of people.

Steven Weber: I don't think I feel pressured so much as feeling liberated. It's important to have programming that reflects the audience. There was a time when TV was dominated by white cultural roles, but that's no longer the case and it's important to change. It's important to change with the time as they say, if you hang on, you will be dragged and I think it's important for the industry to not be dragged by the past choices they've made. Fran just pointed out that as a show creator, you have an obligation to acknowledge real people. As an actor, you also have to acknowledge that there are real people and it's not enough to play, for a white person, a person of colour because then you’re taking away opportunities from other actors who have in the past had fewer opportunities. I think diversity is important, not only to acknowledge but to really explore. As a middle-aged white guy, who was raised on predominantly white media, it’s been regulatory for me to see the vast swath of diverse actors, people from diverse backgrounds, who are absolutely brilliant. It's easy to become routined in a kind of expectation that everything in the world, everything in our country will look just like me and that's no longer the case. It's called whitewashing and truth be told, however families were represented on TV in the 60s and 70s, did not really reflect what was actually happening in the world and certainly in America. What we are seeing now is more reflective of the American landscape, which is extremely diverse, and has to be represented in order to normalise it for everyone.

‘Indebted’ is NBC original sitcom that aired its first episode in the US on February 6, 2020. The show is available to stream on SonyLiv in India and other parts of the world. It premiered in India on August 21, 2020. ‘Indebted’ stars Adam Pally, Abby Elliott, Jessy Hodges, Steven Weber, Fran Drecher and others.