David Letterman is getting slammed over resurfaced interview with Lindsay Lohan 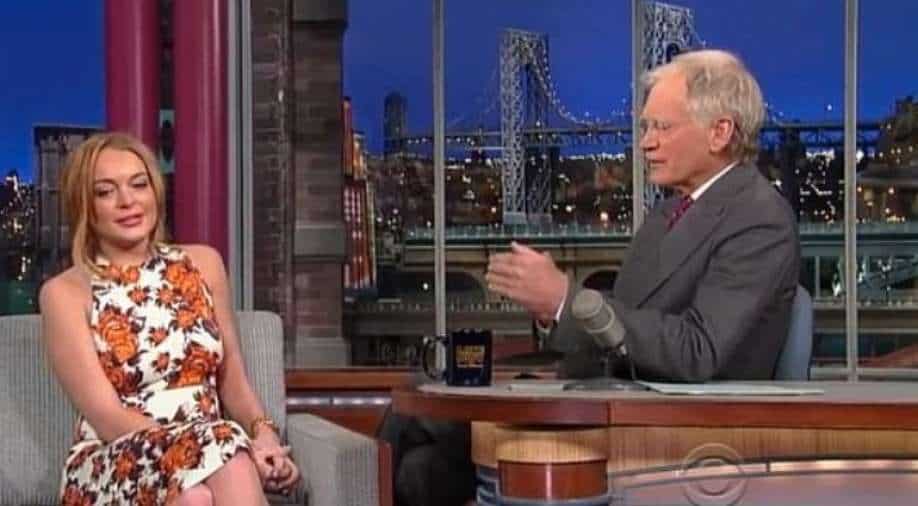 A still from 2013 interview with Lindsay Lohan Photograph:( Twitter )

During the show, Lohan was grilled by the famous host about her history and was constantly asking her about the time she spend in rehab while she kept telling him to stop.

David Letterman's old interview with actor Lindsay Lohan is under the spotlight and not for a good reason! The old interview started making rounds in wake of the Britney Spears documentary in which she talked about some misogynistic and inappropriate interviews that she had given during her young days.

Later, in light of the Spears revelation, netizen came up with David's old interview with the actor, who appeared on 'The Late Show With David Letterman' to promote her 'Scary Movie 5'. During the show, Lohan was grilled by the famous host about her history and was constantly asking her about the time she spend in rehab while she kept telling him to stop.

''Aren’t you supposed to be in rehab?,” Letterman asks Lohan, even though the actor didn't respond well to him and said, she would be entering rehab on May 2, and she'd be there for three months, and when asked about how many time, she’s said, ''several times before''.

In the interview, he continued mocking her personal struggling days and asked, “What are they rehab-ing? What is on their list? What are they going to work on when you walk through the door?” Letterman continues as he gains laughter.  After which Lindsay said, “We didn’t discuss this in the pre-interview.”

''I think, to be honest, I’m the happiest when I’m working, and the healthiest. And this is an opportunity for me to, you know, focus on what I love in life. And I don’t think it’s a bad thing. I think it’s a blessing.'' later she added.

Letterman continued to ask her about the addiction issues. to which she responded, “Now you sound like Dr Phil.” The wouldn’t let the subject go, Lindsay told him, “We’re here for a movie. Let’s stay on the positive.”

Later on in the interview, Letterman takes out the list of things that have been said about her and she quickly grabbed the list so she could take a look at it first. After reading it over, she said, “You can’t make a joke of it. That’s so mean. We’re not doing that.”

Here's how people reacted to the old interview.

This Lindsay Lohan interview on David Letterman in 2013 is horrifying to watch now. pic.twitter.com/lZxKVvbVB0

David Letterman owes Lindsay Lohan an APOLOGY LIKE YESTERDAY. This is disgusting. I’m tired of interviewers weaponizing mental health & using personal struggles as the butt of your ugly jokes !!! Glad she was standing up for herself here. But even the audience laughing is 😡🤬 https://t.co/UbqwUi71PR

David Letterman thought it was funny to joke about Lohan's substance abuse problems in this way? Wow. I've never seen this. It isn't horrifying to watch now. This was always horrifying. And this clown thinking it's fine to put her down this way. She's a human being. https://t.co/WOhKZDcdIE

Before the interview, Britney Spears documentary has created controversy for Justin Timberlake, who faced backlash due to his public treatment of the singer 20 years ago, he later issued a public apology to his former girlfriend on social media.