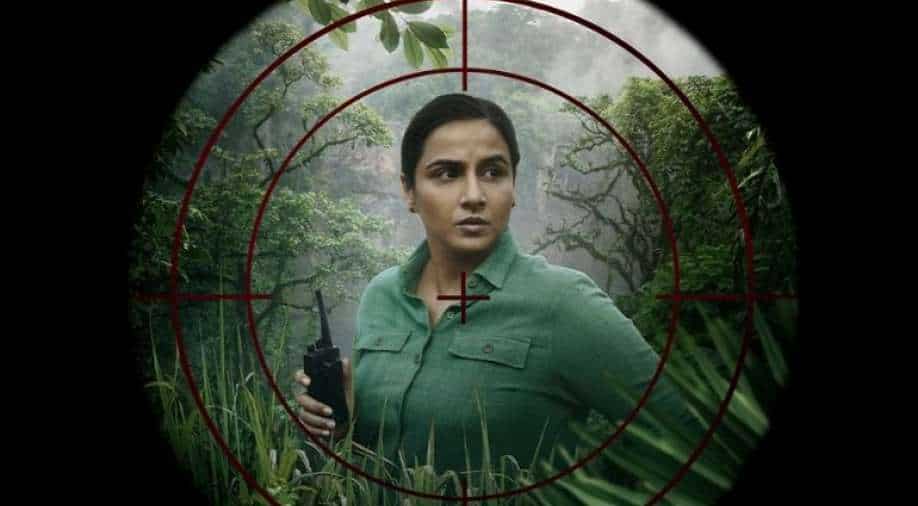 Vidya Balan's new film 'Sherni', directed by Amit Masurkar, works because it provides for a refreshingly new story. Sans the melodrama, the film takes the viewers deep inside the jungles and tells an honest story

If Amit Masurkar's 'Newton' dealt with farce around elections, then his latest 'Sherni' slyly talks of patriarchy amid a tiger hunt in the deep jungles of Madhya Pradesh.

Featuring the incredible Vidya Balan, 'Sherni' delivers a strikingly fresh story and perspective on the rules of the jungle.

A tigress is on the prowl - attacking strays and villagers who live near the jungle. Newly appointed to the area, forest officer Vidya Vincent (Balan) not only has to capture the tiger and release it in the nearby national park area, but also deal with middlemen, local politicians and greedy hunters, who are busy proving their machismo and are quick to rebuff Vidya as she is a woman.

Challenges are in plenty for Vidya. Her boss Bansal (Brijendra Kala) is incompetent, she also had to deal with the local MLA and his opponent, both in their bid to outdo each other forget their duties towards the village. Then there is Pintu Bhaiya (Sharat Saxena) who is the alpha male and sure that only he can save the village and its people from the tigress.

It's a lonely life for Vidya at the forest. While her male colleagues unwind with a drink and Bollywood item numbers in the evenings, Vidya has a stray kitten for company in her quarters for dinner. Her husband on video call advises her to not quit, as a govt job provides the security which his private job doesn't. Her mother-in-law wants her to be dressed more like a bride than an officer on duty and keeps asking her for kids. But amid all this chaos, Vidya remains honest and diligent in her work- wanting to do the right thing for the villagers and the animal on the prowl.

Masurkar and writer Aastha Tiku provide a no-frill grim story of how man plays an active agent in destroying the ecosystem by poaching and encroaching a space that is not meant to be his. 'Sherni' provides insight into the jungle and the people who love around it and highlight the importance of maintaining an ecological balance which most humans tend to ignore. Without being too preachy, the film drives home the point well. It also takes a sly dig at patriarchy and the inherent nature of men to not take a woman in charge too seriously but it never lets the protagonist break down. Vidya Balan sheds her natural exuberance to deliver a restraint performance as a woman who knows her job and her ways around a system that has problems in plenty.

At a time when many of the makers have been called out of miscasting, Masurkar uses relatively new faces to play the locals in the film. So unlike 'Article 15' where Sayani Gupta has painted two shades dark to play a Dalit, here actress Sampa Mandal plays a feisty village woman Jyoti. The casting is far more accurate- giving a sense of authenticity to the film's narrative.

The film, though appears stretched even in its 2-hour runtime. The film meanders in the middle a bit with all characters going on a wild goose chase to look for the tiger, failing each time to capture it. Much like Newton, this film too has several moments of silences where the characters emote through the expressions and do not speak much.

'Sherni' has great camerawork by DOP Rakesh Haridas, who gives a documentary-like feel to the film as he captures the minutest creatures of the forest well. The shots of the forest provide a transition in between scenes and the night shots are stunning, where flashlights and car headlines break the monotony in the dark and dense forest.

'Sherni' works despite its slow pace because it provides for a refreshingly new story. Sans the melodrama, the film takes the viewers deep inside the jungles and tells an honest story. It has credible actors, each playing the role perfectly and its leading lady Vidya Balan, steps away from a cheerful persona to deliver a restrained performance.