EXCLUSIVE: Abhishek Bachchan and Nimrat Kaur on their experience of filming inside central jail for 'Dasvi' 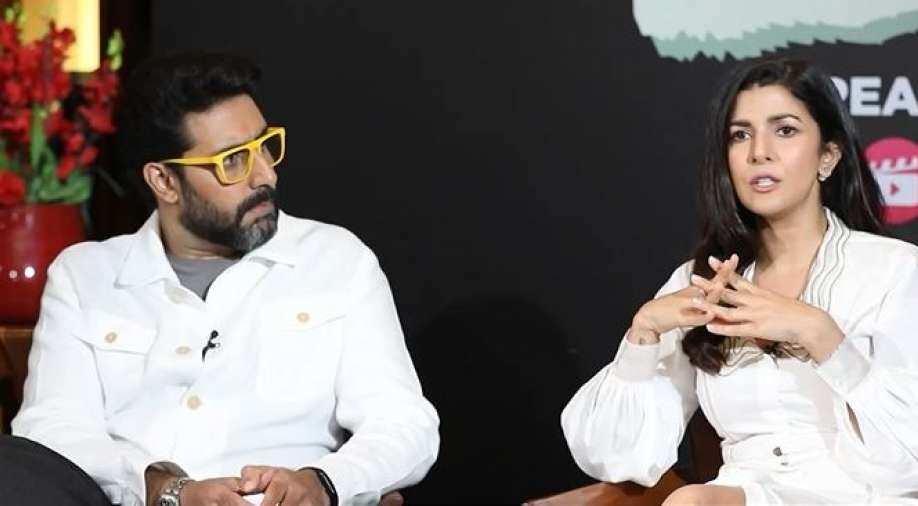 WION caught up with the team of 'Dasvi'- actors Abhishek Bachchan and Nimrat Kaur and director Tushar Jalota as they spoke about their film and the experience of filming inside a central jail.

Earlier this month, WION got the opportunity to interact with 'Dasvi' cast Abhishek Bachchan, Nimrat Kaur and director Tushar Jalota. The fictional film is based on Gangaram Chaudhury, who decides to take his Class 10 exams during his stay at a correctional centre. Meanwhile his wife, Bimla Devi takes over as the Chief Minister of the state in his absence. When you look back at recent political history, one might find a lot of similarities to real incidents, however, the cast told us that real events did not play a role in building the narrative of 'Dasvi'.
Here's an excerpt of our conversation.

Q: You promoted 'Dasvi' inside the Agra Central Jail. It's not something that most Bollywood films do. Can you share your experience?

Nimrat Kaur:  I filmed the least number of days inside the jail and honestly, I had no idea of what the jail looked like, I had not seen any pictures or anything like that, When I walked into that environment, I was still waiting for the jail to start. For a very long time, because it was so pretty, there were gorgeous lawns, big space and I went there at the hour when shaam ki puja ho raahi thi, the evening prayers were going on so there were bhajan kirtans going on, I saw from a distance there was a temple, massive playground, I was waiting for the jail to start you see. Because I thought that for some reason (looks at Tushar) and I don’t know if I told you this, (looks back at me) but I thought that the unit had created sort of a clean environment for the actors to shoot and I kept waiting, and you know in my mind what jail looks like, you know you expect it to look like really dark grim, punishing in nature, I didn’t see any of that. It was over by the time we got to the barracks part even. They were shooting a very big scene, there were a lot of people around. I was astounded by the cleanliness, and the safety you felt, especially as a girl walking in. Even though you are surrounded by bouncers, policemen, the authorities and guards and whatnot, you know as a girl you feel a little bit vulnerable where you know people are in for not being socially accepted elements. I did not feel unsafe even for a second, Just the way the different section of the jail was, I couldn’t have prepared myself for an environment like that.

Abhishek Bachchan: Yes, it was my first time and it wasn’t like anything that I had expected. You know we all have these preconceived notions about what jail would look like and what the inmates would be like and they broke all those stereotypes. I remember asking Tushar on our first day of the shoot, are you sure this is jail because it looks more like a country club. Then as a citizen, you feel proud that your correctional facilities are so progressive but then the point is, hey we are used to the public by and large preconceived notion that jails look like this. So are they gonna believe that jails look like this, that this is a real jail.  So then it was so clean and well maintained the inmates were so disciplined and well-mannered, that the discussion actually came about that are you sure we need to be shooting it here, we need to shoot it in place that is more suited to what we think jails are like. So it was a pleasant surprise and it was a pleasurable experience we would obviously like to thank all the authorities for granting us the permission and there were severe protocols in place. They were very very cooperative, and it was a memorable experience.

Tushar Jalota: Yeah, likewise, as he said. First getting permission was tough to process, but once we got inside, you know, it was spick and span, so clean, and people were so disciplined out there. Although we did not like using the inmates in the film. They were in the background somewhere, but they did not disturb us at all, it was very peaceful.

Q: As a director how did you do your research? Did you visit the inmates quite often?

Tushar: No, I did not. (Laughs) I hope not to go there, not to go there ever again. See there was a story, you know what we wrote down and I wanted it to be as authentic, and I saw some pictures of this jail, and I went there and found some places I wanted to shoot at, and I said you know we should go and look at the place. And I went there and I found the spot I wanted to shoot. The authorities were really cooperative and ensured that the entire process was smooth and I'm glad that it happened and it went on very smoothly.

Q: What really caught my attention was Nimrat and Abhishek's raw dialect. What kind of training did you go through?

Abhishek: I think as actors you are very lucky when you get such well-defined characters and such a great character arc. As actors when you get an opportunity like that you really go for it, sink your teeth into it. So there were various things that we needed to do to prep mostly, as most actors do. As far as the dialect is concerned we had Tushar who arranged a dialect coach who had helped us before and during the filming of 'Dasvi' . The entire quest was to try and be as authentic as possible. There were certain characters that Tushar had written and he wanted them, saw them in a particular way and he wanted that transition from being film actors to bring those characters to be seamless. And I hope that it translated, and you saying that boosts our confidence.

Nimrat: I think that people know that I come from a different country and when I'm employed there is expected to speak a language that is relevant to them, and very often actually, we were talking about this earlier, that you know, my accent, the way I speak English can be a little bit restricted for people to understand completely, because the American accent is very different and sometimes, if the American accent comes from the mid-west then I can't understand that, so an accent is something that is a problem for the world over, for every human being if you put them in a different country.

Q; Nimrat, you have experienced Hollywood as well as Bollywood. Now when you work in the industry, what kind of changes do you see?

Nimrat: Well, you know I started my film career with 'The Lunchbox'. For me that kind of broke norms in every way. It was commercially as successful as it could have been given the number of theatres they were released in at the time. It has been loved as much by you know all kinds of people. I think that the Indian film industry has been going through a subtle but sure change for a long time. We end up noticing things after a while. They become talking points after a while. Thanks to the OTT platforms, there's so much content, there's so much more work happening, I think that change has always been a part of the industry, whether it was the 60s, 70s, 80s, 90s, whenever, you know. What I have witnessed is a sure change in the way parts are written for women. That is something I have experienced quite closely. They no longer want to see girls play the same part. That for me has been a more notable change.

Q: 'Dasvi' touches on the subject of 'right to education as well as a politician who chooses to educate himself while living inside a jail. Can you tell us how the idea came about?

Tushar Jalota: See it's not a film on education, neither is it about education, that's all the backdrop of it. It is an entertaining Hindi, masala film. If there's a message that comes along and the audience picks it, then good we will be very happy, but the intention was always to make a very entertaining film. That's what it is about.