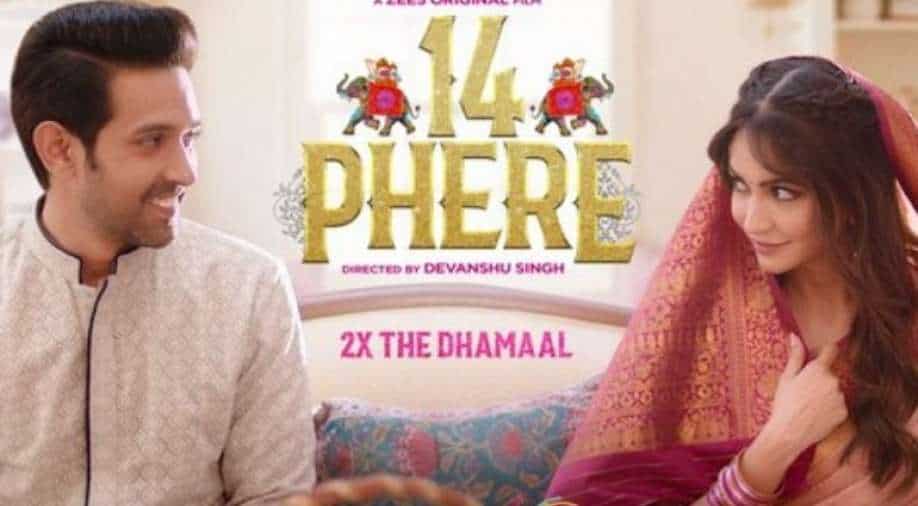 '14 Phere' features a refreshing new pair- Vikrant Massey and Kriti Kharbanda- and has its moments.

Inter caste marriages in India are common but equally frowned upon. Filmmaker Devnashu Singh's film '14 Phere' attempts to look at the complications of such a relationship by giving it a comic twist. Starring Vikrant Massey and Kriti Kharbanda, '14 Phere' doesn't delve deeper into the problems and grave consequences that most inter-caste couples have to see but offer naive and slightly impractical solutions to deal with conservative families.

Massey and Kharbanda play Sanjay and Aditi who meet in college, fall in love and end up working in the same office. They are young bright professionals, living a good life in Delhi in a plush home together. Sanjay though is a Rajput from Bihar while Aditi is a Jat from Jaipur. Both their families, even though affluent, are completely against inter-caste marriage. When Sanjay's elder sister elopes with someone outside her community, she is considered dead in the family with Shyam's father urging the local police to hunt the couple down and kill them as they have defied the family.

Knowing that his relationship too would see the same outcome, Sanjay plans to lie to his parents about Aditi's lineage. An elaborate plan is hatched where Sanjay, involves his theatre friends to play fake parents in from of his and Aditi's respective families.

Singh's film as AIB's Tanmay Bhatt as the creative producer while the other members of the erstwhile group- Gursimran Khamba, Rohan Joshi and Asish Shakya- are thanked in the beginning. Despite the presence of such popular comics, the film's screenplay- by Singh and Manoj Kalwani doesn't provide that many laughs. The film also has Jameel Khan and Gauahar Khan playing the couple's fake parents. Both are known to be good actors with great screen presence, but their characters are underwritten and they have very little scope in the film.

The lead pair of Vikrant Massey and Kriti Kharbanda is refreshing. Kharbanda plays a glamorous big city girl who knows what she wants in life. She has great screen presence and fits the role well. Massey, a gifted actor, holds the film together. He is genuine as Shyam, a man who knows his family well, loves his mother too much to forego a job in the US (because she will get lonely) and is the kind of man who everyone likes to be around.

There are some beautiful moments in the film. When Yamini Das (Shyam's mother) gives a traditional welcome to Aditi's character post-wedding in beautifully written and executed. Gauahar Khan too manages to bring in a smile or two with her exuberance.

The film, though, shines in parts. There are only a few scenes that bring in genuine laughs, but overall the lack of clever writing hinders the film's narrative majorly. There is scope really, the portions when the couple initially meets in college and how their story progresses is enjoyable and relatable, but the film's brightest moments are restricted in the first half-hour of the film. It is also slightly unsettling to see the makers make jokes out of something as grave as honour killing.

'14 Phere' though still makes for a good watch. It has a cute pair, a sweet love story and a good set of actors. If you can overlook the fact that they oversimplify honour killing and the problems of inter-caste marriage with a slightly impractical plot, '14 Phere' can be enjoyed this weekend. A love story, two weddings sans the drama.