'Avrodh: The Siege Within' Review: The show works on content and not execution.

While watching the trailer of 'Avrodh: The Siege Within,' the viewer immediately recalls watching Vicky Kaushal's 'Uri: The Surgical Strike'. But, the makers also mention that this web series is more about planning that went behind the Uri surgical strike rather than the execution.

Based on the chapter 'We don't really know fear' from the book 'India's Most Fearless,' it promises to give us the 'true story'.

Backstory: The Indian Army carried out surgical strikes against terror launchpads along the Line of Control on 29 September 2016. The surgical strikes were carried out nearly 10 days after the Uri terror attack where 18 soldiers were killed when terrorists launched a barrage of grenades at their army base in Uri, Jammu and Kashmir.

Directed by Raj Acharya, 'Avrodh: The Siege Within' has 9 episodes that are each roughly 40 minutes long. The challenge lying ahead of the makers was two-fold. Not only was every Indian already aware of the surgical strike but had also seen a film on the same topic back in 2019. So what more does the show have to offer to its audiences in order to keep them hooked?

Watch the trailer here: Avrodh: The Siege Within

The answer is - the build-up. Watch Avrodh not for the climax scenes, because the viewers are already aware and can predict when the Indian Army or the militants will strike at each other. But, the focus on the groundwork is where all the attention should go. Since the makers had the luxury of time, they were able to add much more matter to the plot than the movie could. For instance, tension between the two militant groups, Jaish-e-Mohammed and Hizbul Mujahideen, how the militant groups trained young boys in camps and the way India dealt with the news of a possible strike internationally.

The show's most known face is Amit Sadh, who plays the role of Videep Singh, the Para (special forces) commander of the Indian Army. Even though the trailer has a lot of his presence, the show sadly doesn't. We only get to see him make an entrance in the second half of the show. Sadh, who has time and again proven his brilliant acting skills, didn't get much screentime here to create an impression. Also, it really feels like he is every director's favorite choice for casting for a man in uniform. Even in 'Breathe' series, we got to see him in the role of a police officer. 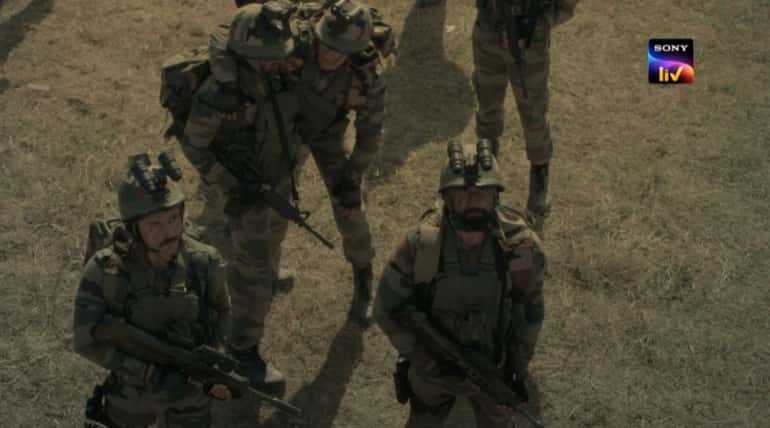 Neeraj Kabi plays the role of NSA Shailesh Malviya, the real-life Ajit Doval. How can an Indian show be complete without a patriotic crowd-pleasing line? Here it goes- While convincing the prime minister to change the way India responds to terror attacks, Malviya says, "We need to show them that India is not only a nation of Mahatma Gandhi but also of Subhash Chandra Bose."

Madhurima Tuli plays the role of senior reporter Namrata Joshi. Passionate about her profession, she proves to be an obstacle for the Indian army to conduct covert operations by breaking the news on TV first.

The shows screenplay is divided into 3 parts. It begins in July 2016 with the Indian Army killing Hizbul Mujahideen commander Bilawal Wani and ends with the chants of Jai Hind after the soldiers return from their mission of revenge.

The duration of the show is a major drawback with the first half seeming a bit dragged. By the time Sadh makes an entry, the viewer can already become impatient. Even though it does pick up in the second half, the battleground scenes are not that impressive. The shots of the aerial view, landscape and the soldiers prepping for their mission which helps create an environment of intensity is not that effective. The adrenaline rush which one is supposed to get while watching a war drama is missing. The music too could have played a part in it. While the sounds of gunshots and bombs are necessary, there are times when the music behind some scenes becomes a source of irritation.

The show works on content and not execution. Watching the Indian Army take revenge for the Uri attacks will always make every Indian proud and even after 4 years, the story has the same impact.

You can stream it on SonyLIV from July 31 onwards.