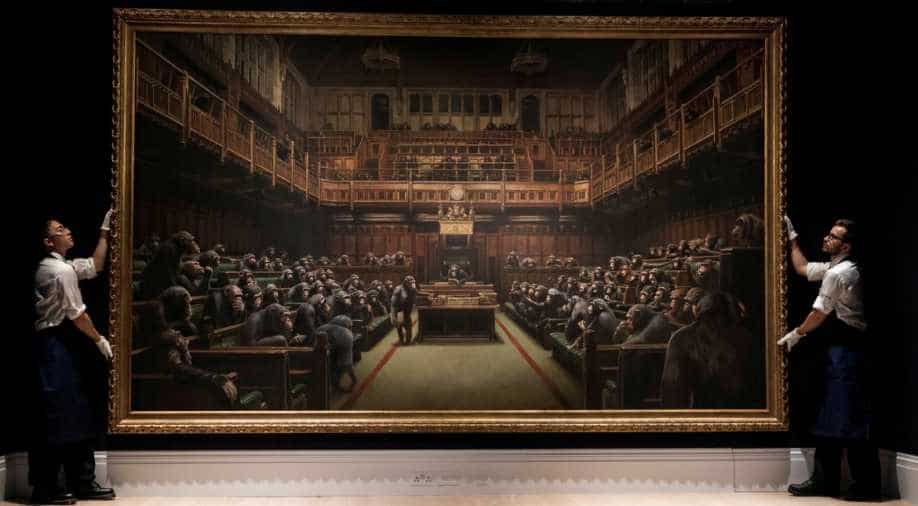 The painting was expected to fetch 1.5 million and 2 million pounds as it sold for more than five times its estimate at Sotheby's in London.

British street artist Banksy’s painting that shows the UK's House of Commons overrun with chimpanzees is now sold at an auction for 9.9 pounds ($12 million).

The painting is called ‘Devolved Parliament’ that is measured to be a 13 ft wide artwork. It was painted by the Bristol artist back in 2009, according to a report by the BBC.

The painting was expected to fetch 1.5 million and 2 million pounds as it sold for more than five times its estimate at Sotheby's in London.

Banksy reacted on Instagram, saying it was a "record price for a Banksy painting" and "shame I didn't still own it".

Sotheby's tweeted the painting had sold "to applause at 9,879,500 pounds - nine times its previous record - after a 13-minute bidding battle".

The auction house said, "Regardless of where you sit in the Brexit debate, there's no doubt that this work is more pertinent now than it has ever been."

As for the painting, ‘Devolved Parliament’ is the artist's biggest known work on canvas.

The auction took place a year after Banksy himself intervened in a Sotheby's auction when his artwork ‘Girl with Balloon’ self-destructed as the gavel came down to become the newly titled ‘Love is in the Bin’.