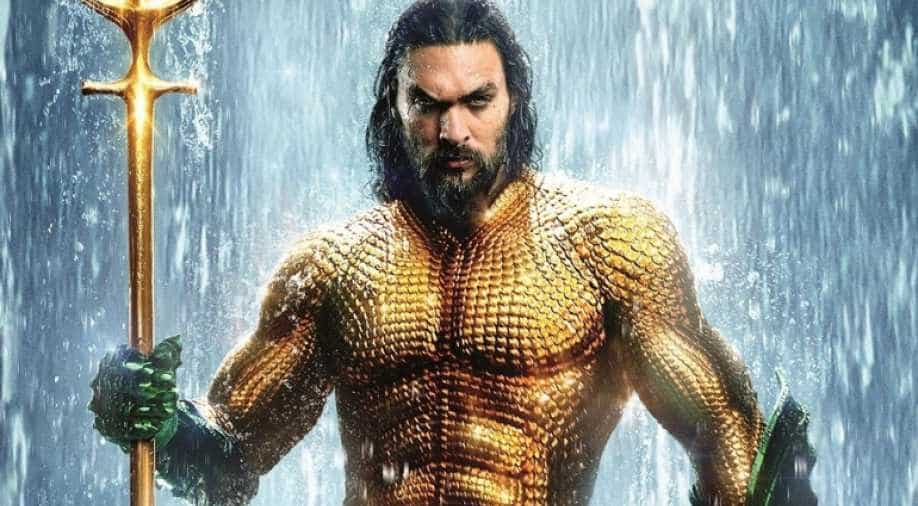 Jason Mamoa in a still from 'Aquaman'. Photograph:( Twitter )

Momoa has an inherent quirk to his personality, he has inherent swag to his demeanour, which makes him a rather interesting choice for a superhero.

Years before Marvel made its foray into films with its league of superhero films, DC comic heroes dominated the genre. With time, as Marvel churned out hugely successful superhero films, year after year, DC struggled to stay afloat. Sure they experimented, sure they had their share of big-budget films, but most felt they really needed to up their game.

In this week's release, 'Aquaman', DC universe somewhat redeems itself. It presents a superhero who may have his share of dark past, might be a bit brooding, but opens up a whole new universe where the action shifts underwater.

Directed by James Wan, 'Aquaman' has Arthur (Jason Momoa) playing a man who belongs to the ocean. He is what in Potter universe people are called- half-blood. His mother(Nicole Kidman) is the queen of an underwater nation called the Atlantis while his father is well... a human. In order to protect Arthur and his father, the Queen leaves her beloved husband and young son and goes back to her underwater life and duties only with a promise to return when there is 'order in the universe'. Years later, we find out, Arthur is a local hero, who saves submarines from pirates, and is a do-gooder. He is aware of his powers but isn't too keen to join the underwater world, for he blames the sea and himself for his mother's disappearance.

Mer(Amber Heard) a princess of one of the sea kingdoms urges him to come and take charge for she believes that he is the true king of Atlantis and can protect both the sea and surface from going to war- something that Arthur's half-brother Orm, the current ruler of the sea, desperately wants. Orm is of the belief that people of the surface have for years exploited the sea and it is time to fight back.  While Arthur is initially disinterested, he eventually gives in and decides to fight, in order to save the people he loves.

At the onset, 'Aquaman' is quite captivating with its visuals, especially when Mer takes Arthur on a tour underwater. The underwater creatures, the mighty sea, and its strength is beautifully highlighted through graphics. It also helps that Momoa makes for a very convincing wild man of the sea. Momoa has an inherent quirk to his personality, he has inherent swag to his demeanour, which makes him a rather interesting choice for a superhero. But unfortunately, the actor's coolness is exploited too little in the movie.

The writers instead indulge in a lot of back stories, history and how the Atlantis co-exists with other kingdoms of the sea which not only stretches the film but makes the viewer lose track of the story after a point.  It also doesn't help that DC universe indulges in melodrama in between where our superhero, who wears his superpowers lightly on his shoulders (And even obliges fans with selfies), becomes emotional and hesitant to fight. Those moments are perhaps the weakest in the film and may put you to sleep. Nevertheless, Momoa alone makes the film engaging and one can only hope that DC uses him and his personality to its full potential in later films.

Just when you are about to give up on the film, it redeems itself in the final battle sequence which is elaborate and takes place of course at sea. With superb VFX and Momoa's towering screen presence, 'Aquaman' ends as a grand visual spectacle.

There are plenty of loopholes. The antagonist played by Patrick Wilson is neither pure evil nor maniacal- qualities that are almost always there in supervillains. Wilson doesn't even look too convincing in his role and you almost empathise with his character and his reason to take over land and sea. The plot ultimately is predictable and doesn't tap into the potential of the lead protagonist much.

'Aquaman' ultimately is to be watched only if you are an ardent DC fan or are keen to see a superhero take charge of the mighty sea. It doesn't overwhelm you and gives you an adrenaline rush only in certain scenes. Superhero films need to be fun, entertaining and should provide the thrills. It shouldn't be an average watch. What's the fun in that?