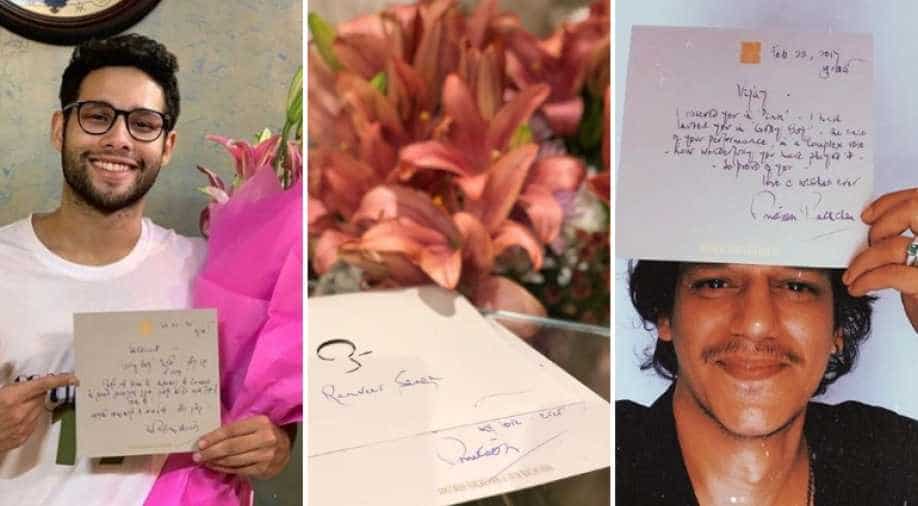 Big B is impressed with the performances of the 'Gully' boys. Photograph:( Instagram )

In Bollywood, you know you have arrived when superstar Amitabh Bachchan sends you a letter of appreciation and a bouquet for your performance in a film.

In Bollywood, you know you have arrived when superstar Amitabh Bachchan sends you a letter of appreciation and a bouquet for your performance in a film. 'Gully Boy'- the film that has captured the imagination of the entire country has also impressed Big B.

The superstar recently sent handwritten notes and flower bouquets to the three actors of the film- Ranveer Singh, Siddhant Chaturvedi and Vijay Varma congratulating them on the film's success and appreciating their performances. Overwhelmed by the superstar's gesture, the three actors took to social media to share their 'trophy' and thanked the veteran actor. Read the review of 'Gully Boy' here.

That’s it. Thappa lag gaya! I’m so so honoured and touched by your gesture, Sir. Always in awe and love, your biggest fan, Vijay. #GullyBoy #Moeen

Also read: Vijay Varma talks about working Zoya Akhtar, his breakout role as Moeen in 'Gully Boy' and why he is selective about the films he works on.

It isn't the first time that Big B has sent flowers and a letter to fellow actors. It has been a tradition of sorts and several prominent actors have received letters of appreciation from the senior actor in the past.

Zoya Akhtar's 'Gully Boy' meanwhile has been doing good business and has entered the esteemed Rs 100 crore club. The three actors along with the director recently visited Mumbai theatres and interacted with fans post the show.