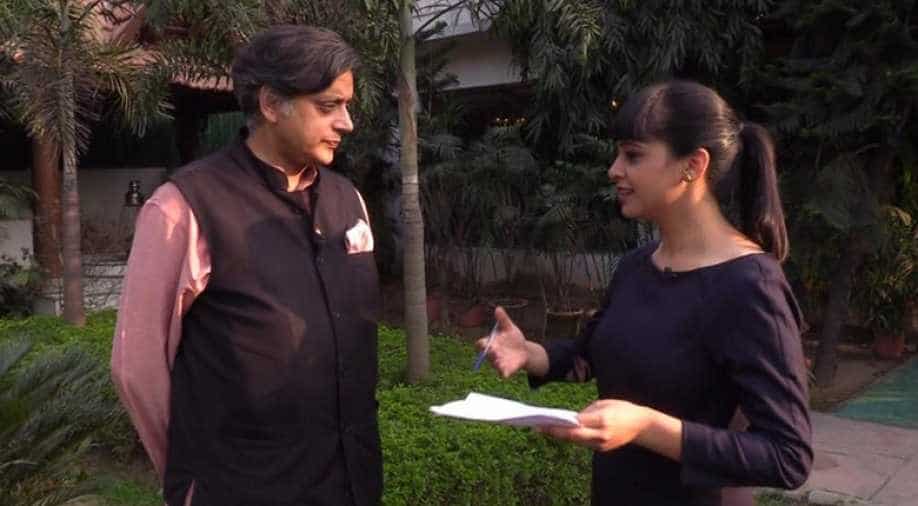 Dr Tharoor called Dhoni's decision to pass on the reins "admirable", and praised his style. Dhoni's surprise retirement as the Indian cricket ODI and T20 captain came just a day before he was to sit down with selectors to pick the team for the forthcoming series against England. The responsibility of leading the team now falls on the able shoulders of Virat Kohli.

JT: MS Dhoni has never lived by the conventional rules of Indian cricket. You would expect India's greatest captain to go out with fanfare. But not him?

Dr Shashi Tharoor: He has got this abrupt departure style which is somewhat surprising in the case of the Test match resignation. I was actually disappointed. Even a bit angry, because I felt it was almost a betrayal to leave a tour that you're captaining the side before the final Test of the tour and announce that you're not playing anymore; that simply to my mind was bad form. But this announcement, on the other hand, was admirable because he was essentially saying, I am not going to leave it too late, one day I have to give up the captaincy. I'll do it on my own terms and I'll do it now when Kohli has been leading the squad, so why prevent him from assuming his natural place. That was a rather impressive decision which obviously could have been done in a more, shall we say, more theatrical way with more fanfare but that isn't Mr Dhoni's style.

JT: The question everyone seems to be asking is, was this the right time? There is a series coming up against England and this could prove to be a distraction...

Dr Tharoor: I think that the right time for any sportsman is the time inside his head when he decides he should go. We've seen a few predictable decisions, we've seen some surprising decisions and we've seen some delayed decisions. If Mr Dhoni feels that his time was right to give up the captaincy while staying in the same breadth that he remains available as a player and as a wicket keeper, then good for him. I think honestly until very recently his keeping is still unmatched in India and his batsmanship, you know he's averaging over fifty in ODIs and not too many players can say that.

JT: The numbers don't lie. This was a man who led from the front. The World Cup final against Sri Lanka is a case in point. Yet his captaincy style was unconventional?

Dr Tharoor: Dhoni was always a better captain in short formats than the Test match. It's because in the test matches you often felt that he was switching on to autopilot. In T20s, because he only had 20 overs to play with, I thought he was much more on the ball, and in 50 overs also he did enough interesting things. But you know a time comes after a while he's been captain for a 199 matches, a time comes after all when somebody says, look, I've been there done that, let somebody else have a go. Certainly Virat Kohli is switched on all the time in a way that perhaps a veteran captain doesn't quite feel the need to be in the same way. It may not be a bad time right now to make that switch.

If Mr Dhoni feels that his time was right to give up the captaincy while staying in the same breadth that he remains available as a player and as a wicket keeper, then good for him. I think honestly until very recently his keeping is still unmatched in India and his batsmanship, you know he's averaging over fifty in ODIs and not too many players can say that.

JT: Talking about the unconventional approach, this was a man who turned to Joginder Sharma in the world T20, dropped Ashwin for the world cup final. The list is endless. Perhaps there could be a comparison with Sourav Ganguly but Dhoni was his own man?

Dr Tharoor: Dhoni was certainly his own man, some of his choices were pure instinct and there's no rational explanation for any of them. I think the Joginder Singh example is very interesting because Harbhajan still had an over left but Dhoni just felt that the way Misbah [Pak cricketer] was batting he was he would think the off-spinner into the grounds and he needed the effort to put somebody who can put some more pace in the ball. But that was an instinctive and a surprising bet. If you remember that after that Joginder Singh hardly ever played for India again, it suggests that you're looking at somebody who in many ways not only defied conventional wisdom but did it in the moment and for the moment. that kind of instinctive captaincy is unusual, it's also impossible to analyse beyond a particular point and it becomes extremely difficult to replicate. Kohli has his own instincts, he's made some surprising decisions even during the recent test series against England. Some of his more unexpected bowling changes which went against the advice of the commentators during those matches... were the ones that got wickets and now we'll look for Mr Kohli's unexpected changes as captain.

JT: What for you has been the defining moment in Dhoni's tenure as captain. Under him India achieved it all, the World T20 win, the World number one ranking in Tests and the ICC Champions Trophy?

Dr Tharoor: Dhoni undoubtedly took Indian cricket to heights that hadn't been known even during the glory days of Saurav Ganguly. Now Saurav as captain had some remarkable victories, most famously the time he stripped off his T-shirt at Lords when his team came from behind with an unexpected victory. But what Dhoni did in accomplishing titles that no previous captain had done since the World Cup in 1983, the T20 we won the very inaugural one and so on. So there were remarkable accomplishments and there were also losses. When somebody leaves we only remember his triumphs and that's how it should be. Just as obituaries never speak ill of the dead, departing test captains are rarely pilloried. But Dhoni also had setbacks and defeats, we never won another world T20 title, did we, after 2007, until we came up with some other good victories. But we lost a lot of tournaments much earlier and certainly we've had setbacks also under Dhoni. So I don't want to imply that everything was great, but he has more victories than defeats and he was somebody who very often was responsible for those victories himself.

Some of his extraordinary performances coming in at number 5 or 6 in an ODI lineup and hitting the winning runs will often stay etched in the memory and there was a feeling that as long as Dhoni was at the crease, almost any target in the last over was not impossible. Increasingly he's also had occasions when he's failed to hit that target but very very often he did it, and I think that is his individual stamp on his captaincy success.

JT: Where would you rate him in the pantheon of India's cricketing captains?

Dr Tharoor: I'd say Dhoni was undoubtedly in the very top bracket, partly because you know we've had only a handful of captains who've got any significant success record, and that too in relatively recent years. Most of our captains right up to the 90s had more failures than successes. Gavaskar had one great success as captain which was the world championship of cricket in Australia, Kapil dev had one great success which was the world cup in 1983. But otherwise all our captains till the 90's including Tendulkar who ended the 90s as captain had more failures than victories. It's really a handful of captains all in the 21st century who've seen a significant record of success and of that I would say Dhoni stands so far very near the top. Obviously, Kohli has begun with a higher percentage of success than either dhoni or Kumble or Ganguly or obviously any of their predecessors. But right now I would say Dhoni is at the very top if you look back at great Indian captains.

JT: He has retired from Tests and now given up the captaincy. The end of MS Dhoni as a cricketer is near. How badly will he be missed?

Dr Tharoor: Every great cricketer is missed for a very short time, then the game moves on. That is inevitable, that's simply how it is. Sport is a career which offers you a very short lifespan. If you want to be remembered for a long time become a politician, because as a cricketer you will be remembered fondly by people who saw you in your prime, but a younger generation will find new heroes. Many of us may worshiped Tendulkar, people called him god. But there are lots of people today who think of Kohli when they think of a great Indian batsman. Gavaskar seemed to be of a greatness and could never be equaled, then Tendulkar eclipsed him. Maybe Kohli will eclipse Tendulkar and as far as captaincy is concerned somebody will come along to eclipse Dhoni and may be one day Kohli.

Just today as we are speaking of this 17-year-old teenage prodigy, Prithvi Shaw, has hit a century for Mumbai and taken them into the Ranji trophy finals. It gladdens one's heart when a new star is born like this, a prodigy. But the fact is that somebody's gonna have to be displaced if one day as a bright young man he burst into the Indian team, it will be at the expense of somebody else who hasn't done badly. That's life. Karun Nayyar got his 303, how does Ajinkya Rahane come back in? There'll always be people of great accomplishment who will not be forgotten, but will have to make way for others. So Dhoni making way is simply the existing normal narrative of any cricketer's life and story.

Watch this video to hear Dr Tharoor describe the future of Indian cricket.

After Dhoni's unpredictable retirement as the Indian Cricket ODI and T20 captain, the responsibility of leading the team now goes on the able shoulders of Virat Kohli. WION's Jessica Taneja speaks to Congress MP and cricket enthusiast Shashi Tharoor (WION)