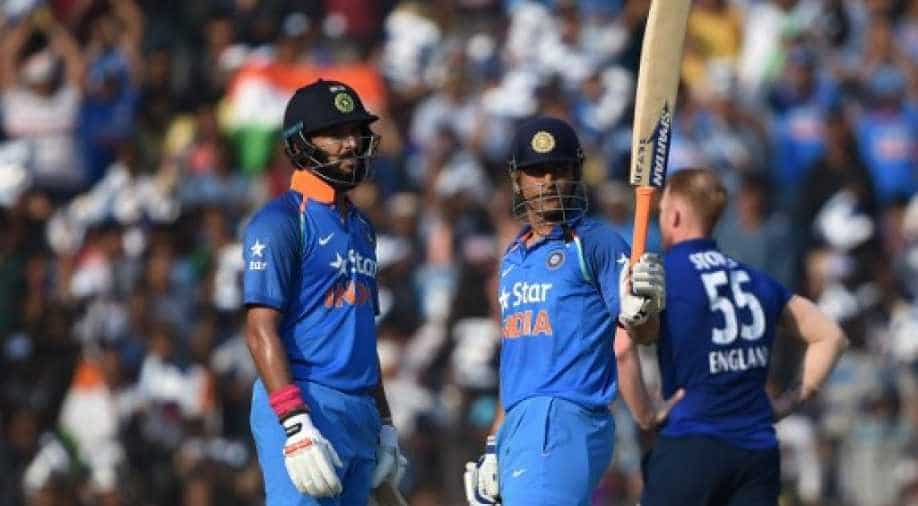 India's Mahindra Singh Dhoni (R) raises his bat after completing his half century as India's Yuvraj Singh (L) looks on in the second ODI. India's win means they have taken an unassailable lead in the series. Photograph:( AFP )

Veterans Yuvraj Singh and Mahendra Singh Dhoni revived memories of old by scoring blazing tons to rescue India from 25 for three to help post a whopping 381 in their stipulated 50 overs, only for England to give it a good go of it. But eventually, the visitors lost by 15 runs to lose the series in the second one-day international in Cuttack on Thursday.

England captain Eoin Morgan struck a valiant 102 as the visitors, who were chasing 382 for victory, gave the hosts a scare after they ended the reply on 366-8.

With England requiring 46 off the final three overs the visitors stood an outside chance but Morgan's unfortunate run out in the penultimate over ended their hopes.

The left-handed batsman hit 6 fours and 5 sixes during his 81-ball blitz.

But it was the 256-run fourth-wicket partnership between Yuvraj (150) and Dhoni (134) that handed India an unassailable 2-0 lead in the three-match series.

The day belonged to the 35-year-old Yuvraj, who made his highest ever ODI score, and former captain Dhoni as they delighted a sell-out crowd at Cuttack's Barabati Stadium.

The left-handed Yuvraj, who is making a comeback in the ODI side after a gap of three years, counter attacked after India were in early trouble at 25 for three.

I scored a century after a long time; I am happy that it happened today; hope to continue to maintain consistency: Yuvraj Singh #INDvENG pic.twitter.com/Oi4YmOVWVR

Yuvraj, who last scored a hundred against West Indies in the 2011 World Cup, recorded his 14th ODI century as he smacked 21 fours and 3 sixes in a 127-ball knock.

In the process, he overtook the great Sachin Tendulkar's record run tally in ODIs against England, and he has now accumulated 1,478 runs in 36 matches.

Dhoni had a relatively sedate start, seeing out two maidens before boosting his confidence with a couple of boundaries.

The wicketkeeper-batsman, who survived a dropped catch on 43, made the most of the reprieve to post his 10th ODI hundred as he hit 10 fours and 6 sixes.

Yuvraj was caught behind off Woakes while Dhoni fell to Liam Plunkett but their departure was scant consolation to the England bowlers who were all carted around the park.

In England's innings, Jason Roy (82) and Joe Root (54) put on 100 runs for the second wicket to try and set up the chase but the Indian spinners struck back to dent the opposition's hopes.

It was then that Morgan rose to the occasion with an exemplary showing as he put on 93 runs for the sixth wicket with Moeen Ali (55) to keep the chase alive.

But the pressure of keeping pace with the ever-increasing run rate finally got to the visiting side as Plunkett remained unbeaten on 27.

The third and final ODI is scheduled in Kolkata on Sunday ahead of the three-match Twenty20 series.

Yuvraj Singh later praised Indian skipper Virat Kohli for bestowing faith in him before expressing his happiness in regaining form at the international level. "I scored a century today, I am happy I scored today," the southpaw told reporters after the match.

Kohli said the series win would was a shot in the arm for his team ahead of the Champions Trophy, which is to be held in England in June, while his English counterpart cut a forlorn figure.