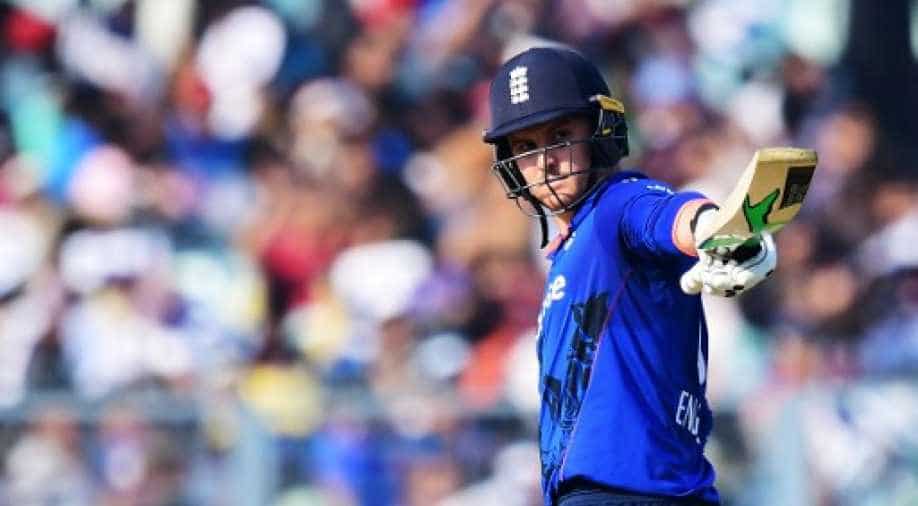 Jason Roy celebrates after scoring a half-century during the third One Day International match. Roy set the perfect launchpad for England to amass 321. Photograph:( AFP )

England beat India by five runs in the third one-day international at Eden Garden in Kolkata.

With the series already wrapped up by India, England were put in to bat first on an Eden Gardens wicket that was not very harsh on the pacers. The openers started off solidly with their opening partnership, setting up a solid platform of 98 runs for the big-hitters to chance their arms and put up yet another hefty total for India to chase.

The English were going on smoothly before the Indian spin duo of Ravindra Jadeja and Ravichandran Ashwin put the skids on the scoring rate. Paceman Hardik Pandya was taken for runs in his first spell but bowled tight in the end overs to bring India into the match again.

But the last five overs of the match swung the momentum in England's favour when Ben Stokes and Chris Woakes plundered crucial runs to set India a stiff target of 322.

Like the previous two matches, the Indian openers fell cheaply before skipper Virat Kohli and Yuvraj Singh threatened to take the match away from the English. But Stokes got Kohli nicked against the run of play and soon Yuvraj and Dhoni departed back to the hut to leave India reeling at 5-173. But a rearguard partnership between Pandya and Jadhav illuminated hopes of another Houdini act before some pressure bowling in the end by Jake Ball and Chris Woakes ensured England eked a slender win.

All-rounder Ben Stokes, who was adjudged the man of the match for his 57 runs off 39 balls and three for 63 with the ball, said: "It was difficult to start but Woakesy played a good hand. There's always dew here, it's tough for the bowlers to hit their straps. We've waited a long time to win on this tour."

Rookie Kedar Jadhav was adjudged the man of the series for his brilliant display with the bat, including the stunning 65-ball hundred to help India pull off an improbable victory in the first ODI of the series.