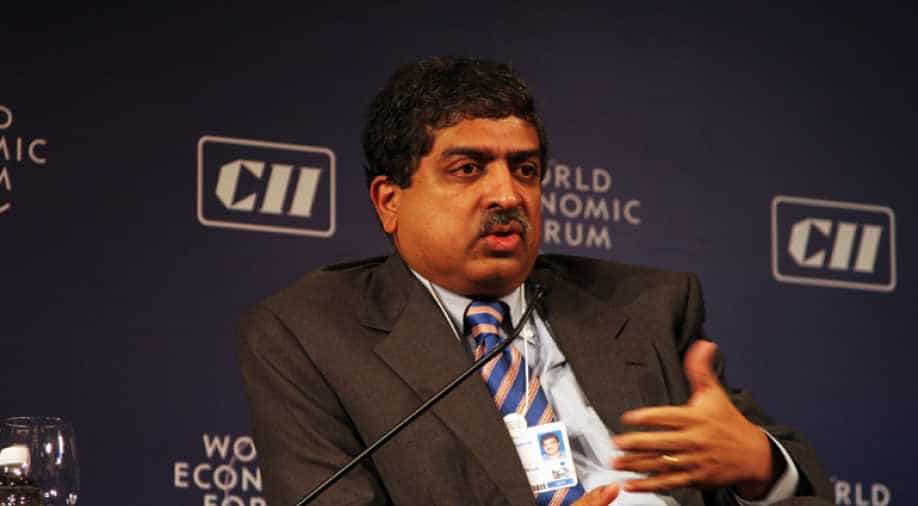 Nilekani said the issue has been blown out of proportion as Aadhaar have built far too many security layers and it is not possible to randomly pore it. Photograph:( Reuters )

Speaking to reporters on the sidelines of the 38th annual general meeting of Infosys, he said, 'So I'm very optimistic, things are going well.'

IT czar and chairman of tech giant Infosys Nandan Nilekani Saturday said the company was fully aligned with its growth strategy and that he was very optimistic of things going well.

"Absolutely, stability is not a question. I think a way beyond that. The company is fully aligned. Salil Parekh, CEO and MD of the firm, has come in and articulated a great strategy," he said.

"You can see that in numbers - the company is growing very well, people are very motivated," he said in response to a question whether stability was back at the company.

Speaking to reporters on the sidelines of the 38th annual general meeting of Infosys, he said, "So I'm very optimistic, things are going well."

Nilekani was appointed as the chairman to steer the tech giant in August 2017, after months of acrimony between founders and the then management led by R Seshasayee (chairman) and Vishal Sikka (CEO and MD).

The IT major held its 38th AGM Saturday that was attended by hundreds of shareholders from the city and different parts of the country.

Responding to a question related to Panaya and Skava businesses by shareholders, Parekh during the AGM said as stated in the financial report and results, Panaya and Skava were not being held as assets for sale.

He said, We are now looking at how we are going to re-focus and repurpose activities within those businesses that will help in the areas that we are now looking to grow the company in and that's the activity that is starting."

"We have assigned the senior members of the leadership team one each for Panay and Skava, who are spending a lot of time with addition to their roles trying to see how for example we can combine these in what we are doing in terms of retail or manufacturing segment," he said.

"We hope to have better results from this focus in short and medium-term," he added.

Infosys had earlier too indicated that it has dropped plans to sell Panaya and two other subsidiaries Skava and Kallidus after it failed to find any potential buyers.

In April last, Infosys had announced its plan to sell Panaya - the Israeli firm whose acquisition became a contentious issue between the founders and the erstwhile management led by Vishal Sikka - along with Kallidus and Skava.

It expected the sale to be completed by March 2019.

A whistle-blower report in 2017 had alleged wrongdoings by Infosys and some officials in the USD 200- million acquisition of Israeli automation technology firm Panaya by the Bengaluru-based IT services firm.

An internal audit committee set up by Infosys found no evidence supporting the whistle-blowers allegations.

However, Infosys founder N R Narayana Murthy had demanded that the full report by Gibson, Dunn and Crutcher on the whistleblower allegations be made public.

Later in October 2017, the Infosys board - under its new chairman Nandan Nilekani -- gave a clean chit to the controversial Panaya acquisition, saying there was no merit in the allegations of wrongdoing.

Earlier in his address to the AGM, Nilekani said Infosys was embracing the Live Enterprise vision and continuously changing to prepare for the new world.

"In fact, in the past year, we have done much to progress on this path. We've been working relentlessly to rebuild our 2,00,000-plus people organisation to operate with the speed and flexibility of a start-up, he said.

"Guided by the strategy articulated by Salil Parekh, we focussed on increasing our relevance to clients and building greater business model resilience, Nilekani said, On behalf of the board, I want to assure you all that we will do everything we can to build on the advantages and harness the vitality of this high-energy management team that is inspiring thousands of charged Infoscions to move forward and take the world with them.

"Our aspirations are ambitious and execution plans bold. Our motivation and commitment to take it forward is founded on the generous guidance and support of our partners, clients, co-founders and governments of the several countries and states that we operate in, he added.