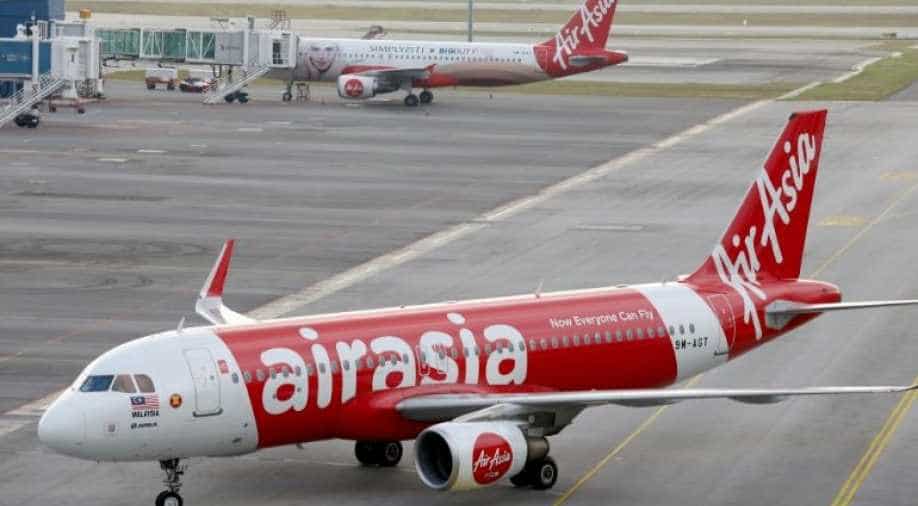 AirAsia Airbus A320-200 planes are seen on the tarmac of Kuala Lumpur International Airport 2 (KLIA2) in Sepang, Malaysia Photograph:( Reuters )

Tata Sons will likely tie up with other financial investors to acquire AirAsia's 49 per cent stake in the venture.

Indian conglomerate Tata Sons is in talks to buy out AirAsia Group Bhd's stake in their airline joint venture in India at a steep discount, according to a report.

Tata Sons will likely tie up with other financial investors to acquire AirAsia's 49 per cent stake in the venture.

The Tatas own 51 per cent in the airline and have the right of first refusal in acquiring shares of its partner.

Malaysian budget carrier AirAsia had said earlier in the day that it was in talks to raise more than 1 billion ringgit ($234.52 million) in funds, a day after its auditor cast doubt on its ability to continue as a going concern.

The losses from the pandemic have left no cash in the coffers and it is seeking a fund of over 500 million dollars.

AirAsia reported a loss of  $187 billion in the first quarter, the biggest loss since listing on stock exchanges in 2004.

There are plans to cut the workforce by 30 per cent and the remaining employees may have to take a pay cut of up to 75 per cent. AirAsia is unable to pay suppliers and lenders as well.

It has refused all deliveries of airbus jets this year. The pandemic has only hastened a development that was a long time coming...

The Tatas flew India's first airline in 1938. However, they lost it to nationalisation after independence. Now, 80 years later, the Tatas could have their own airline in India.

The Tata group has had a difficult partnership with Air Asia which began operations in 2013. But, a few years later, Air Asia's CEO Tony Fernandes was pulled up for money laundering in India.

The Central Bureau of Investigation began to probe the airline. Investigating agencies said the company used corrupt means to acquire a license for international operations.

Soon top Air Asia executives were replaced by trusted Tata group veterans. Acquiring the AirAsia stake can be beneficial in another way.

If the deal goes through, the Tatas will be bidding for Air India, India's national carrier. The government is looking to sell 100 per cent stake as part of the plan to limit its role in many state-run companies.

A non-compete clause restricted both Tatas and AirAsia from investing in a rival airline.

However, this hurdle has been removed as the Tata group is the sole contender to take over Air India. It is the same airline that was founded by JRD Tata in 1938. That year Tata airlines carried its first passengers from Bombay to Trivandrum in a six-seater aircraft.

The Tata group also owns 51 per cent in Vistara airlines which is a joint venture with the Singapore airlines.

So, the Tatas have three routes to take to the air independently. The crucial question is that of timing if it concerns acquiring other airlines it is the perfect time most airlines are in deep trouble due to the pandemic.

Although AirAsia is going off the runway but is it the right time to enter the aviation market with an airline of one's own company.