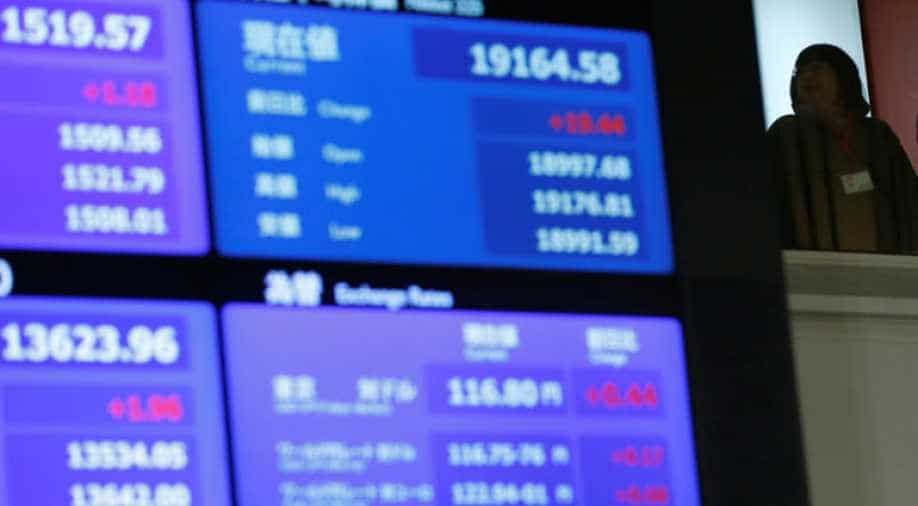 Spanish bank Santander was among the big gainers in Europe, its 4 per cent rise in 2016 net profit giving its share price a similar boost and leading the continent-wide rally in bank stocks.

Japan's Nikkei advanced 1.4 per cent, buoyed by data showing the country's exports rose for the first time in 15 months in December, a positive sign for the economy even as talk of US protectionism looms over the outlook.

US futures pointed to a higher open on Wall Street. On Tuesday the S&P 500 and Nasdaq both rose to fresh record highs and the Dow Jones Industrials came within 51 points of the elusive 20,000 mark.

"US stocks have shown renewed signs of life this week, as the market toyed with the idea of reigniting the 'Trump rally' that we saw in the aftermath of the presidential election," said Kathleen Brooks, research director at City Index.

He also met chief executives of the Big Three US automakers to push for more cars to be built in the United States.

"Wednesday's key theme is the return of the 'Trump trade'," Brooks said.

The dollar snapped its recent losing streak and Treasury yields firmed overnight as Trump shifted his focus back to growth initiatives including promising corporate tax breaks to fuel US investment, after focusing on protectionism in his first few days in office.

While the greenback moved in tandem with the snap back in US Treasury yields overnight, it struggled to make much headway in Asian and European trading.

Lingering concerns about growing protectionism from the Trump administration and the potential negative effects on global trade and growth remained close to the surface.

"It has kept dollar/yen flat despite the S&P 500 hitting new highs and Treasury yields edging up," Kit Juckes, head of FX research at Societe Generale in London, wrote in a note on Wednesday.

"There's no doubt that a major bout of protectionism-induced risk aversion would be yen-supportive, as well as negative for a bunch of currencies that depend on US trade," he said.

The dollar slipped 0.1 per cent to 113.65 Yen, and 0.1 per cent against a basket of currencies. The Euro was unchanged at $1.0725, little moved by a surprise fall in German business morale this month.

Germany's 10-year Bund yield rose to a six-week high of 0.38 per cent and France's benchmark 10-year yield hit a one-year high of 0.95 per cent, with bond prices weighed down by the rally in stocks and new debt supply.

Sterling was steady at $1.2524 after Britain's Supreme Court ruled that the government would need approval from parliament before formally triggering the country's departure from the European Union.

The decision overall was seen as clearing the way for Prime Minister Theresa May to get on with launching Brexit talks. Sterling has bounced 4 per cent over the last week.

Oil prices gave back much of their overnight gains. Brent futures dipped 0.5 per cent to $55.13 per barrel, after rising 0.4 per cent overnight.

Renewed optimism over Trump's growth policies took the wind out of a recent rally in safe-haven gold, which fell 0.6 per cent to $1,201 per ounce.