Dollar spooked in Asia as US polls too close to call 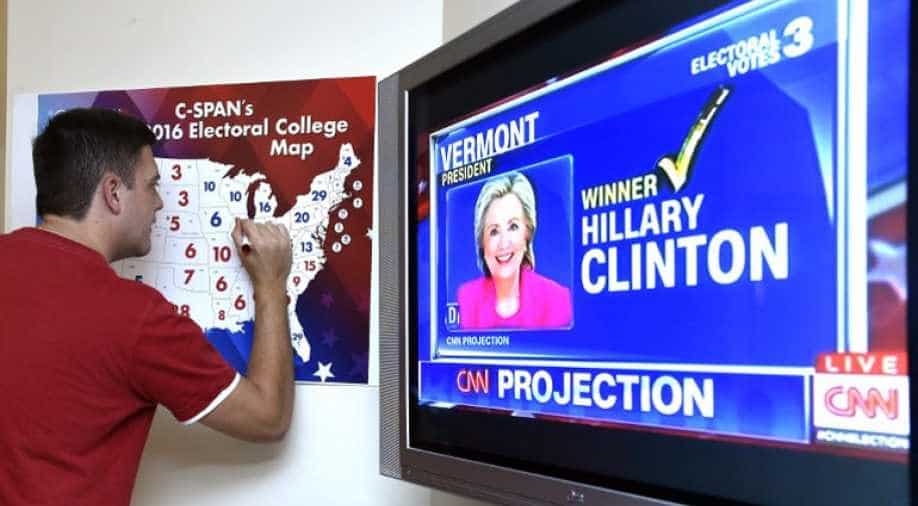 Markets have tended to favour Clinton as a status quo candidate who would be considered a safe pair of hands at home on the world stage. Photograph:( AFP )

Asian markets were on tenterhooks on Wednesday as early state exit polls in the US presidential election showed wins for both candidates and no clear trend as yet, causing a nervous shift back to safe haven assets.

Asian stocks and US stock futures edged 0.5 per cent higher in volatile trade, while the Dollar slipped on the Yen and Euro as investors hedged against the risk of a shock win by Republican Donald Trump.

Both Trump and Democrat Hillary Clinton scored early victories in their bitter race, with Trump winning as expected in conservative Indiana, Kentucky and West Virginia and Clinton capturing liberal Vermont.

The victories in the four states were long predicted and not especially significant in a national race where opinion polls show Clinton has an edge.

Markets have tended to favour Clinton as a status quo candidate who would be considered a safe pair of hands at home on the world stage.

"In contrast, a Trump victory would trigger massive uncertainty that would likely undermine risk assets at least initially, which in turn could preclude a Fed rate hike this year," warned Michelle Girard, chief US economist at RBS.

Much of the action was in the currency markets where the Mexican peso has become a touchstone for sentiment on the election as Trump's trade policies are seen as damaging to its export-heavy economy.

The dollar jumped 1.2 per cent on the peso as the early results were reported, after hitting its lowest in two months overnight.

In share markets, MSCI's broadest index of Asia-Pacific stocks outside Japan was still up 0.4 per cent, but the Nikkei rose 0.8 per cent.

Shane Oliver, head of investment strategy at fund manager AMP Capital, said the most positive outcome for US equities would be a Clinton win with a split Congress.

"Historically, since 1927 US total share returns have been strongest at an average 16.7 per cent per year when there has been a Democrat president and Republican control of the House, the Senate or both."

The return only averaged 8.9 per cent when the Republicans controlled the presidency and Congress.

Oil took a knock from data showing a surprisingly large rise in crude stocks. US crude eased 19 cents to $44.79, while Brent was untraded early in the Asian day.