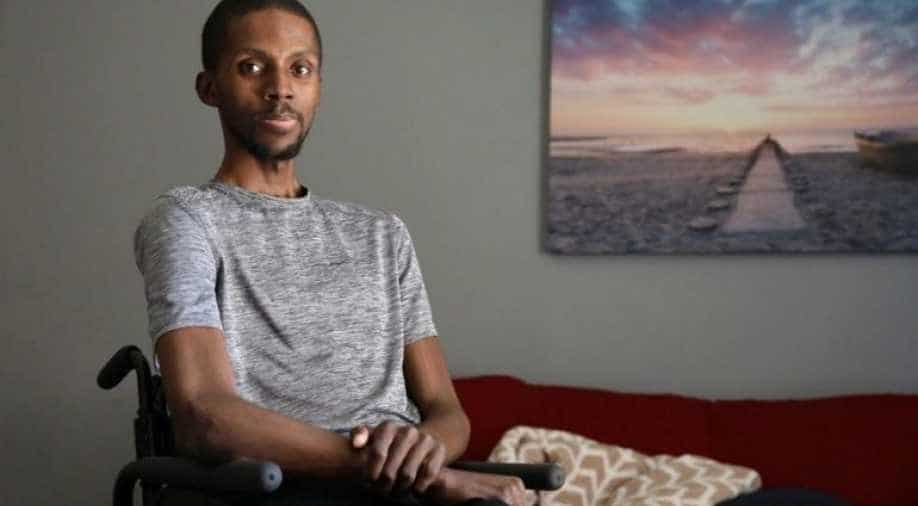 T'angelo Magee poses in his wheel chair at his apartment in Hackensack, New Jersey, US. Photograph:( Reuters )

Americans with disabilities in recent months have been joining the workforce at a faster pace than those without disabilities, according to data collected by organizations that work with the disabled.

Megan Helsel, a kayaking wildlife specialist, has her dream job, and T'angelo Magee is making headway toward his, a commercial pilot.

Both say work is central to their identity. Both are disabled.

Americans with disabilities, physical and cognitive, in recent months have been joining the workforce at a faster pace than those without disabilities, according to data collected by organizations that work with the disabled.

Labor Day on September 2 may be the first time the disabled regain an employment rate that was upended by the 2008 Great Recession.

The gains are the result of both technological advances and workplace flexibility that lessens commuting barriers, according to experts on disabled workers.

But the gains also reflect the pull of a tight labour market.

With the US unemployment rate at just 3.7 per cent - roughly a half-century low - employers have increasingly considered job applicants they often overlooked in the first stages of what is now a record-long economic expansion.

"The recent uptick is basically 'the full employment story' - it makes firms look at other populations they haven't previously considered," said Andrew Houtenville, economics associate professor at the University of New Hampshire.

Helsel was working in her kayak on bird counts and other wildlife projects for the US Department of Agriculture in New Jersey in 2016 when a previously undetected tumour burst in her spine, leaving her paralyzed from the waist down.

When her doctor broke the news about her sudden life-altering disability, Helsel's first question concerned returning to work.

"He said, 'You're probably never going to walk again.' I asked, 'When am I going to be able to kayak again?'" recalled Helsel, 32.

New technology has helped Helsel and other disabled people to get on an employer's payroll.

More specialized breakthroughs include an electronic-stimulating leg cuff Helsel wears instead of a bulkier brace that restricts her to wearing sneakers.

The cuff enables her to don thermal boots needed to kayak through frigid winter waters.

Helsel is among the roughly 15 million disabled Americans ages 16 to 64, which represents about 7 per cent of all working-age Americans, according to the Bureau of Labor Statistics' Current Population Survey for July.

Labour force participation for working-age disabled Americans increased 6.5 per cent in July from a year earlier, compared to a 0.3 per cent increase for working-age Americans without disabilities, according to national Trends in Disability Employment (nTIDE), a monthly report issued by the Kessler Foundation, a non-profit organization, and the University of New Hampshire's Institute on Disability.

It is part of a two-year strengthening of the job market for disabled Americans, a rebound from the 2008 recession, which obliterated jobs for disabled workers at a faster rate than for those without disabilities, said John O'Neill, director of employment and disability research at Kessler Foundation.

While workers without disabilities also suffered job losses, they regained pre-recession employment rates by June 2017 and, maintaining momentum, their job numbers are higher than ever.

Disabled workers have yet to reach that recovery milestone, although experts say it is now in sight.

Slow and steady growth started in 2015 and boosted employment to 31.2 per cent last month, according to the most recent nTIDE report.

Less clear, however, is whether that hard-won recovery can last through what some economists say is an impending recession.

Magee, a heavy equipment operator who was paralyzed from the chest down in a motorcycle accident, has gone on 26 job interviews in the past six months for such positions as an office administrator for a building complex and front desk receptionist for a law firm.

"On the resume and phone interviews, it’s like I’m the perfect candidate. Then when I get there and they see I’m in the wheelchair, everything changes," said Magee, 32, who ended up starting his own mobile notary business in Hackensack, New Jersey.

His career goal is to pilot small aircraft for commercial US travellers.

The US Army veteran who is married with a 3-year-old daughter this year was trained in an aircraft with adaptive controls.

He was among 10 students selected out of 27,000 applicants for the Able Flight program.

Now he is searching for similar training to earn his commercial license.

"In my wheelchair, I do a lot more than the average man on the street," Magee said. "I'm definitely going to do it."