Cars from the land of Red Dragon ready for India 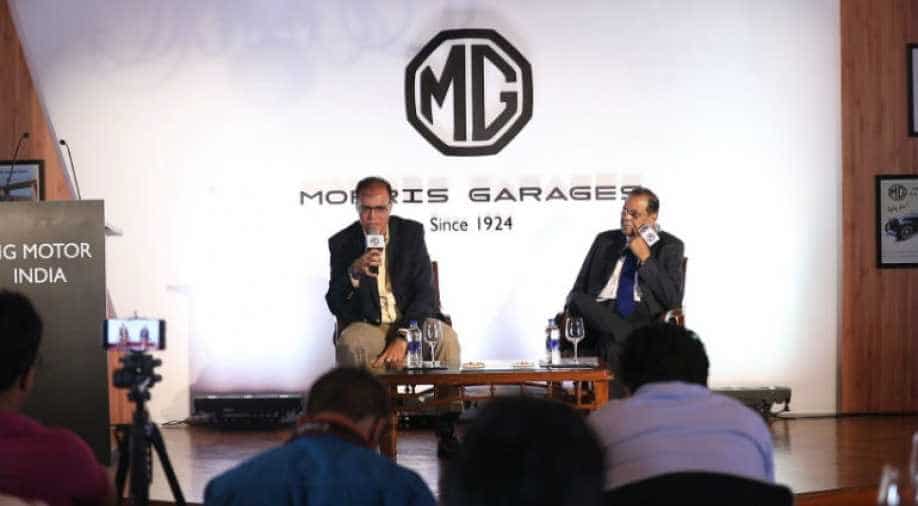 India is a tough market to crack. This is mainly due to the fact that India is still a very value-conscious market.

March 19, 2018. MG Motor, a 93-year-old British brand that kick-started as an out-and-out racing sportscar brand, announced their launch in India. With an intriguing plan of investing about Rs 5000 crore in India, and a well-constructed blueprint of their future operations for India, MG Motor caught the attention of automotive and business fraternity in the country.

As much as this news excited the enthusiasts, some critics and big industry players felt hesitant & iffy of MG's plan. Afterall, MG Motor might be a British brand, but it is owned by a Chinese company. And, the last time a Chinese car company did business in India, it did not end well for the company.

WION breaks down the strategy and the product offensive of MG Motor India. But to understand this let's take a minute and look at something that happened a year ago.

THE FAILURE OF GENERAL MOTOR IN INDIA

Lack of strong products and a failure to update and market their cars, meant American carmaker General Motors (GM) quit India after 22 years of doing business in the country. Just before GM was slowly fading into oblivion, the American carmaker took some frugal steps to revive the brand. Other than joining hands with multiple brands like Hindustan Motors & Daewoo, GM's one last shot at reclaiming its lost glory was led by its Chinese partner SAIC. The partnership with the Chinese failed miserably, and the debacle of SAIL sedan proved to be the final nail in the coffin for GM.

A famous Mandarin proverb reads 'The temptation to quit is the greatest just before you are about to succeed'. Staying true to the proverbial idea, the Chinese company decided to re-enter the Indian market. This time, with MG Motor - the British brand they acquired a decade ago.

Having already burnt their fingers experimenting in the Indian marketplace, SAIC is now ready to fight fire with fire. To make most of the brand history & cult-following MG enjoys in India, SAIC is now targeting the premium-car space. They've already acquired the now-defunct General Motor's plant in Gujarat's Halol, and revamped it to manufacture cars in India, for India. However, most of the MG cars for global markets are still produced in China.

MG cars are produced in four manufacturing bases across China. WION spent a day at MG's Lingang facility, about 50km from China's business capital Shanghai. The facility, built with an investment of four billion yuan, is responsible for the production of SIAC's two important brands from its line-up - MG Motor & Roewe.

MG and Roewe are both interchangeable brands of SAIC Motor Corporation. Post the tremendous success of Roewe cars in the mainstream Chinese automotive market, SAIC now aims to share its technologies with the MG brand. What's exciting for the Indian drivers is that SAIC is thinking of bringing these technologies to India with the MG brand.

The Lingang manufacturing plant is almost completely automated with three lines producing most of the cars. The facility, which is capable of churning out an impressive 40 cars per hour, houses a paint shop and engine assembly plant. One aspect of the factory that caught our fancy, and we think should be carried over to MG's Halol facility, is that the assembly area was tuned to produce both Internal Combustion Engined-vehicles and electric cars on the same lines.

GETTING A TASTE OF MG CARS

It all looked good at first sight - the cars, the design centre and the production unit. But they say looks can be deceptive. So, we decided to give the cars a good thrashing to decipher their abilities at Guangde proving ground, the largest such ground in the ASEAN region, in Guangde County in Anhui, China.

Even though we were pressed for time, all the cars were put through tailor-made courses to test different driving credentials. We started off by driving the Blue Marvel from the Land of the Red Dragon.

Beautiful lines and clear details, topped off by a giant shiny grille, the Marvel X is probably the best-looking car out of the MG line-up. Offering generous amounts of space on the inside, with good quality leather and a 12.3-inch touchscreen infotainment system developed by Alibaba, the Marvel X ticks all the boxes on paper.

Off paper, and on the course, the driving dynamics of Marvel X truly stand out. A 52.5 kWh battery helps the car to go from 0 to 100 km/hr in just 4.8 seconds with power being distributed to all the wheels. Essentially a mid-size SUV that offers a stunning 500km on a single charge, the Marvel X came out as an all-round winner on a patch used to test the ride-quality of the car.

The MG HS, on the other hand, is a full-blown SUV, and it comes across as an ideal car for MG's first car in India. The Hyundai Creta rival not only looks premium on the outside, it reeks of luxury on the inside. Electrically-adjustable front seats, dual zone climate control, adaptive cruise control and the liberal use of high-quality plastics are some of the elements you'll truly appreciate. Most importantly though, the entire MG HS range received a commendable five-star rating in the Chinese NCAP crash tests.

At the heart of the MG HS is a 2.0-litre turbocharged petrol engine that produces 231 PS of power and 360 Nm of torque, and is mated to a 6-speed automatic transmission. To check out the electronics that's available in the electric car, the MG HS was put through a simulated rain and snow track. Even at full throttle on the super-slippery surface, the MG HS was mighty skillful - thanks to ABS and traction control system. The course highlighted the practicality of the safety system that would come handy if the going got tough.

The first in-house developed internet-enabled car by SAIC is the Roewe ERX5. A rather monotonous skin on the outside, is perfectly contrasted by the 11.8 kWh Ternary battery pack under the skin.

The ride quality on offer was pretty impressive for a SUV. The ERX 5.0 was driven over a path that consisted of rough patches, and bumps. Even though it was not the best car we drove at Guangde Proving Grounds, the ERX 5.0 stands out because it is SAIC's first in-house developed internet connected car. Basically, this means that if you happen to pass through a toll gate, the car lets you do the payment. Similarly, at any restaurant's drive-through you can pick up your food and make the payment through your car. It also syncs your calender, e-mail, maps and gives you a notification of upcoming events, and flights. If at all MG get any of these technologies to India, an internet-connected car could truly be a game-changer in the Indian market which is undergoing a rapid digital transformation.

The last car we drove was the e6, a fastback hybrid sedan from the MG stables. Part of the standard equipment on the eMG6 are the electronic parking brake, and remote-control driving system, which allows drivers to control the car at low speeds via a mobile application.

A complicated slalom test course and lane-changing sections, set up entirely with cones, brought out the true road-holding potential of the car at high-speeds. With power figures of 228 PS and 622 Nm, the car had absolutely no problem getting off the line. The eMG6 left us with a wide smile on our faces, as the sedan always seemed game for more, with an abundance reserve power available on tap.

CHALLENGES THAT LIE AHEAD

After getting a taste of MG's engineering prowess, we believe SAIC has genuinely capable products in its arsenal. However, the Indian market is not only about products. To get a sense of the strategy and the formula for Indian market, we spoke to Chaba, the man who calls the shots at MG Motor.

WION: What exactly is MG Motor's game plan for the Indian market?

Rajeev Chaba: We are launching our first car in Q2 of 2019. It is going to be a C-segment SUV, which is a large size SUV for our country. Overall, if I can say in one word, it will be that we will try to succeed the consumer expectations in whichever areas we touch. Hopefully, we are able to execute it.

WION: What's more interesting is that you have a strong electric car portfolio, and a specific electric car planned for India. Could you throw some light on the electric mobility plans you have for India?

Rajeev Chaba: SAIC has invested a lot in future technologies, EV and connected systems. So we are trying to get this EV to India at this point of time when the government is showing us the vision, the direction and an intention to introduce electric policies and infrastructure. We are going to launch an electric car as our second car in India. Right now, we are talking to the government about charging infrastructure and policies, so based on that it will depend how much of localisation will be done to the car. But it is not going to be an imported car, the electric car will be manufactured in our Halol facility in Vadodara.

WION: Is there a possibility of developing a shared platform between MG Motor, Volkswagen & General Motors?

WION: How nervous are you about venturing into the Indian market, this time with a new brand?

Rajeev Chaba: I think the joke in the international auto circle is that if you're successful in India, you can be successful anywhere. This is because, in India we have an unique demand structure, and we have to be relevant. See, consumers are willing to pay if the products are relevant and meaningful for them. So, frankly if you ask me, I'm nervous, I'm not over-confident, I know the challenges, our team knows the challenges, but that keeps us on our toes to make sure that we are able to walk the talk. We are going to do our best, and we are very cautious.

Only when you drive cars like these, and explore car markets like China, do you realise how far India as a car country is. Tier-4 cities in China have charging stations for electric cars. You also understand the kind of potential manufacturers like MG Motor have to dynamically impact the marketplace and do something revolutionary.

Having said that, India is a tough market to crack. Several brands that have done business in India (some of them even quit Indian market) have found India to be a challenging market do to business in. This is mainly due to the fact that India is still a very value-conscious market.

MG Motor has some of the brightest minds working for them, like designers and engineers who develop exciting products for them. They do have the resources and a strong R&D wing to build interesting cars. But more than all this, what will be vital for MG is to provide a quality overall experience to the Indian buyer, and introduce cars that are value-for-money irrespective of the segment and the pricing.