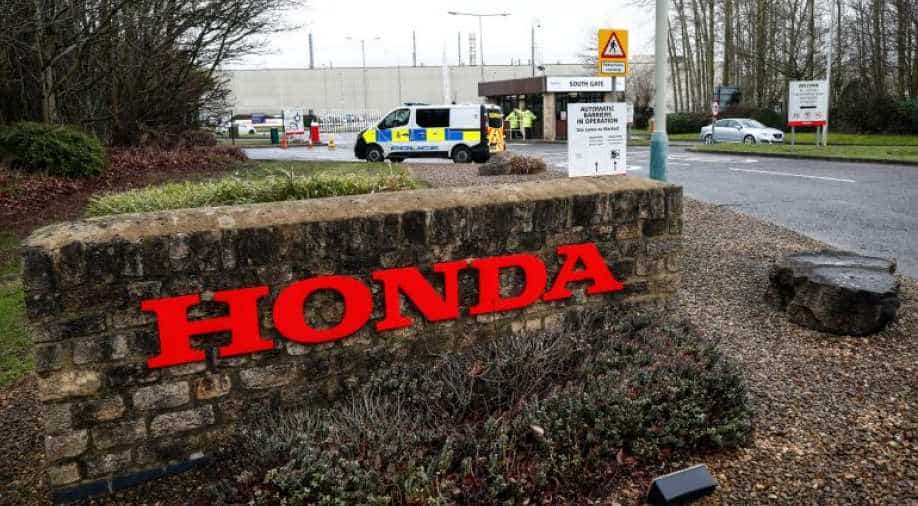 General view of the entrance to the Honda car plant in Swindon, Britain, February 18, 2019. Photograph:( Reuters )

On Tuesday, Honda was the latest Japanese firm to send shockwaves through British industry by announcing the end of its plant in Swindon, where around 3,500 workers have been producing the 'Civic' for more than 24 years.

Panasonic, Sony, Nissan and now Honda: a recent exodus of Japanese firms from Britain is not solely down to Brexit, analysts say, but it has in many cases accelerated the decision to leave.

On Tuesday, Honda was the latest Japanese firm to send shockwaves through British industry by announcing the end of its plant in Swindon, where around 3,500 workers have been producing the "Civic" for more than 24 years.

Officials rushed to divert blame from Brexit, with local MP Justin Tomlinson saying the decision was down to "global trends" and pointing out that Honda was transferring all European production back to Japan.

But while there are specific reasons behind each individual business decision, analysts said the spectre of Brexit was haunting Japanese firms across the board.

"Honda seems to have been preparing for this for a long time. Then Brexit happened, which might have pushed the company to make the decision now," said Seiji Sugiura, an analyst at Tokai Tokyo Research Institute.

Both Sugiura and Satoru Takada, an auto analyst at TIW research firm based in Tokyo, noted that Honda had been debating what to do with the Swindon plant for some time.

"It has struggled in recent years. Then came Brexit," said Takada.

"The change in the business environment pushed the company to make the decision now," he added.

Honda's decision came hot on the heels of Nissan axing production at its Sunderland plant in northeastern England.

There are around 1,000 Japanese companies operating in Britain, supporting some 140,000 jobs.

And while firms from Japan are not the only ones pulling out from Britain, a long history of Japanese investment in the country stemming from Japan Inc's boom days in the late 80s makes the exodus all the more painful.

"I think Swindon's finished without Honda," said Sue Davis, a local resident. "My ex-husband works there, has done for 20 years."

Sugiura said Japanese carmakers were attracted by a business-friendly environment under Conservative leader Margaret Thatcher in the 1980s as well as by Britain's access to European markets.

"Originally they decided to go to Britain, rather than the continent, because it offered the merit of an integrated EU. Now, things are the exact opposite," the analyst told AFP.

When it comes to the automakers, rapid changes in the car industry and the global trade environment are also factors in paring back operations, the analysts said.

A huge EU-Japan free trade agreement that came into effect this month also reduces the incentive for Japanese firms to operate in Europe by phasing out tariffs.

Takada also pointed out that Japanese firms have generally struggled in Europe where they are competing on the home turf of German giants like Volkswagen.

But it is not just carmakers deciding to scale back their presence. Electronics giants Sony and Panasonic have also announced shifts from Britain.

Major Japanese banks are pulling out of London and nuclear firm Hitachi last month announced a freeze in a major power plant in Wales.

Many of these firms said Brexit wasn't the only factor in their decision but it played a part.

"What are the reasons for this pullout? One of them is distrust in Britain itself -- its economy, politics and society are in disarray," said Yosuku Tsuchida, a researcher at Mitsubishi UFJ Research and Consulting.

Tsuchida predicted that other firms using Britain as a base for continental Europe would consider pulling out.

Japanese Prime Minister Shinzo Abe has pleaded for clarity for Japanese firms and said "the whole world" is hoping that a no-deal Brexit can be avoided.

Analyst Sugiura from Tokai Tokyo said the future for investment into Britain was far from bright.

"The lack of clarity in Brexit is discouraging businesses from making a fresh investment. Investing in the UK doesn't seem attractive anymore now."

"One has to question if Britain is now a suitable location to have a production hub," said Takada.