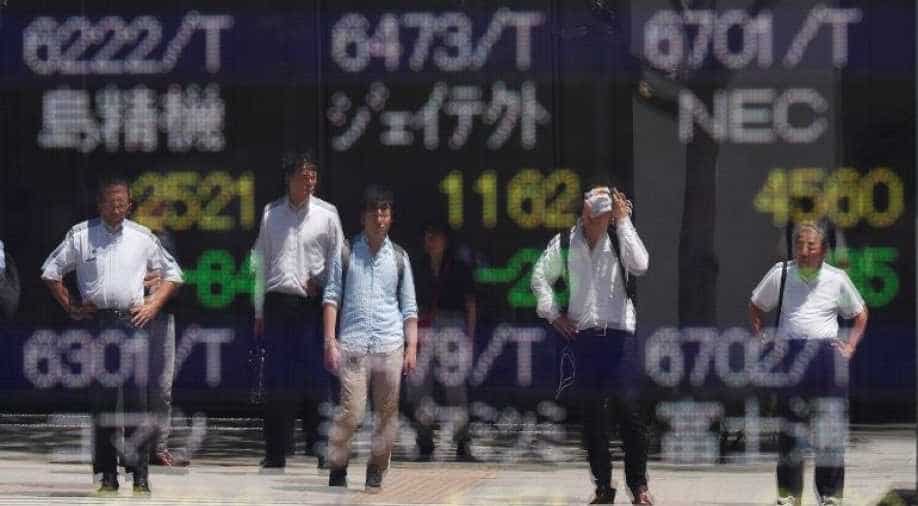 The improvement in investors' appetite for risk reduced demand for safe havens such as government bonds and the yen, however.

Asian stocks gained on Friday, joining a global trend as investors took heart from firm US economic data plans hopes a meeting between US and Chinese negotiators next month signals an easing in trade tensions.

The improvement in investors' appetite for risk reduced demand for safe havens such as government bonds and the yen, however.

MSCI's broadest index of Asia-Pacific shares outside Japan added 0.4 per cent, putting it on track for a 2.2 per cent weekly gain - which would make it the best week since mid-June.

The Shanghai Composite Index edged up 0.1 per cent. Hong Kong's Hang Seng was up 0.2 per cent, with some earlier gains trimmed after rating agency Fitch downgraded the city's credit rating following months of unrest.

US private payrolls increased in August at their fastest pace in four months, according to ADP National Employment Report. Separately the US services industry rebounded last month to its fastest expansion since February, according to the Institute for Supply Management's non-manufacturing purchasing managers index (PMI).

"The strong US data are the main part of the latest turn in markets as they are key factors impacting equities and US yields, therefore determining how long this 'risk on' phase will last," said Junichi Ishikawa, senior FX strategist at IG Securities in Tokyo.

Ishikawa at IG Securities said a US August jobs report ou later in the global day "will get more attention than usual as it could further fuel the risk-on phase, which in turn would boost the dollar."

The non-farm payroll report is expected to show an increase of 158,000 and the unemployment rate holding steady at 3.7 per cent.

The dollar stood at 107.000 yen after climbing to a one-month high of 107.235 overnight. The greenback has gained about 0.7 per cent against the safe-haven yen.

The pound hovered near a six-week peak of $1.2353 scaled the previous day on hopes that Britain could avoid exiting the European Union without a deal.

Sterling had fallen to a three-year low of $1.1959 midweek after British Prime Minister Boris Johnson stoked fears of a no-deal Brexit.

The euro was steady at $1.1039 after rising 0.5 per cent overnight, when it was lifted by sterling's bounce.

The dollar index against a basket of six major currencies was little changed at 98.369 after pulling back from a one-week low of 98.085 the previous day, thanks to a rise in US Treasury yields.

US Treasuries fell in price and their yields rebounded from multi-year lows as investors moved out of safety assets into equities.

The 10-year Treasury yield was at 1.536 per cent, having risen from a three-year trough of 1.428 per cent plumbed midweek as soft economic data and Sino-US trade worries stoked global recession concerns.

"The recent panic in markets was excessive. And if a sustained reversal of fragile sentiment gets under way, US equities will test fresh record highs and a corresponding drop in bond prices will present an good bargain hunting opportunity," said Eiichiro Tani, chief strategist at Daiwa Securities.

Japan's 10-year government bond yield climbed 2.5 basis points to minus 0.250 per cent, putting some distance between a three-year low of minus 0.295% set earlier this week.

The Australian dollar traded close to a one-month peak of $0.6830. It has gained more than 1 per cent this week amid the thaw in US-China trade tensions and tempered prospects for an immediate interest rate cut by the Reserve Bank of Australia.

Brent crude oil futures were little changed at $60.97 per barrel, losing some steam after posting strong gains over the past two sessions.

Brent had climbed to a one-month peak of $62.40 per barrel on Thursday on a decline in US crude inventories and eased trade war worries.