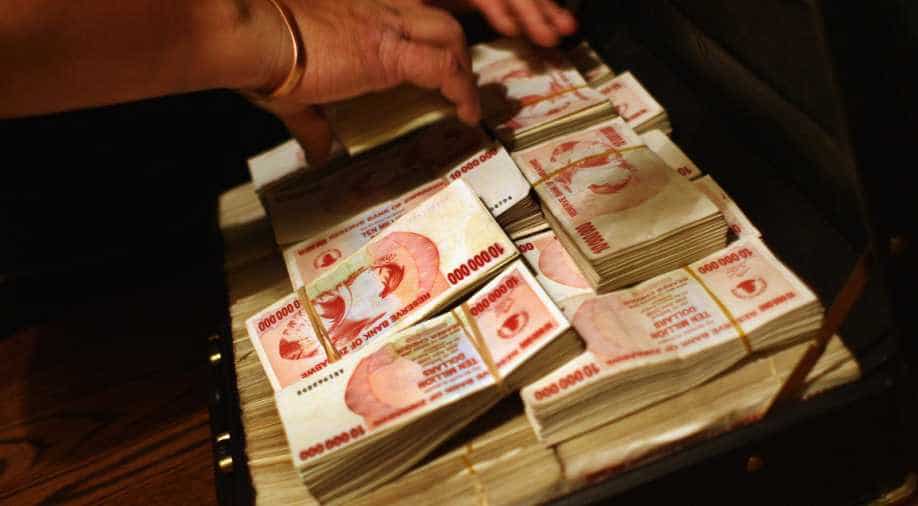 The crisis-hit country has used multiple foreign currencies since 2009 after a rate of inflation that peaked at 500 billion per cent rendered the Zimbabwe dollar unusable.(In photo) A man counts Zimbabwean dollars in Bulawayo. Photograph:( Getty )

Zimbabwe on Monday starts issuing "bond notes", its own currency equivalent to the US dollar in a bid to ease critical cash shortages amid widespread fears of a return to hyperinflation.

The crisis-hit southern African country has used multiple foreign currencies, including the greenback since 2009 after a rate of inflation that peaked at 500 billion per cent rendered the Zimbabwe dollar unusable. The introduction of $2 and $5 bond notes into circulation follows the issuing of bond coins over a year ago to ease shortages of change in smaller denominations.

The country has experienced a severe shortage of US dollar banknotes in recent months which forced President Robert Mugabe's government to print what locals have dubbed "surrogate money".

"Citizens are generally opposed to the introduction of bond notes because they are still smarting from the death of the Zimbabwe dollar, which was abandoned in 2009 due to hyperinflation," said an editorial in the weekly independent newspaper The Standard. "The government has been arrogant, dismissing those opposed to the surrogate money as unpatriotic. As we have warned the government before, a currency can only be sustained through confidence it inspires on the market."

The central bank has launched a media advertising blitz trying to allay people's fears, saying retailers and businesses have agreed to accept the bond notes. The introduction of bond notes stoked fears of gas shortages over the past week and queues surfaced at some fuel stations. The government sought to calm panicking drivers, saying the country has enough fuel stocks.

"We wish to assure the nation that there is no basis for alleging that the country will go dry in terms of fuel supply," it said in a statement at the weekend.

Depositors will be limited to a maximum withdrawal of $150 a week. The 2009 switch to foreign currencies saw relative economic stability before the economy began to falter again as government policies deterred investors.

The economic decline has worsened in recent months with banks running short of cash, forcing desperate depositors to sleep overnight outside branches to be sure of accessing their money.

Those businesses that have weathered Zimbabwe's successive economic storms are grinding to a halt as the government repeatedly fails to pay soldiers and civil servants on time. The introduction of bond notes has also stirred anger that has erupted into street protests.

In the past fortnight several activists were beaten up and arrested ahead of a planned street protest to oppose the introduction of the notes. The government said the new notes will be backed by a $200 million support facility provided by the Cairo-based Afreximbank (Africa Export-Import Bank).