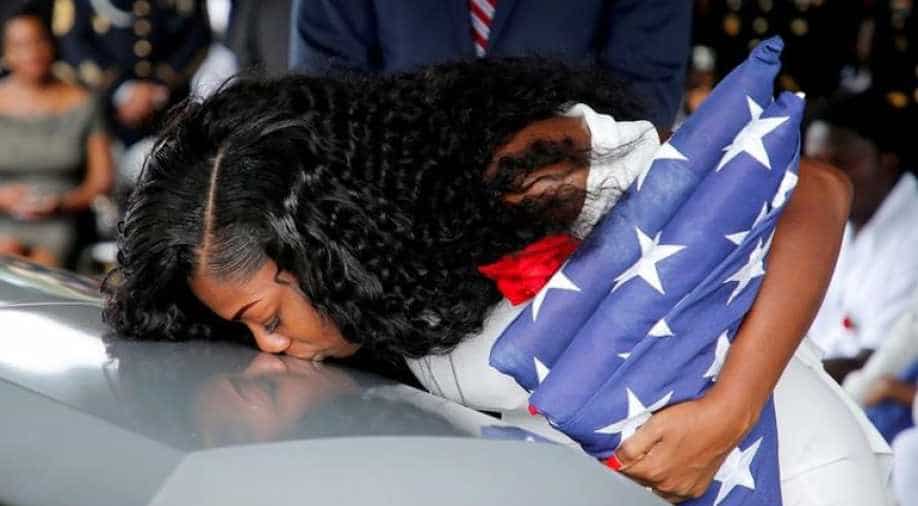 The widow of a US Army sergeant killed in Niger this month said on Monday that President Donald Trump "made me cry even worse" in a condolence telephone call when he said that her husband "knew what he signed up for."

In an interview with ABC's "Good Morning America," Myeshia Johnson, widow of Sergeant La David T Johnson, also said she has been told little about how her husband was killed and has not been allowed to see his body.

Johnson's comments, her first to the media about the condolence call from Trump, were likely to fuel a controversy that has swirled for days around the president's handling of the call to the widow.

La David Johnson was one of four US Army soldiers killed on October 4 in an attack in the West African nation. Last week, a member of the US House of Representatives, Frederica Wilson, said she had listened to the call from Trump and that he had upset the family by saying Johnson "knew what he signed up for."

That drew a sharp rebuke from the president, who dubbed Wilson "whacky" and denied her account of the call. "I didn't say what that congresswoman said," Trump told reporters last week. "I had a very nice conversation with the woman, with the wife who ... sounded like a lovely woman."

In Monday's interview, Myeshia Johnson said, "The president said that he (her husband) knew what he signed up for, but it hurts anyway ...And it made me cry because I was very angry at the tone of his voice and how he couldn’t remember my husband’s name."

In a Twitter post on Monday soon after the interview aired, Trump said, "I had a very respectful conversation with the widow of Sgt. La David Johnson, and spoke his name from beginning, without hesitation!"

Johnson said that when Trump called, she and other family members were in a limousine riding to an airport where her husband's body was shipped. Wilson was also in the car.

Johnson said she did not say anything during the call, adding that afterward, she was "very upset and hurt. It made me cry even worse."

Asked what she might now say to Trump, Johnson said she had "nothing to say to him."

The widow also said that the military has told her little about what happened in Niger, and that she is upset that she has not been allowed to see her husband's body.

"I don't know what's in that box," said of her husband's coffin. "It could be empty for all I know."

The attack earlier this month, which U.S. officials suspect was carried out by a local affiliate of Islamic State, has thrown a spotlight on the U.S. counter-terrorism mission in Niger, which has about 800 U.S. troops.