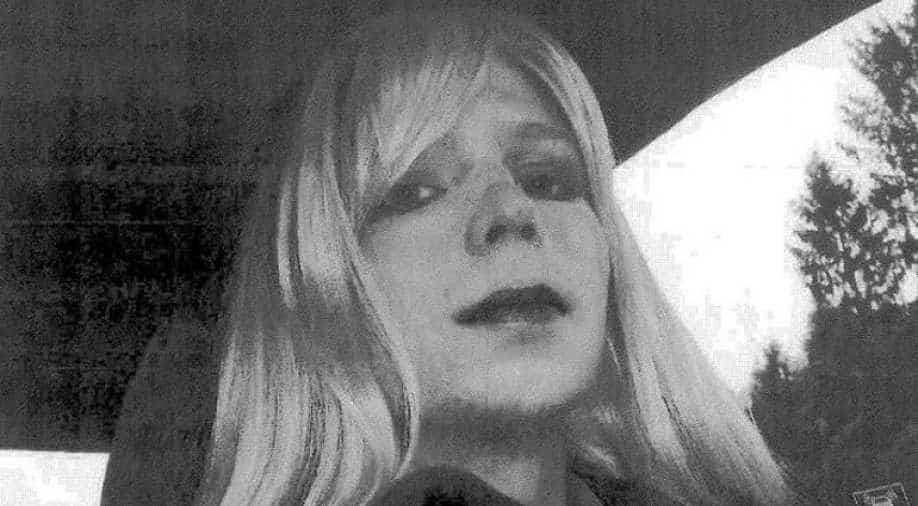 Obama pardoned Manning before leaving office. If he hadn't, she would have remained in prison till 2045. Photograph:( Reuters )

Chelsea Manning was arrested?in 2010 over the release of more than 700,000 classified military and diplomatic documents via WikiLeaks ||Then a male soldier known as Bradley, she has surreptitiously become an icon for transgender activists ||Her sentence was commuted by Obama before he left office

US army whistleblower Chelsea Manning has been released from prison after serving a seven-year prison term.

Former US army intelligence analyst Chelsea Manning, a transgender was jailed for one of the largest leaks of classified documents in US history walked free from a military prison today.

Manning "has been released from the United States Disciplinary Barracks" at Fort Leavenworth, Kansas, spokeswoman Cynthia Smith said in a brief statement.

"After another anxious four months of waiting, the day has finally arrived. I am looking forward to so much!" Manning, whose sentence was commuted by former president Barack Obama, said in a statement via her legal team.

"Whatever is ahead of me, is far more important than the past," said the 29-year-old, who served seven of a 35-year sentence over one of the largest leaks of classified documents in US history.

"I'm figuring things out right now -- which is exciting, awkward, fun, and all new for me."

In July 2010, Manning, then a male soldier known as Bradley, was arrested over the release of a huge trove of more than 700,000 classified military and diplomatic documents via WikiLeaks.

Without Obama's parting gift, Manning, who served as an intelligence official in Iraq, would have remained behind bars until 2045, after serving a 35-year sentence.

Supporters of Manning -- who attempted suicide twice last year alone -- said they feared she would not have been able to survive the long sentence. Now, she can complete her transition as a free, openly transgender woman.

Manning, now 29, also went on a hunger strike during her detention to denounce the disciplinary measures to which she was subjected -- including stints in solitary confinement.

"For the first time, I can see a future for myself as Chelsea. I can imagine surviving and living as the person who I am and can finally be in the outside world," she wrote last week.

Manning's defense team is intent on protecting her.

The Oklahoma native had a difficult childhood. After her parents' divorce, Manning moved with her mother to Wales, where she repressed her sexuality and was mocked for her effeminate ways.

The military is therefore keen on keeping her release low-key. No press conference is planned and media massing at the military installation may be hard-pressed to even catch a glimpse of Manning.

"To ensure the privacy and security of Inmate Manning, no further information concerning the release will be provided," US Army spokesman Dave Foster said in a statement.

Manning, of whom few photographs are publicly available, could find refuge at an aunt's home in the Washington region.

Virtually unknown at the time of her arrest, Manning today is a well-known figure around the world.

Labeled a traitor by President Donald Trump, she has gained the support of celebrities and is seen by many Americans as a courageous rights activist who  was handed an unfair sentence for revealing civilian deaths caused by US bombings in Iraq and Afghanistan.

She wasn't able to flee abroad like Edward Snowden, who in 2013 released documents showing that the NSA was sweeping up US citizens' communications metadata.

Ahead of Manning's release, a group of musicians released a compilation album with all proceeds to go to the former soldier as she starts a new life.

"Hugs for Chelsea," a digital album available for a $25 donation, features tracks by artists known for their left-wing activism including Rage Against the Machine guitarist Tom Morello and Sonic Youth co-founder Thurston Moore.

Manning has also surreptitiously become an icon for transgender activists.

"The first thing Chelsea always says when we talk about her freedom is that she wants to give back to the trans community," said Chase Strangio, an American Civil Liberties Union lawyer who is himself transgender.

Manning was able to start hormonal treatment in prison to begin transitioning toward her female identity. This transition is certain to speed up outside a prison environment Manning said denied her "right to exist."

While Manning's sentence was commuted, her conviction remains intact. Manning, who will turn 30 in December, has appealed.

She is also still employed by the army, and retains its insurance coverage.