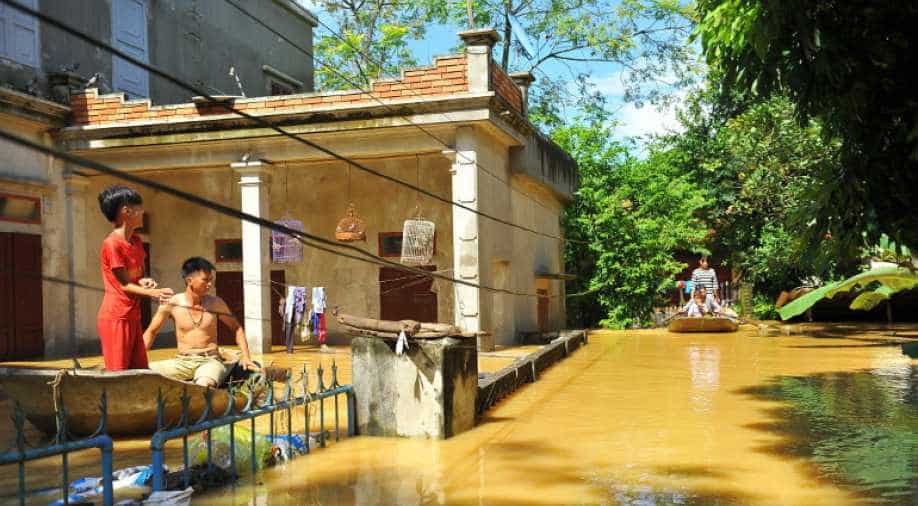 The death toll from devastating floods and landslides in the north and central Vietnam has jumped to 54, officials said Friday, in one of the deadliest weather disasters to hit the country in years.

Rescuers were desperately searching for 39 people still missing after heavy rains pounded several provinces this week, with forecasters warning of another major storm heading toward the country.

This week's catastrophes destroyed thousands of properties and wiped out swathes of farmland, including outside Hanoi where part of a river dyke collapsed and flooded nearby communities.

"Our whole village lost all our fish and vegetables in the water," 63-year-old farmer Ngo Van Thanh told state-controlled VNExpress.

Villages, roads and homes across several provinces remained submerged Friday, as authorities tried to clear roads and reach isolated residents in the mountainous north, which was hit by deadly landslides.

Northern Hoa Binh province -- where a state of emergency was declared this week -- was the hardest hit with 17 dead and 15 missing, followed by central Thanh Hoa province where 14 were killed, Vietnam's Disaster Management Authority said.

Thousands of police and soldiers were deployed to help search efforts, reinforce dykes and hand out food as the death toll jumped from 37 people on Thursday.

Vietnam has already been hit by severe rain and storms this year, with nearly 170 people dead or missing before the latest bout of bad weather. Typhoon Doksuri killed 11 people and caused widespread destruction last month when it slammed into central Vietnam.

The country is routinely hit by tropical storms from May to October, frequently lashing its central coast. More than 150 people died when Tropical Storm Ketsana tore through the country in 2009.