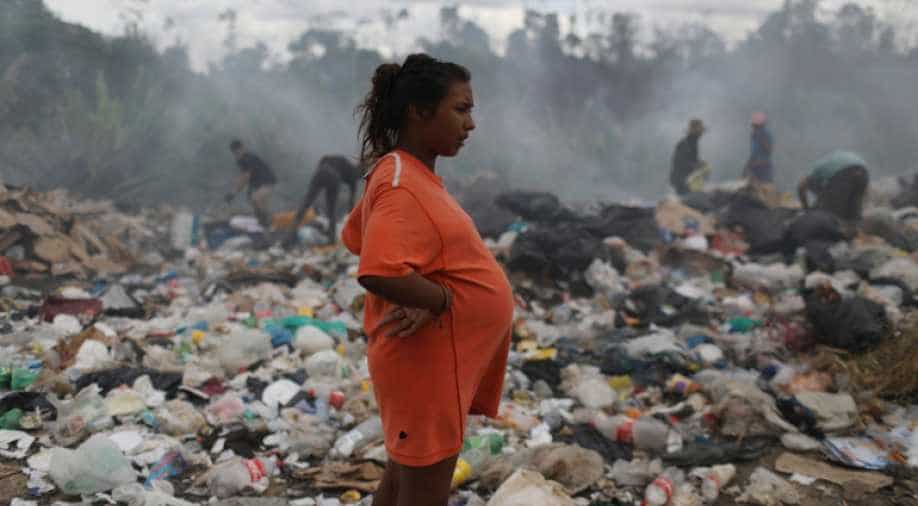 Venezuelan migrant is seen at a garbage dump in the border city of Pacaraima, Brazil. Photograph:( Reuters )

Trapped in a wasteland limbo, they barely make enough to feed their families and cannot afford a bus ticket to get away and find regular work in Brazilian cities to the south.

Surrounded by vultures perched on trees awaiting their turn, Venezuelan migrants scrape out a living scavenging for metal, plastic, cardboard and food in a Brazilian border town's rubbish dump.

Trapped in a wasteland limbo, they barely make enough to feed their families and cannot afford a bus ticket to get away and find regular work in Brazilian cities to the south.

They blame leftist President Nicolas Maduro for mismanaging their oil-producing nation's economy and causing the deep crisis that has driven several million Venezuelans to emigrate across Latin America.

"I left because I was dying of hunger. We are trying to get ahead looking through this rubbish. Every night I pray to God to take me out of here," said Rosemary Tovar, a 23-year-old mother from Caracas.

Tens of thousands of Venezuelans have fled the political and economic upheaval in their country through Pacaraima, the only road crossing to Brazil, overloading social services and causing tension in the northern border state of Roraima. More than 40,000 Venezuelans have swollen the population of state capital Boa Vista by 11 per cent, Mayor Tereza Surita told Reuters.

The influx has also been a headache for Brazil's new, far-right government of President Jair Bolsonaro, who has so far resisted US pressure to take a more forceful attitude against Maduro. About 3.7 million people have left Venezuela in recent years, mostly via its western neighbour Colombia, according to the World Bank.

A dozen Venezuelans scramble to grab bags of rubbish that tumble from the Pacaraima trash truck twice a day. They then sift through the piles as fetid plumes of smoke rise from the smouldering landfill. Sometimes they scavenge at night using headlamps.

"We are looking for copper and cans, and hopefully something valuable, even food," said Astrid Prado, who is eight months pregnant. "My goal is to get out of here. Nobody wants to spend their life going through garbage."

Charly Sanchez, 42, arrived in Brazil a year ago and has not been able to get to Boa Vista to get his work papers so that he can find employment.

On a lucky day he said he had found a discarded cellphone, but not today. Some spaghetti, a small jar of sugar and a bit of cooking oil was Sanchez's pickings for the day.

Samuel Esteban, using a breathing mask for the smoke, stuffed cardboard into a large sack. For 50 kilos he will earn five reais, one third of the minimum monthly wage in Venezuela but just enough to buy a litre of milk in Brazil and some bread.

Tovar criticized Maduro for denying that Venezuela is facing a humanitarian crisis.

"He is so wrong. Look at us here in this dump," she said. "If Maduro does not leave Venezuela, I will never return there."