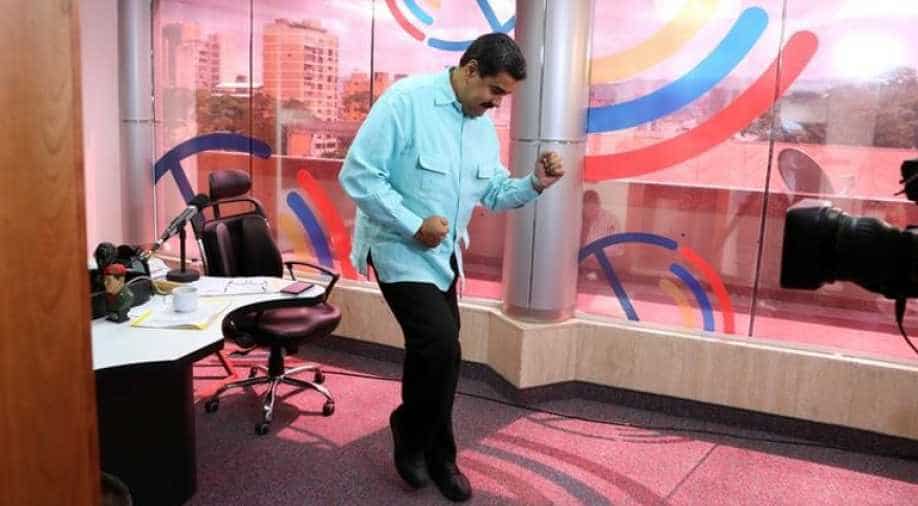 Maduro celebrated his 54th birthday on Wednesday with a live performance by old-school salsa greats El Gran Combo de Puerto Rico. 'What a surprise!' the President exclaimed before taking the first lady for a spin, dancing to the classic 'Me libere' Photograph:( Reuters )

Venezuelans are running short of food, medicine and patience, but fear not: President Nicolas Maduro is here to cheer them up -- by dancing salsa.

Grinning under his black mustache, the burly, towering socialist swivels his hips and twirls his wife Cilia Flores in front of the cameras.

"People say I'm crazy for dancing salsa," he said on one recent broadcast.

Maduro launched a radio show, 'Salsa Hour', late last month on the same day that opposition lawmakers called for a political trial against him

"Hands up everybody who dances salsa! Admit it, we're all crazy!"

With hunger and violent crime gripping the country and the opposition calling for his head, this is Maduro's new strategy for winning hearts and minds. That is an uphill battle; most Venezuelans would like him to leave power.

Wednesday was a case in point as Maduro celebrated his 54th birthday with a live performance by old-school salsa greats El Gran Combo de Puerto Rico.

"What a surprise!" the president exclaimed before taking the first lady for a spin, dancing to the classic "Me libere."

But his continued capering amid the crisis, and his recent launch of a dedicated salsa radio show, seem like bad taste to some weary citizens.

"He is ridiculous. It's offensive. He is laughing at the people," said Euro Bermudez, 62, coming out of a bank in Caracas after collecting his pension.

"Instead of spending money on television programs, he should be bringing us medicine."

Spoof photo "memes" of Maduro online have shown him dancing in various inappropriate settings: at the scene of a crime or in a long queue for food.

But truck driver Orlando Zacarias, 49, said he saw Maduro's dancing as a necessary means of continuing the "socialist revolution."

"Little by little, he is reaching out to each and every Venezuelan to transmit his message," Zacarias said.

Salsa time
Maduro launched his radio show "Salsa Hour" late last month on the same day that opposition lawmakers called for a political trial against him.

They say mismanagement and corruption in his government have plunged the country into crisis.

The opposition won control of the legislature in elections a year ago.

Now Maduro is using salsa's popular beats to reach out to ordinary Venezuelans who deserted him in that vote, says social psychologist Ricardo Sucre.

"He wants to show himself to be confident and relaxed, not as though his government is about to fall."

Maduro himself brands the crisis a US-backed capitalist conspiracy.

He casts his programs as a counterweight to media that he says are out to discredit him.

Dancing through scandal
The last edition of his television program "In Touch With Maduro" lasted four hours and featured a live salsa band.

With his long broadcasts, Maduro is carrying on a tradition of his late mentor and predecessor Hugo Chavez.

Maduro lacks Chavez's charisma, Sucre says, but all the same "Chavez chose him as his successor because he could get through difficult times without looking nervous."

Maduro weathered a scandal last week when a US jury convicted two of his wife's nephews of plotting to smuggle cocaine.

But the following Sunday, the presidential couple were on television dancing for the nation.

"Are you still dancing now?" said senior opposition leader Henrique Capriles. "The country is waiting for you to face up to things."

'Indestructible'
Maduro's "Salsa Hour" lasts two hours, with the leader chatting to listeners about the artists as well as social issues.

He dedicates songs sarcastically to his opponents.

One tune goes out to the opposition leader of congress, Henry Ramos Allup.

"You're crazy, crazy," goes the song by Roberto Roena. "And I am cool."

Ramos is one of the leaders of efforts to drive Maduro from office. Maduro has staunchly resisted. He has the public backing of the army and control of key institutions.

As his own personal theme tune, Maduro has adopted a Ray Barretto salsa classic: "Indestructible."