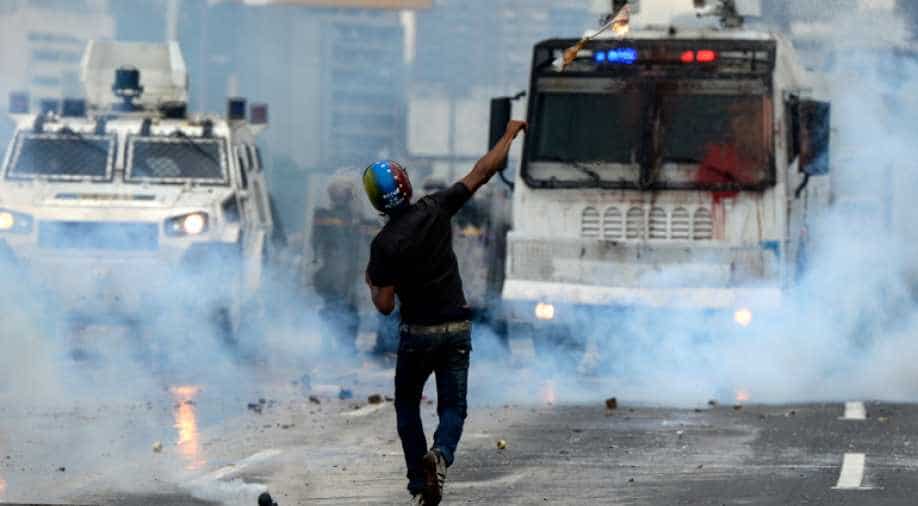 Opposition activists and riot police clash during a protest against President Nicolas Maduro, in Caracas on May 8, 2017. Photograph:( AFP )

The current unrest erupted on April 1 when the opposition took to the streets in anger at what they saw as moves to strengthen elected socialist President Nicolas Maduro's hold on power.||||Monday saw the latest in weeks of violence as opponents mounted fresh demonstrations against Maduro.

A 17-year-old boy and two men died in Venezuela after being shot during anti-government protests, prosecutors said Tuesday, bringing to 42 the number of people killed in six weeks of unrest.

The latest deaths made the recent wave of clashes almost as deadly as the last such disturbances in 2014, when 43 people were killed in anti-government protests.

"They cannot go on killing and torturing people, and getting away with it," said Organization of American States chief Luis Almagro, one of Maduro's harshest international critics.

The UN Security Council will discuss the crisis in Venezuela on Wednesday, diplomats said in New York. The United States requested the closed-door talks to be held in the morning.

The current unrest erupted on April 1 when the opposition took to the streets in anger at what they saw as moves to strengthen elected socialist President Nicolas Maduro's hold on power.

The government and the opposition have accused each other of sending armed groups to sow violence in the protests.

The boy was hospitalized after being shot in the head Monday during a demonstration in the western town of Pedraza and died early Tuesday, the public prosecution service said in a statement.

He was at the scene of a demonstration "when suddenly a group of people arrived and fired several shots, wounding the young man in the head," it said.

The department added that two other men, aged 31 and 33, had died from gunshots they suffered in demonstrations in the cities of San Antonio de los Altos and Tachira.

Monday saw the latest in weeks of violence as opponents mounted fresh demonstrations against Maduro.

Police have fired tear gas and protesters have hurled rocks and Molotov cocktails in a near-daily series of clashes.

The center-right opposition blames elected socialist leader Maduro for an economic crisis that has caused shortages of food and medicine.

It wants early elections to remove him from office.

Maduro has vowed general elections will take place as scheduled in late 2018 but not before.

He has accused the opposition of mounting an "armed insurgency" against him with US backing.

The president also extended for 60 days a legal state of emergency that has been in effect since January 2016, enabling him to restrict constitutional rights and take special political, economic and public safety measures as he sees fit to address crises.

An 18-year-old man also died from a wound to the chest during a demonstration in the western town of Palmira, the prosecution service said on Monday.

Two police and a civilian were injured by bullets in other towns, authorities and opposition leaders said.