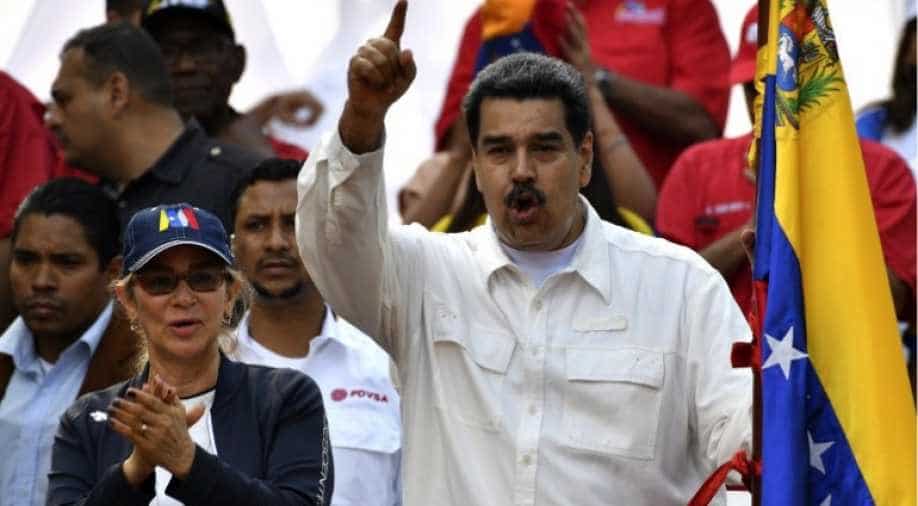 In an evening address on television, Nicolas Maduro, Venezuela's socialist President on Monday said that authorities arrested 11 people in connection with a weekend raid of a remote military outpost in southern Bolivar state.

Venezuela has arrested eleven people in connection with a weekend raid of a remote military outpost in southern Bolivar state, but some suspects have fled across the border to Brazil with stolen weapons, President Nicolas Maduro said on Monday.

Authorities have accused Brazil, Colombia and Peru - all adversaries of socialist Maduro who recognize opposition leader Juan Guaido as the rightful president - of complicity with the attack, in which one Venezuelan soldier was killed. All three countries' governments have denied involvement.

In an evening address on state television, Maduro called on Brazilian President Jair Bolsonaro to cooperate.

"Capture the assailants in Brazilian territory and return the weapons to the Venezuelan armed forces," Maduro said.

He said the eleven detainees included both military and civilian suspects, without providing details.

Authorities have blamed "extreme sectors of the opposition" for the raid. Venezuela, whose economy has collapsed under Maduro, has been locked in a deep political crisis since Guaido, the head of the opposition-held National Assembly, assumed a rival presidency in January.

Maduro dismisses Juan Guaido as a US puppet seeking to oust him in a coup.

Information Minister Jorge Rodriguez said in an earlier address on Monday that Darwin Balaguera, a former National Guard member who deserted in February and fled to Colombia, was detained over the raid. The channel broadcast video of Balaguera answering authorities' questions in custody.

Balaguera was among hundreds of Venezuelan soldiers who defected to Colombia during a Guaido-led attempt to bring humanitarian aid into the country through Colombia and Brazil in February. Some have said they are prepared to take up arms to remove Maduro.

Olnar Ortiz, an attorney with nonprofit rights group Penal Forum, said at least seven members of the Pemon indigenous group were arrested in connection with the incident. Ortiz said four other Pemon individuals were missing.

Ortiz said authorities raided homes in the Pemon village of Kumarakapay near Venezuela's border with Brazil on Sunday evening, searching for suspected participants in the raid.

"They are criminalizing everyone without concrete evidence, without respect for due process," Ortiz said.

There were deadly confrontations between indigenous Pemon and authorities during the February aid effort. Troops loyal to Maduro blocked the aid from entering.