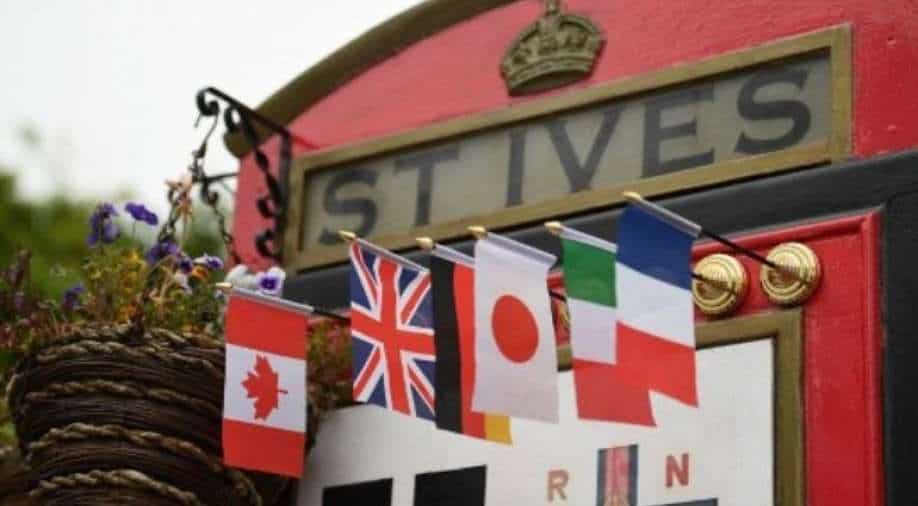 Flags of the G7 nations are displayed on a repurposed red telephone box housing a mini art gallery in St Ives, Cornwall ahead of the three-day G7 summit. Photograph:(AFP)
Follow Us

The issue will be on the table when G7 leaders discuss how to help steer the world's recovery from the coronavirus pandemic at a three-day summit in Cornwall, England, which began on Friday.

The United States and other Group of Seven nations are considering reallocating $100 billion from the International Monetary Fund's warchest to help countries struggling to cope with the COVID-19 crisis, the White House said.

The issue will be on the table when G7 leaders discuss how to help steer the world's recovery from the coronavirus pandemic at a three-day summit in Cornwall, England, which began on Friday.

"The United States and our G7 partners are actively considering a global effort to multiply the impact of the proposed Special Drawing Rights (SDR) allocation to the countries most in need," the U.S. president's office said.

"At potentially up to $100 billion in size, the proposed effort would further support health needs – including vaccinations," it said, adding that it would help promote a more sustained and inclusive global recovery.

SDRs are the IMF's reserve asset and are exchangeable for dollars, euros, sterling, yen, and Chinese yuan or renminbi. Member states can loan or donate their SDR reserves to other countries for their use.

The United States, which has targeted the SDR allocation to be distributed around the "late (northern) summer," on Friday said: "We strongly support the effort to recycle SDRs to further support health needs."

IMF Managing Director Kristalina Georgieva, who will speak virtually with G7 leaders this weekend, on Wednesday told a separate event that she expected the fund's governors to approve a $650 billion boost in SDRs in mid-August.

The global lender is continuing to study how best richer countries could donate or loan their reserves to benefit poorer nations. Details are expected in early autumn.

French President Emmanuel Macron on Thursday called on the other G7 nations to find an agreement on reallocating $100 billion in SDRs to African states.

World finance chiefs agreed in April to issue new SDRs and extend a debt-servicing freeze to help developing countries deal with the pandemic, although only $34 billion of the $650 billion in new reserves will be allocated to Africa since SDRs are issued according to the size of a member's holding in the IMF.