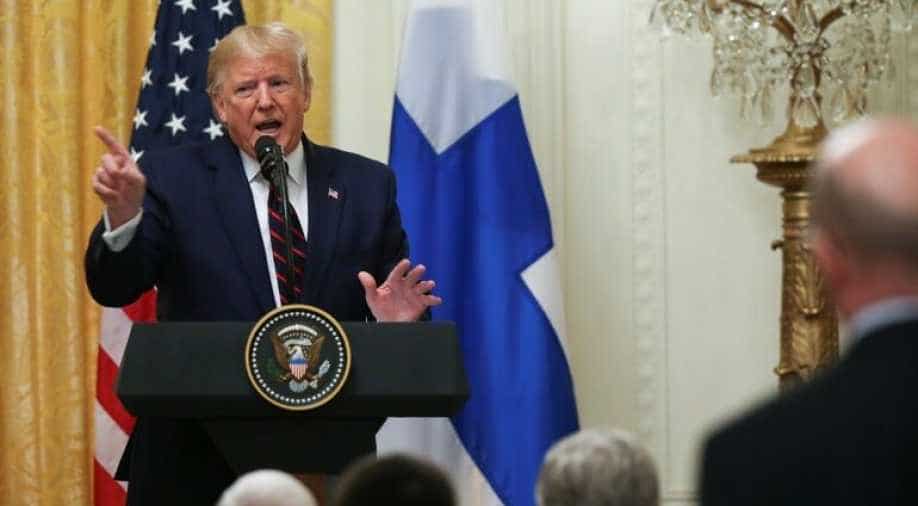 Trump on Wednesday called Biden and his son Hunter "stone-cold crooked." The president has repeatedly accused the pair of wrongdoing without providing any evidence.

President Donald Trump on Wednesday angrily denounced an impeachment inquiry into his July telephone call with Ukraine's leader as Democratic lawmakers said they would subpoena White House records about the call.

At a joint news conference with Finland's president, a frustrated Trump blasted reporters who asked about the probe, which he called a hoax and a fraud, but said he would cooperate with the inquiry. "I always cooperate," he said.

His voice rising with anger, Trump lashed out at Reuters reporter Jeff Mason, who asked what he had wanted Ukrainian President Volodymyr Zelenskiy to do when Trump brought up the business ties to Ukraine of Hunter Biden, son of Democratic presidential candidate Joe Biden.

"It's a whole hoax, and you know who's playing into the hoax? People like you and the fake news media that we have in this country," he retorted. He told the reporter not to be “rude” and repeatedly evaded the question.

Trump suggested, however, that his objective was corruption in Ukraine, saying the United States gives the country a lot of money, and "I don't like giving money to a country that's that corrupt. ... I don't like being the sucker country."

The Democrats' subpoena request has the potential to become a flashpoint in the showdown between the Republican president and the Democratic-led House of Representatives.

US Secretary of State Mike Pompeo, a close ally of Trump, acknowledged earlier in the day during a trip to Italy that he had listened in on the call in which Trump asked Zelenskiy to investigate Biden, a former U.S. vice president and a leading contender for the Democratic nomination to face Trump in the 2020 presidential election.

The call prompted the House to launch its impeachment inquiry last week. Pompeo's admission came a day after he objected to Democratic efforts as part of the impeachment inquiry to obtain depositions from five current and former State Department officials.

"We're not fooling around here, though. We don't want this to drag on months and months and months, which appears to be the administration's strategy," House Intelligence Committee Chairman Adam Schiff, whose panel leads the inquiry, told a news conference alongside House Speaker Nancy Pelosi.

House Oversight Committee Chairman Elijah Cummings said he intended to subpoena the White House for the Ukraine-related records on Friday, the latest demand for evidence from an administration that has repeatedly resisted such efforts by Democrats.

Trump seemed to make light of the request, telling reporters that Pelosi "hands out subpoenas like they're cookies."

Schiff said Democrats were deeply concerned about the Trump administration's potential interference with witnesses, and that any such efforts by the president, Pompeo or others would be considered obstruction of justice.

The House launched its impeachment inquiry, which threatens Trump's presidency, following a complaint brought by a whistleblower within the US intelligence community over Trump's request to Zelenskiy.

The whistleblower provided an account of his concerns to a House Intelligence Committee aide before bringing his complaint, and some of that information was shared with Schiff, the New York Times reported, citing a spokesman for Schiff and current and former U.S. officials.

Trump said the newspaper's report showed that "Schiff is a fraud" and the president called it a "scandal" that Schiff had advance knowledge of the complaint. "He probably helped write it," Trump said, without offering evidence.

Trump made his request to Zelenskiy shortly after he had frozen nearly $400 million in aid to Ukraine. Zelenskiy agreed to the request on the call, and the aid was later provided.

Democrats have accused Trump of pressuring a vulnerable US ally to meddle in the 2020 election for his political benefit.

"It's hard to imagine a more corrupt course of conduct," Schiff said.

Scrutiny of Pompeo's role in the administration's interactions with Ukraine, including the recall of the U.S. ambassador to Kiev earlier this year, rose after the Wall Street Journal reported that the top US diplomat had listened in on the Trump-Zelenskiy call.

"I was on the phone call," Pompeo told reporters in Rome on Wednesday.

Pompeo sought to portray the call as proper, saying it was in the context of US policymaking in Ukraine, including "taking down the Russia threat," rooting out corruption in government and boosting the economy.

The Democratic chairmen of three House committees have accused Pompeo of intimidating witnesses and said he was considered "a fact witness" in the impeachment inquiry based on his role in Trump's call with Zelenskiy.

Pompeo said State Department employees had been contacted directly by lawmakers or their staff and told not to talk to the State Department's legal counsel. He has said, however, that he would cooperate with Congress.

According to a summary of the July call released by the White House, Trump asked Zelenskiy to investigate Biden and his son Hunter in coordination with U.S. Attorney General William Barr and Giuliani. Hunter Biden had sat on the board of a Ukrainian gas company that had been under investigation by Kiev.

Trump on Wednesday called Biden and his son Hunter "stone-cold crooked." The president has repeatedly accused the pair of wrongdoing without providing any evidence.

Biden shot back in remarks prepared for a speech in Reno, Nevada, on Wednesday night, accusing Trump of "abuse of power."

"Let me make something clear to Trump and his hatchet men and the special interests funding his attacks against me - I'm not going anywhere," Biden said, according to excerpts provided by his campaign.

The prospect that Trump solicited Ukraine's help against his potential challenger next year has infuriated Democrats, many of whom blame the loss of the 2016 presidential election on Russian interference. Moscow has denied interfering in that campaign.

On Wednesday, Russian President Vladimir Putin said he saw no evidence of pressure in Trump's July conversation with Zelenskiy and added that there was nothing wrong with the US president asking for an investigation into potential corruption.

US intelligence agencies and Special Counsel Robert Mueller concluded that Russia interfered in the 2016 election with a scheme of hacking and propaganda to boost Trump's candidacy and disparage his Democratic opponent Hillary Clinton.

Kurt Volker, who resigned last Friday as Trump's special representative for Ukraine, is scheduled to give a deposition to House staff on Thursday. Marie Yovanovitch, who was U.S. ambassador to Ukraine until she was abruptly recalled in May, has agreed to appear on Oct. 11. In his phone call with Zelenskiy, Trump called Yovanovitch "bad news."

Representative Michael McCaul, the top Republican on the Foreign Affairs Committee, said in a letter to the panel's chairman, Eliot Engel, that Schiff lacked jurisdiction to investigate the State Department's conduct regarding Ukraine and demanded "equal representation and participation" for Republicans in questioning Volker.

The impeachment probe could lead to approval of articles of impeachment - or formal charges - against Trump in the House. A trial on whether to remove Trump from office would then be held in the Republican-controlled Senate. Republicans, however, have shown little appetite for ousting him.