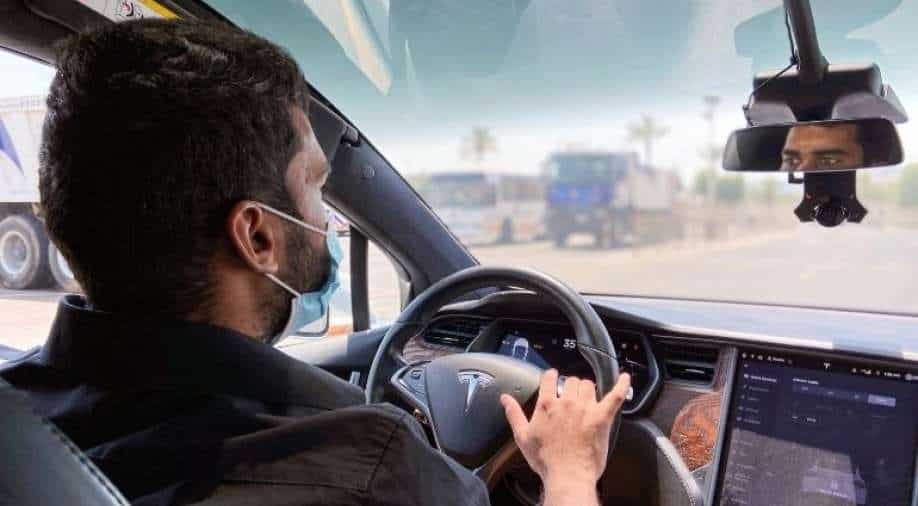 In this photo, a student can be seen learning how to drive in a Tesla. Photograph:( Reuters )

Tesla Chief Executive Elon Musk, who has a long history of clashing with US safety officials, denied there was a safety issue with the function

The auto safety regulators in the United States have launched another investigation of Tesla, this time tied to complaints that its cars can stop on roads for no apparent reason.

“Complainants report that the rapid deceleration can occur without warning, and often repeatedly during a single drive cycle,” the agency says.

Tesla Chief Executive Elon Musk, who has a long history of clashing with US safety officials, denied there was a safety issue with the function.

"The car simply slowed to ~2 mph & continued forward if clear view with no cars or pedestrians," Musk wrote on Twitter.

Also read | 'Somebody's going to get killed': Why Tesla added feature that allows driver to play video game while driving?

The vehicles are equipped with partially automated driver-assist features such as adaptive cruise control and “Autopilot,” which allows them to automatically brake and steer within their lanes.

National Highway Traffic Safety Administration (NHTSA) ordered Tesla to issue a recall to prevent some of its vehicles from making "rolling stops" instead of coming to a complete halt at some intersections.

Tesla has said it develops almost all its software to allow for regular over-the-air updates. The carmaker has issued software updates that control vehicle performance, braking, battery charging and infotainment functions.

Tesla has led the auto industry in over-the-air recall updates. While nearly all recalls issued by NHTSA since 2020 required physical fixes, seven of Tesla's 19 recalls since January 2020, or 37 per cent, were addressed with over-the-air software updates, an analysis of public data showed.

Michael Brooks, acting executive director of the nonprofit Centre for Auto Safety, said it’s encouraging to see NHTSA’s enforcement actions “after years of turning the other way,” with Tesla. But he said the company keeps releasing software onto US roads that isn’t tested to make sure it’s safe.

“A piecemeal investigative approach to each problem that raises its head does not address the larger issue in Tesla’s safety culture — the company’s continued willingness to beta test its technology on the American public while misrepresenting the capabilities of its vehicles,” Brooks said.

In a letter to US District Judge Alison Nathan, attorneys for Musk, a longtime critic of the Securities and Exchange Commission (SEC), accused the agency of propagating "endless unfounded investigations" into the Tesla boss and his company.

"The SEC seems to be targeting Mr. Musk and Tesla for unrelenting investigation largely because Mr. Musk remains an outspoken critic of the government," Spiro said.