US intelligence chief Dan Coats to resign from Trump administration 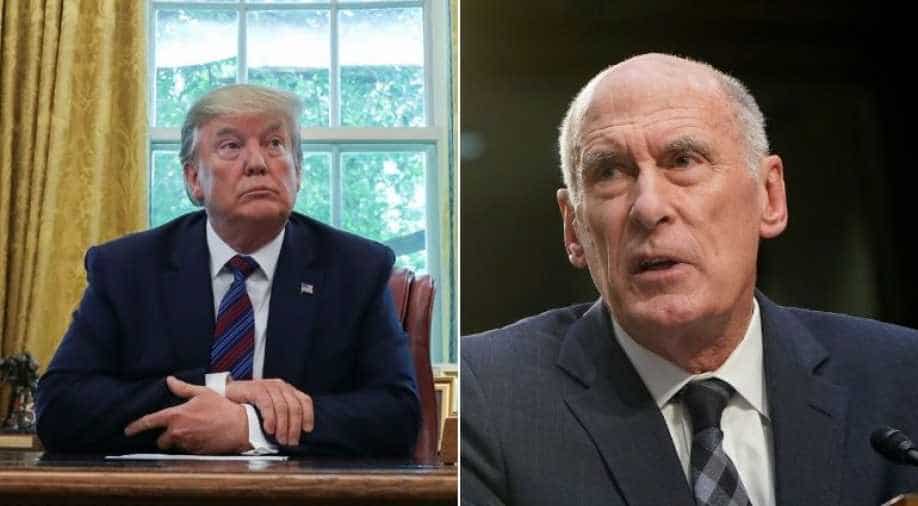 Coats was regularly at odds with Trump during his tenure as Director of National Intelligence and at times appears to have been kept in the dark by his administration, but tried to avoid confrontation with the mercurial president.

Coats was regularly at odds with Trump during his tenure as Director of National Intelligence and at times appears to have been kept in the dark by his administration, but tried to avoid confrontation with the mercurial president.

Trump tweeted that he plans to nominate Representative John Ratcliffe of Texas, who serves on the House intelligence, judiciary and homeland security committees, as the next official to oversee and coordinate the CIA, NSA and other US espionage bodies.

"A former US Attorney, John will lead and inspire greatness for the country he loves," Trump wrote, also thanking Coats "for his great service to our Country."

....be leaving office on August 15th. I would like to thank Dan for his great service to our Country. The Acting Director will be named shortly.

If Ratcliffe's nomination is approved, Trump will get an intelligence chief who is more in synch with his views.

In Congress, he has been a staunch defender of Trump and has criticized two of the president's nemeses, former FBI chief James Comey and special counsel Robert Mueller.

Ratcliffe has also said he has "seen no evidence" that Russian election meddling helped bring Trump to office, has backed the president's assertion that court-approved surveillance of his campaign amounted to spying, and has supported his hawkish policy on Iran.

Russian election meddling is just one of several issues on which Coats has not seen eye-to-eye with Trump.

Coats backed the US intelligence community's conclusion that Russia interfered in the 2016 election that brought Trump to office -- something the president was long loath to acknowledge.

The intelligence chief also disagreed with Trump's decision to hold two hours of closed-door talks with Russian President Vladimir Putin in Helsinki in July 2018 with no one else present but interpreters.

"If he had asked me how that ought to be conducted, I would have suggested a different way," Coats said.

He acknowledged being kept in the dark about the contents of the talks, saying three days after they were held that: "I don't know what happened in that meeting."

Trump's attempts to get North Korea to give up its nuclear arsenal via talks with Pyongyang's leader Kim Jong Un was another point of disagreement.

"We continue to assess that North Korea is unlikely to give up all of its nuclear weapons and production capabilities, even as it seeks to negotiate partial denuclearization steps to obtain key US and international concessions," Coats said in the annual "Worldwide Threat Assessment" report earlier this year.

Trump, however, has taken the view that Kim is willing to give up his nuclear arms.

The report also warned that the Islamic State group -- despite Trump's assertions to the contrary -- was hardly vanquished and could easily rise again in a vacuum left by departing US forces, resuming global attacks and restarting its propaganda machine.

The jihadist group "still commands thousands of fighters in Iraq and Syria, and it maintains eight branches, more than a dozen networks, and thousands of dispersed supporters around the world, despite significant leadership and territorial losses," Coats said.