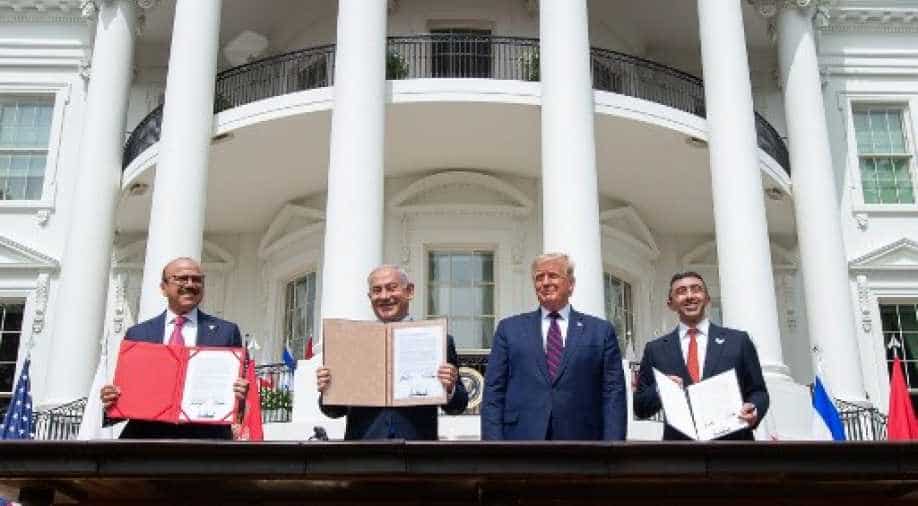 The three countries will also be setting up two new working groups at the meeting, US officials said, with one group focusing on religious coexistence and the other on water and energy issues

The United States is working to expand normalisation agreements between Israel and Arab nations, known as the Abraham Accords, and hopes restoring such ties can be leveraged to advance progress on the Israeli and Palestinian conflict, senior State Department officials said on Tuesday.

In a briefing with reporters previewing US Secretary of State Antony Blinken's meetings on Wednesday with his Israeli and Emirati counterparts, officials repeated that the Abraham Accords were not a substitute for the two-state solution between Israelis and Palestinians.

Also Read | Israel, UAE ministers in US as Biden seeks to expand normalisation

"We continue to welcome the economic cooperation between Israel and all countries in the region. We hope that normalisation can be leveraged to advance progress on the Israeli-Palestinian tracks," a senior State Department official, speaking on the condition of anonymity said.

Blinken will first meet with Israeli Foreign Minister Yair Lapid and United Arab Emirates Sheikh Abdullah Bin Zayed Al Nahyan separately at the State Department on Wednesday. He will then host a trilateral meeting with both of them, the first of its kind.

The leaders of Israel, the UAE and Bahrain signed the Abraham Accords at the White House last September. The following month, Israel and Sudan announced they would normalize relations, and Morocco established diplomatic ties with Israel in December, after US President Joe Biden defeated his predecessor Donald Trump in the election.

Palestinian officials said they felt betrayed by their Arab brethren for reaching deals with Israel without first demanding progress toward the creation of a Palestinian state. Until last year, only two Arab states - Egypt and Jordan - had forged full ties with Israel.

The US officials did not say precisely how Washington aimed to use the normalisation agreements as a tool to make progress on the Israeli-Palestinian issue.

"Biden administration has started out with a clear commitment to the two-state solution. We continue on with that commitment. We seek to advance as we can, when we can, as best we can," one of the US officials said.

The three countries will also be setting up two new working groups at the meeting, US officials said, with one group focusing on religious coexistence and the other on water and energy issues.

"These working groups will seek to realise that promise to link up to important US partners in the region and find new ways to solve old problems together, in Israel and the UAE but also across the region," one of the US officials said.