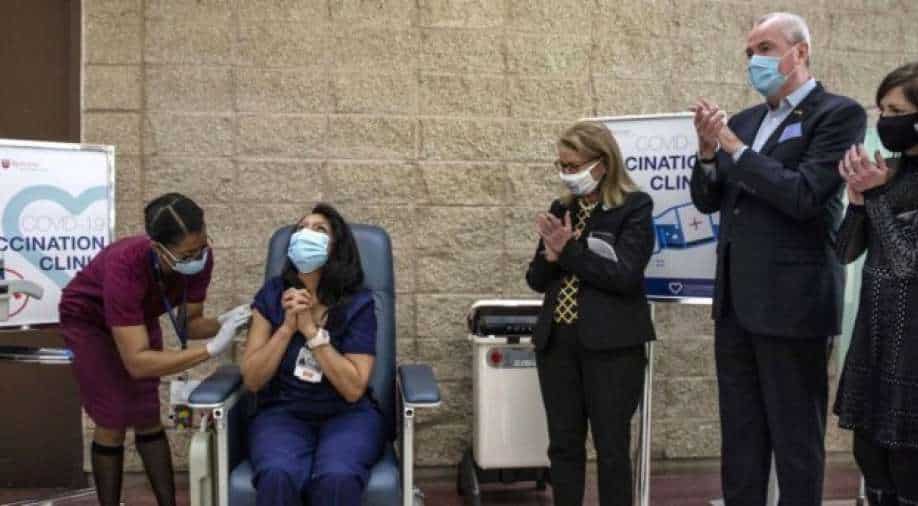 Political leaders and medical authorities have launched a two-pronged media blitz avowing the safety of the vaccines.

The United States expanded its rollout of the newly approved COVID-19 vaccine to hundreds of additional distribution centres on Tuesday, inoculating thousands of more healthcare workers in a mass immunization expected to reach the general public in the coming months.

Distribution of the vaccine developed by Pfizer Inc and German partner BioNTech SE began on Monday, three days after it won U.S. emergency-use authorization, opening a new front in the battle against a pandemic claiming more than 2,400 U.S. lives a day.

Political leaders and medical authorities have launched a two-pronged media blitz avowing the safety of the vaccines while urging Americans to remain diligent about social distancing and mask-wearing until inoculations become widely available.

"As a polio survivor, I am a huge supporter of vaccinations. Whenever my turn comes, I will absolutely take the vaccine and do my part to reassure anyone who's doubtful. It's the right thing to do for yourself, for your family, and for the country," Senate Republican Leader Mitch McConnell said on Twitter.

At University Hospital in Newark, New Jersey, emergency room nurse Maritza Beniquez on Tuesday became the first person in that state to receive the vaccine in one of numerous such made-for-TV moments playing out across the country.

Initial doses have been earmarked for doctors, nurses and other front-line medical professionals, along with residents and staff of nursing homes. Other essential workers, senior citizens and individuals with chronic medical conditions will be next in line.

It will take several months, perhaps until late spring, before vaccines can be obtained on demand by the public at large, U.S. officials have said.

In the meantime, a surge of infections and hospitalizations - approaching 111,000 patients in treatment on Tuesday - continued to strain healthcare systems to the brink of collapse in cities and rural areas across the country.

Nationwide, the highly contagious respiratory virus has killed 301,085 people and infected at least 16.5 million as of Monday, according to a Reuters tally of official data.

In California, where many hospitals had little or no capacity available in their intensive care units, the state has ordered scores of refrigerator storage trailers for corpses and distributed 5,000 body bags to San Diego, Los Angeles and Inyo counties, Governor Gavin Newsom said.

Newsom said the state also has activated mass-fatality compacts among county coroners and opened discussions with the federal government about sending a military medical ship back to the shores of the hard-hit state.

A bipartisan group of seven governors - from Illinois, Michigan, Indiana, Kentucky, Minnesota, Ohio and Wisconsin - released a joint video on social media on Tuesday urging residents to avoid unnecessary travel and social gatherings outside their households "until we eradicate this virus once and for all."

Another vaccine, from Moderna Inc, appeared set for regulatory authorization this week after U.S. Food and Drug Administration staff endorsed it as safe and effective in documents released on Tuesday. Similar to the Pfizer vaccine, it requires two doses several weeks apart.

By late on Monday, shipments of the Pfizer vaccine, which requires sub-Arctic-level refrigeration, had arrived at nearly all of the 145 U.S. distribution sites pre-selected to receive the initial batch of doses.

The second round of shipments went out on Tuesday destined for 425 more distribution hubs and a third round was headed for 66 additional sites on Wednesday. In all, U.S. officials aim to get 2.9 million doses delivered by week's end.

In addition to the logistical challenges posed by an inoculation program of unparalleled scope - surpassing the childhood polio immunization campaign of the 1950s and '60s - health authorities face the monumental task of overcoming widespread skepticism about vaccines in general.

Some Americans believe the pandemic is a hoax and reject public health guidelines to wear masks and avoid crowds. Only 61% of respondents in a recent Reuters/Ipsos poll said they were open to getting vaccinated.

While most vaccines take years to develop, the Pfizer vaccine arrived less than a year after the illness was traced to a market in Wuhan, China, late last year.

"People understandably are skeptical about the speed, but we have to keep emphasizing speed means the science was extraordinary," Dr Anthony Fauci, director of the National Institute of Allergy and Infectious Diseases, told ABC News' "Good Morning America" on Tuesday.

The pandemic has wreaked economic havoc as states and localities imposed sweeping stay-at-home orders and closed businesses to tamp down the contagion, putting millions out of work.

In Washington, McConnell told reporters lawmakers would not adjourn for the year until they have agreed on a fresh package of coronavirus relief for the unemployed and small businesses, which he hoped could be attached to a larger government funding bill.