US election 2020: Biden says next presidential debate should be called off 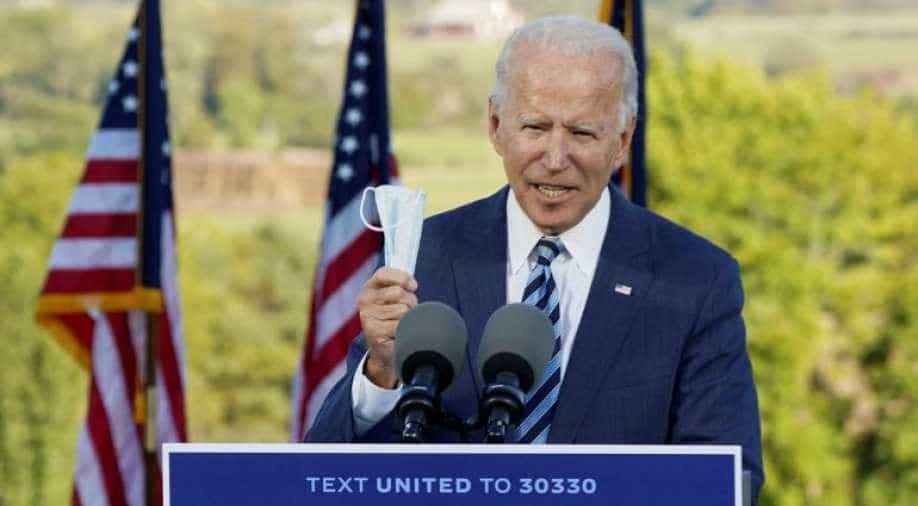 Democratic US presidential nominee Joe Biden holds up his face mask while speaking during a campaign stop in Gettysburg, Pennsylvania Photograph:( Reuters )

Trump has given no indication he would bow out due to his health, saying in a tweet that he is 'looking forward' to the next debate

US Democratic presidential candidate Joe Biden on Tuesday said that the next debate with US President Donald Trump should not take place if Trump is still infected with coronavirus.

Biden told reporters after a campaign stop near the Civil War battlefield site in Gettysburg, Pennsylvania, that "If he still has COVID, we shouldn’t have a debate."

Also see: Here's who has tested positive and negative in Trump's circle

However, he added that the October 15 debate in Miami should only be staged under strict health guidelines and called the coronavirus outbreak that has hit Trump and a wave of other White House officials "a very serious problem."

After days of conflicting messages from doctors and aides about his condition, Trump returned to the White House on Monday after three nights at a hospital. His doctor said on Tuesday that Trump reported no COVID-19 symptoms and was doing "extremely well."

The Republican president announced early Friday, two days after his first debate with Biden in Cleveland, that he had tested positive for the virus.

While the Centers for Disease Control and Prevention guidelines say people who test positive for the virus should stay home for at least 10 days after symptoms first appear, while people who become severely ill might need to stay home for up to 20 days.

Trump has given no indication he would bow out due to his health, saying in a tweet that he is "looking forward" to the next debate.