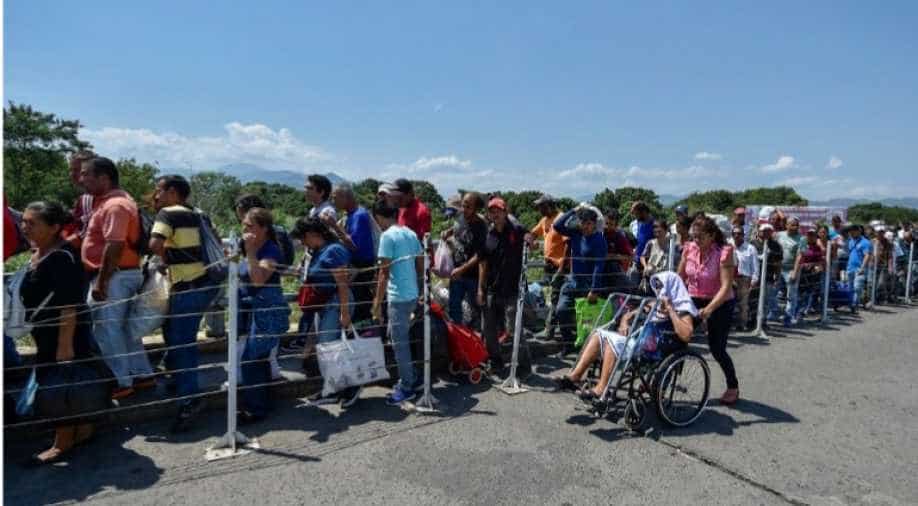 The UNHCR, in a report, estimated that around 4.3 million Venezuelans fled economic and political turmoil in their country, mainly to Colombia, Peru, Chile and Ecuador. Around 180,000 are also staying in Brazil.

The United Nations on Sunday appealed for more humanitarian aid for Venezuelan refugees pouring into neighbouring countries, where they are overwhelming social services and reportedly sparking local tensions.

UN High Commissioner for refugees, Filippo Grandi, had planned to visit the Brazilian town of Pacaraima this weekend, but authorities reportedly advised him to cancel the trip amid fears of protests by residents who are unhappy with the arrival of more than 500 Venezuelans each day.

Last week, the residents of Pacaraima closed shops and marched through the streets, raising slogans such as "Out with the Venezuelans", "Pacaraima is ours", "Out with the UN", and "Brazil for Brazilians".

Grandi said financial institutions such as the World Bank and the Inter-American Development Bank have been engaged, but they need to speed up their help to help sustain health and education systems, Al Jazeera reported.

The UNHCR, in a report, estimated that around 4.3 million Venezuelans fled economic and political turmoil in their country, mainly to Colombia, Peru, Chile and Ecuador. Around 180,000 are also staying in Brazil.

In June, the Organisation of American States said that the Venezuelan exodus may exceed eight million people by the end of next year, which would make it the largest migration crisis in the world.

The group's projection puts the exodus between 7.5 million and 8.2 million in 2020, far surpassing the 6.7 million people who have fled war-torn Syria in eight years.

Grandi said there were signs of anti-immigrant sentiment spreading across the region, reflected in mounting restrictions on the movement of Venezuelans in Andean countries. Venezuela plunged into a political and economic crisis in January after opposition leader Juan Guaido proclaimed himself as the country's interim president amid throngs of cheering supporters who called for the resignation of legitimate President Nicolas Maduro.

The US immediately extended its support to Guaido, followed by nations like Canada and Britain.

However, countries like Russia and China have backed Maduro and slammed the US for its external interference in Venezuela.

Since then, Washington has been pursuing a policy of economic sanctions and diplomatic isolation against the Maduro government in support of Guaido.