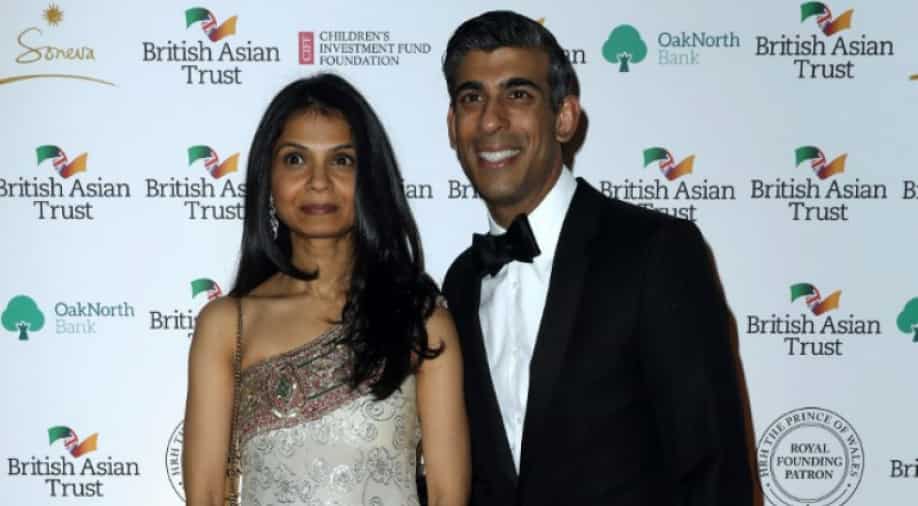 Britain's Chancellor of the Exchequer Rishi Sunak (R) pose with his wife Akshata Murthy (L) for pictures during a reception to celebrate the British Asian Trust at The British Museum on February 9, 2022 in London. Photograph:( AFP )

Rishi Sunak became the first major politician to feature in the Sunday Times rich list as the pair was placed in the 222nd spot with an estimated £730m valuation.

The controversy regarding the wealth of England’s finance minister Rishi Sunak and wife Akshata Murty has been brewing for quite some time. Murty, the daughter of IT firm Infosys co-founder Narayan Murty, currently has 0.9 per cent stake in the company and that earned her £11.6m in dividend income last year. As a result, Sunak became the first major politician to feature in the Sunday Times rich list as the pair was placed in the 222nd spot with an estimated £730m valuation.

This was the first time since 1989 that a major politician was part of the list and with the country going through inflation and soaring fuel prices, this can put Sunak under the spotlight once again.

According to The Guardian, Sunak owns four houses worth an estimated £15m, including a £5m Santa Monica penthouse. Justice secretary Dominic Raab reacted to Sunak’s inclusion to the list and said that this does not mean that he is not in touch with the struggles of the general public.

“He’s a fantastic example of someone who’s been successful in business, who’s coming to make a big impact in public service. I think we want more of those people,” Raab told Times Radio.

I think it’s fantastic that you’ve got someone of British-Indian origin, showing all people in our country that you can get to the top of politics. And frankly, I think if I understood correctly, the Sunday Times rich list was a reflection of not just him but his wife. His wife is an incredibly successful entrepreneur in her own right.” Raab explained while commenting on Sunday Times list.