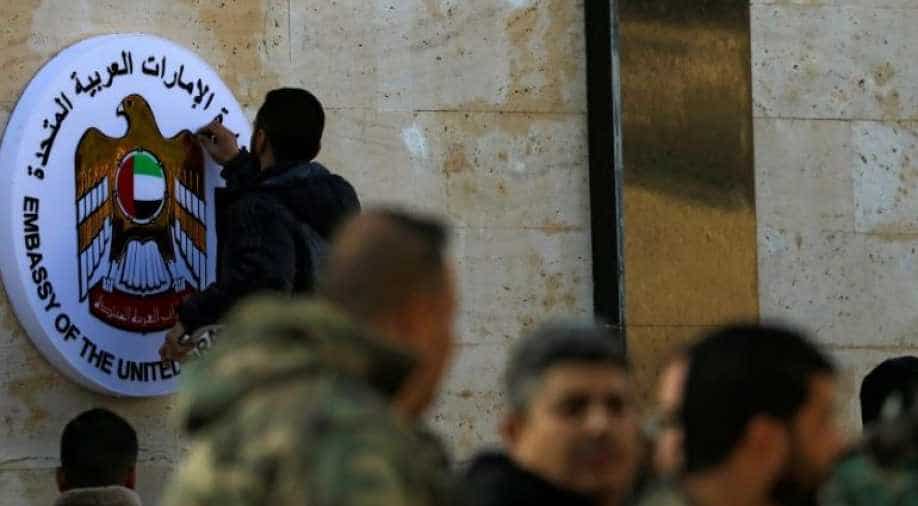 A man works on the emblem of the United Arab Emirates embassy in Damascus during its reopening, Syria December 27, 2018. Photograph:( Reuters )

The UAE broke ties with Syria in February 2012, as the repression of nationwide protests demanding regime change was escalating into a devastating war.

The United Arab Emirates reopened its embassy in Damascus Thursday, the latest sign of efforts to bring the Syrian government back into the Arab fold.

The UAE broke ties with Syria in February 2012, as the repression of nationwide protests demanding regime change was escalating into a devastating war.

Nearly seven years later, the Emirati flag was raised again during a ceremony attended by diplomats and journalists.

An acting charge d'affaires has already started working, an Emirati statement said, stressing that the UAE was "keen to put relations back on their normal track".

It said that the resumption of ties aimed to "support the sovereignty and independence of Syria" and face "the dangers of regional interferences".

Rumours of the Emirati embassy reopening had circulated in recent days as renovation work was spotted getting under way at the building.

A visit to Damascus by Sudanese President Omar al-Bashir earlier this month had been interpreted by some observers as a sign of regional efforts to end Syrian President Bashar al-Assad's diplomatic isolation.

Syria was suspended from the Arab League in November 2011, as the death toll was escalating and several regional powers bet on Assad's demise.

Assad's seat at the helm, which he inherited from his father in 2000, appeared to be hanging by a thread until Russia's 2015 military intervention turned things around.

Government forces and allied militia have since steadily regained significant ground. They now firmly control the Damascus region and several key trade routes in the country.

The past few days have seen a flurry of diplomatic activity that looks set to continue until the next summit of the Arab League, due in Tunis in March.

"Recent discussions on this issue have not yielded a consensus," Hossam Zaki, the League's deputy secretary general, told reporters in Cairo on Monday.

"This does not rule out a possible change of the Arab position in the future," he added.

Ali Mamluk, Syria's intelligence chief and a key figure in the Assad regime, travelled to Egypt last week on an official visit.

With military operations winding down in several parts of the country and the capital fully secure, Damascus is also working on breaking its physical isolation.

Trade with Jordan resumed in recent weeks after the reopening of a border crossing and Thursday saw the first commercial flight to Tunisia in years.

A Cham Wings Airlines jet completed the first flight between the two countries since 2011.

"This trip is the reopening of tourism links between Syria and Tunisia," Moataz Tarbin, the head of the tourism firm that organised the flight, told AFP.

It is not yet clear if other Arab countries, several of which were accused by Assad of once supporting jihadists and rebels, will follow in the UAE's footsteps.

The UAE is one of six Gulf Cooperation Council nations that took a tough stance on Damascus in 2012 and eventually recognised an opposition umbrella group as the representative of Syria.

Warming up to Assad is seen by some regional powers as a way of luring Syria away from the exclusive regional influence of Iran.

"An Arab role in Syria has become even more necessary to face the regional expansionism of Iran and Turkey," UAE Minister of State for Foreign Affairs Anwar Gargash said on Twitter.

Tehran has been a staunch supporter of Assad's government and has expanded its military footprint in Syria throughout the course of the conflict.

Last week's announcement by the White House that US troops would be pulled out also cleared the path for Turkey to muscle in on Kurdish areas in northeastern Syria.

"Saudi Arabia has now agreed to spend the necessary money needed to help rebuild Syria, instead of the United States," Trump said on social media.