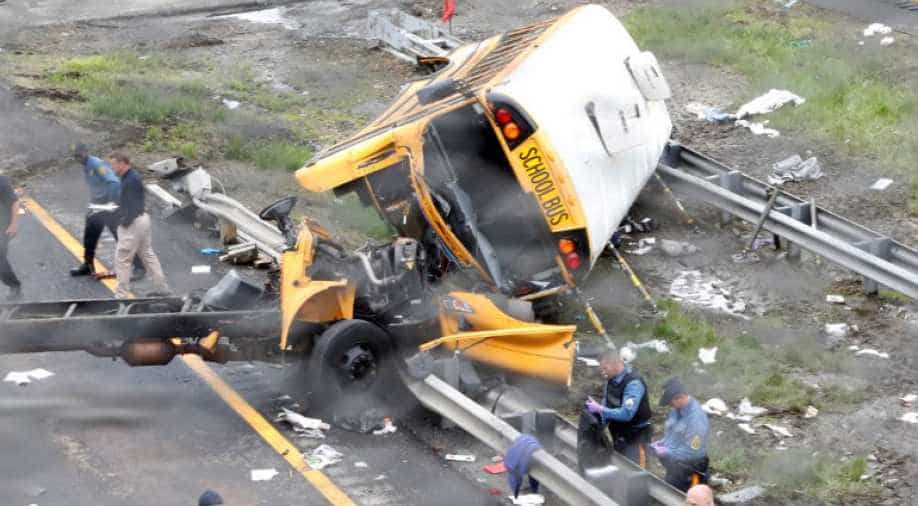 Police stand near the wreckage of a school bus on Interstate 80 following an accident with a dump truck in Mount Olive Township, New Jersey. Photograph:(Reuters)
Follow Us

A student and a teacher were killed and 43 others injured when a school bus with preteens on a field trip collided with a dump truck on a New Jersey highway on Thursday, ripping the bus apart and leaving students dangling by seat belts, officials said.

The crash occurred about 10:20 a.m. in Mount Olive Township in northern New Jersey`s Morris County, Governor Phil Murphy told a news conference. The bus was carrying 38 students and seven adults, including the driver.

"Some patients are in critical condition and currently undergoing surgery, so please keep everybody in your prayers," Murphy said.

“There is an awful lot we just don’t know,” the governor said, adding details of the crash were not being released pending an investigation.

“The bus flew off of the wheels, but it hit the metal thing on the side of the highway,” fifth-grader Theo Ancevski said. He told reporters he escaped through an emergency door on the bus.

"A lot of people (inside the bus) were screaming and they were like, hanging from their seat belts," he added. US fifth-graders are generally aged 10 or 11.

The crash temporarily shut all westbound lanes of I-80, State Police said.

"The children were all over, outside," said Morris County Office Of Emergency Management Director Jeff Paul.

"We had every injury type that you can imagine for a scenario like this. It`s tragic," he told reporters.

Two other buses in the field trip convoy also carrying fifth-graders on the same trip returned to Paramus, officials said.

The operator of the dump truck, Mendez Trucking, had 33 units that drive 1.9 million miles (3.1 million km) in total in 2017 and had been involved in seven crashes over the past two years, US Federal Motor Carrier Safety Administration records showed.

The National Transportation Safety Board, which investigates accidents involving buses, was gathering information but was not investigating the collision, it said on Twitter.