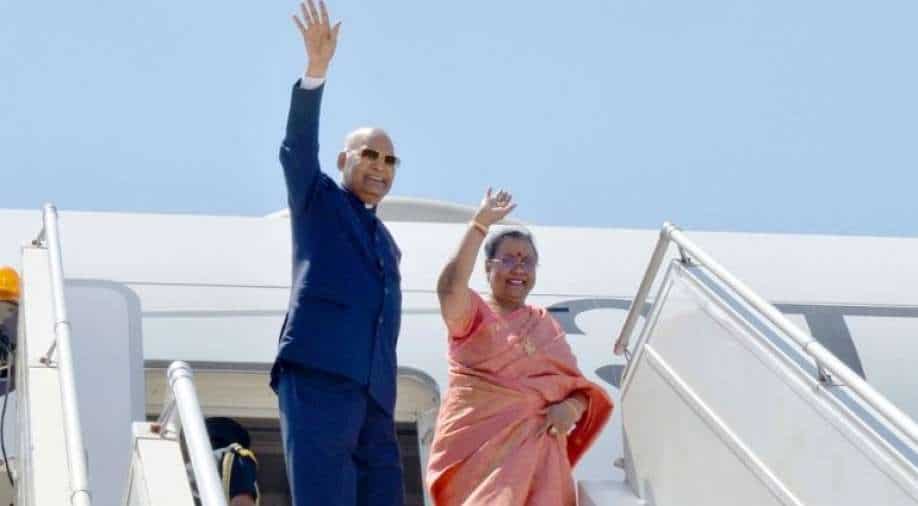 Indian President Ram Nath Kovind with First Lady Savita Kovind wave at the people, as they depart for their official visits to Turkmenistan and the Netherlands, in New Delhi Photograph:( PTI )

It comes as Indian President Ram Nath Kovind is all set to embark on a four-day visit to Turkmenistan's capital, Ashgabat

Turkmenistan has said it will promote the implementation of a stalled gas pipeline that will pass through India.

“Turkmenistan will develop trade and economic ties with Afghanistan, and continue to implement new joint projects in such important areas as energy, transport, and communications, involving Afghan companies to these projects,” as per a joint statement released at the end of a China-led regional conference on Afghanistan.

“In particular, Turkmenistan will promote the implementation of the construction of the transnational gas pipeline Turkmenistan-Afghanistan-Pakistan-India (TAPI), which is an important aspect of trade and economic cooperation, and which will ensure the development and restoration of the social and economic infrastructure of Afghanistan,” the statement added.

It comes as Indian President Ram Nath Kovind is all set to embark on a four-day visit to Turkmenistan's capital, Ashgabat.

Originating at the giant Galkynysh gas field in Turkmenistan, the $9.6 billion TAPI (Turkmenistan, Afghanistan, Pakistan and India) pipeline involves the four countries’ own energy companies, and would carry 33 billion cubic metres (bcm) of gas a year.

Facing more delays, TAPI countries have changed tack to attract financing and make progress in the past two years. The project is now due to be done in two phases, with the pipeline built without compressors in the first phase, which would cut gas volume but would reduce prohibitive project costs.

Once gas starts flowing, and the pipeline begins generating cash flow, financing would be raised for the second phase that would see 11 compressors installed along the 1,814 km (1,127 mile) pipeline project.

The project has suffered lengthy delays due to difficulties obtaining financing and the security risks of building a pipeline through war-torn Afghanistan.

“Pakistan is working on mega projects such as CASA-1000 and TAPI to augment energy cooperation with Central Asia through Afghanistan,” the statement added.

The website Hydrocarbons-Technology.com states “Also known as the Peace Pipeline and Trans-Afghanistan Pipeline, the TAPI pipeline will begin in Turkmenistan and traverse Afghanistan to enter Pakistan and India.”