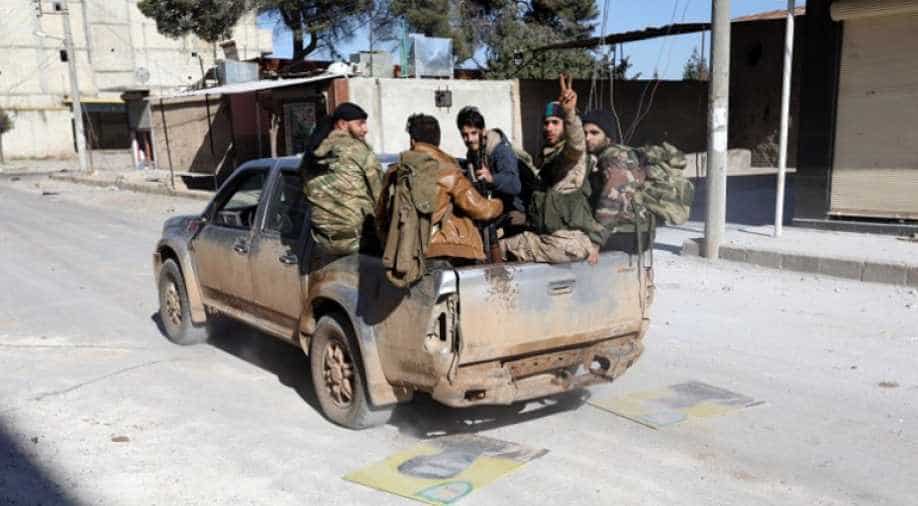 Turkish-backed Syrian rebels drive over portraits of Kurdish leaders in the town of Jandairis captured from Kurdish forces on March 9 in Syria's Afrin region. Photograph:( Reuters )

Turkish forces and allied Syrian rebels battling Kurdish militia in northern Syria advanced on Saturday to less than two kilometres from the flashpoint town of Afrin, a war monitor said

Turkish forces and allied Syrian rebels battling Kurdish militia in northern Syria advanced on Saturday to less than two kilometres from the flashpoint town of Afrin, a war monitor said.

Turkey launched operation "Olive Branch" on January 20 against the powerful Kurdish People's Protection Units (YPG), which controls the Afrin region in northwest Syria and which Ankara regards as a "terror group".

On Saturday, the Britain-based Syrian Observatory for Human Rights monitoring group said the attacking forces had scored a fresh advance.

"Turkish forces (and allied rebels) are on the edges of Afrin, less than two kilometres from the town's northeast," said Observatory head Rami Abdel Rahman.

They successfully captured the Brigade 135 military base from Kurdish forces, both Abdel Rahman and an AFP correspondent embedded with the rebel groups said.

Pro-Ankara fighters could be seen taking heavy machine guns and ammunition from the base, even as they continued to exchange fire with nearby Kurdish fighters.

Ankara says the YPG is the Syrian branch of the Kurdistan Workers' Party (PKK), which has fought a three-decade insurgency in southeast Turkey.

"Olive Branch" initially made slow progress, but the capture on Thursday of Jandairis, a major town in the Kurdish-held enclave, has given the operation a clear shot at the central town of Afrin.

The operation's media branch on Saturday said their new push had left Afrin's eastern side "exposed" to advancing fighters.

Erdogan has said his troops and the Syrian fighters they were backing could break into the town "at any moment," and on Saturday said they could go even further east.

"Once we have purged the terrorists (from Afrin) we will then cleanse them from Manbij, Ayn al-Arab (Kobane), Tel-Abyad, Ras al-Ayn and Qamishli," he said in televised comments.

Manbij, the next main YPG-held town east of Afrin, is a particular flashpoint as it has an American military presence there.

Fighting was raging on Saturday on other fronts around Afrin in an attempt to besiege it and cut it off from other areas, the Observatory.

Abdel Rahman said that the advance sparked "major concerns" for tens of thousands of civilians in the town of Afrin.

Thousands of people have fled heavy shelling on villages and towns near the Turkish border, many of them into Afrin town.

Only one route currently leads out of the town and into government-controlled zones in Syria's northern province of Aleppo.

Last month, pro-regime forces entered the Afrin region to take a stand against the Turkish offensive.

According to the Observatory, Turkey and allied Syrian opposition factions now hold 60 percent of the Afrin region.

The monitor says at least 370 YPG fighters and 340 rebel fighters have died since the assault began.

It says more than 200 civilians have also been killed, but Turkey denies the reports and says it takes the "utmost care" to avoid civilian casualties.

Ankara says 42 Turkish soldiers have died in the fight.