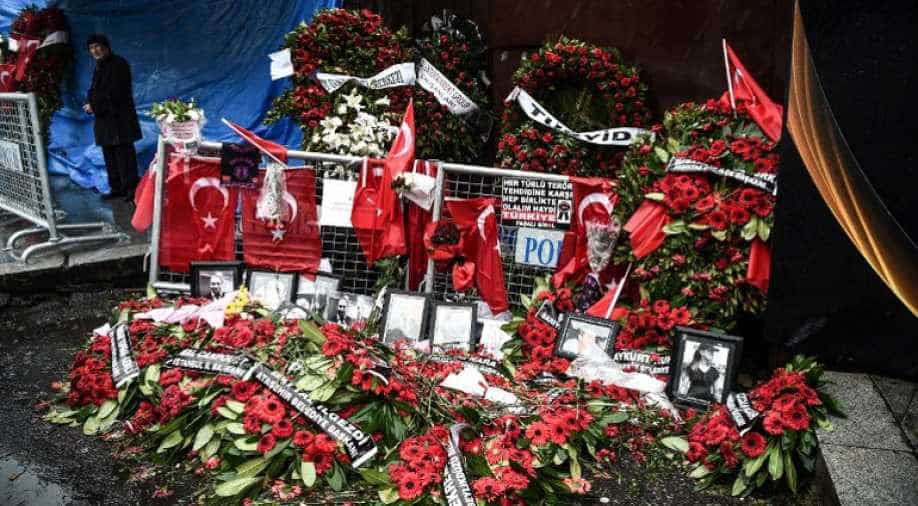 Thirty-nine people were killed, mainly foreigners, on New Year's night when a gunman went on the rampage inside a plush Istanbul nightclub. Photograph:( AFP )

Turkish police on Sunday detained almost 450 suspected Islamic State group members in nationwide raids just over a month after an attack on an Istanbul nightclub claimed by the jihadists.

Security forces rounded up 448 suspects, the state-run Anadolu news agency said, in Turkey's biggest police operation against IS since the New Year attack on the Reina nightclub that killed 39.

Among those detained were foreigners and those suspected of planning attacks in Turkey, the Dogan and Anadolu news agencies reported.

During the operation, 150 suspects, all Syrians, were rounded up in raids on hotels and private homes in Sanliurfa in the southeast, Dogan said.

Another 47 were detained in the nearby city of Gaziantep close to the Syrian border which has a known jihadist presence while 38 were picked up in Hatay, also bordering Syria.

Sixty suspects, mostly foreigners, were detained in four districts in the capital Ankara.

Dozens more arrests were made in provinces ranging from Bursa in the west to Antalya on the Mediterranean and Bingol in the east.

Television footage showed police in body armour battering down a door in a pre-dawn raid. In the usually peaceful Aegean city of Izmir, nine people suspected of travelling to and from Syria and planning attacks in the city were detained, Anadolu said.

One of the suspects detained in Izmir -- a Syrian identified only as E.A. -- is said to have been in touch with people smugglers in a bid to help the IS members escape to Europe, Anadolu said.

Eighteen people were detained in Istanbul and the neighbouring province of Kocaeli on suspicion of planning attacks. Another 14 foreigners were due to be deported, including 10 children.

Meanwhile in Eskisehir east of Istanbul, nine people were detained on suspicion of membership of Fateh al-Sham, Al-Qaeda`s former affiliate in Syria.

Thirty-nine people, mainly foreigners, were killed on New Year's night when a gunman went on the rampage inside a plush Istanbul night club.

IS claimed the massacre, its first clear claim for a major attack in Turkey although it had been blamed for several bombings in 2016.

Police detained the suspected attacker, Abdulgadir Masharipov, an Uzbek national, on January 16 after more than two weeks on the run and authorities say he has confessed to the massacre.

The Hurriyet daily later reported that IS had also planned a simultaneous New Year`s strike in Ankara but dropped the plot after arrests by the Turkish authorities.An Istanbul court on Friday placed a dozen people under arrest ahead of trial over the nightclub plot, including Masharipov's wife Zarina Nurullayeva.

In her statement to investigators, excerpts of which were published by the Turkish media, she said she had "no idea" what her husband was planning and "most of the accusations against me are false".

She was quoted as saying the couple had arrived in Turkey from Iran but her husband had sworn allegiance to IS in Pakistan.

Last year, Turkey was hit by a string of attacks blamed on IS and Kurdish militants that left hundreds dead.

It is also engaged in a battle with IS to take the Syrian town of Al-Bab, in the fiercest fighting yet of the Turkish military's campaign inside Syria that began in August.

At least 48 Turkish soldiers have been killed in the incursion so far, according to an AFP tally, the vast majority in the battle for Al-Bab since the fight for the town began in December.

Turkey was long accused by its Western allies of not doing enough to stop the flow of jihadists across its borders and emergence of IS cells in its own cities.

Ankara denies the charges, saying it listed IS as a terror group since 2013.

However, observers say Turkey has markedly stepped up its actions against IS in the last months and note that the capture of Masharipov alive may provide it with valuable intelligence.