Trump likened his relationship with North Korea's Kim to 'dating', 'wanted to be the one to break-up' North Korea's leader Kim Jong Un speaks as he stands with US President Donald Trump south of the Military Demarcation Line that divides North and South Korea, in the Joint Security Area (JSA) of Panmunjom in the Demilitarized zone (DMZ) on June 30, 2019 Photograph:( AFP )

His ex-security adviser John Bolton’s upcoming book which has made headlines for its controversial nature apparently mentions the bizarre details.

The book is titled “The Room Where It Happened”, and has been at the centre of controversy in terms of its content. According to Bolton, Trump had sought political favours from Chinese President Xi Jinping and had allegedly not raised any red flags with China’s treatment of Uighur Muslims, who are reportedly kept in concentration camps.

Bolton also revealed that Trump “always wanted to be the one who broke up with the girl first”.

The memoir was published on Tuesday, and is perhaps the first of its kind in the entire US history. Trump had attempted to block the release of the book, which was denied by US court. According to Trump, the book contains sensitive details pertaining to national security, which is why, according to him it ought to be banned. This request was rejected.

Trump intends to drag Bolton to court and will reportedly seek a share of profits made from the book.

Bolton claims that he had resigned last September after first-handedly witnessing denuclearisation efforts in the Korean peninsula. 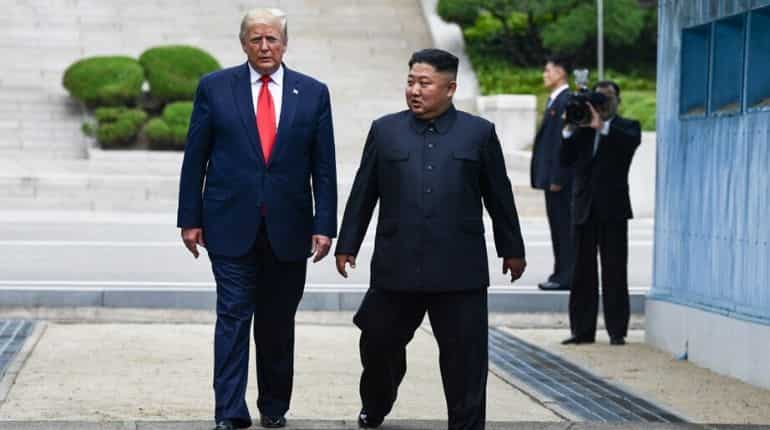 North Korea's leader Kim Jong Un and US President Donald Trump cross south of the Military Demarcation Line that divides North and South Korea, after Trump briefly stepped over to the northern side, in the Joint Security Area (JSA) of Panmunjom in the Demilitarized zone (DMZ) on June 30, 2019 | AFP

“Well, he said that he always, back in the day, as they say, he always wanted to be the one who broke up with the girl first,” Bolton said. “He didn’t want the girl to break up with him. And he used that to describe whether he would cancel the summit with Kim Jong-un first or whether we would risk the North Koreans cancelling it”.

“And I thought it was an insight into the president, candidly given, that showed how he approached this. As opposed to looking at it from the perspective of what our ultimate strategic interest was, in my view, would have been better not to agree to the summit to begin with.”

Trump has recently not made any comments on North Korea, especially after North’s violent transgressions whereby it blew up a shared liaison office across the border, which was seen as a symbol of North-South unity.

Bolton said “this entire two-year-long effort with North Korea ended in diplomatic failure. But that allowed the North Koreans the time that they need to continue to pursue nuclear weapons and ballistic missile delivery systems.”

Trump told a rally in West Virginia earlier while alluding to Kim, “He wrote me beautiful letters, and they’re great letters. We fell in love."