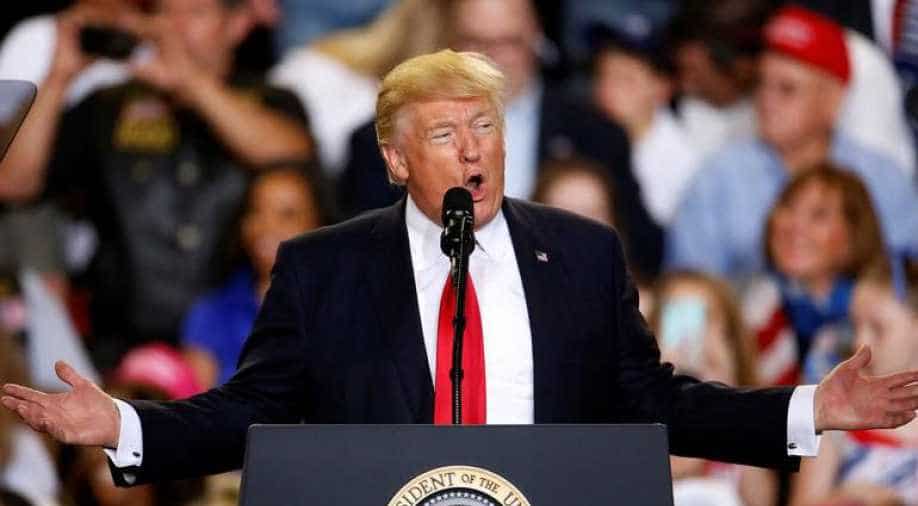 Trump will add the three stops to an already announced visit to NATO and G7 summits in Brussels and Sicily later this month. Photograph:( Reuters )

Trump's first foreign trip as president will include stops in Saudi Arabia, Israel and the Vatican -- the spiritual centers of Islam, Judaism and Catholicism||Aides described the decision to travel to Saudi Arabia first as an effort to reset relations with the Muslim world

Donald Trump on Thursday announced his first foreign trip as president will include stops in Saudi Arabia, Israel and the Vatican -- the spiritual centers of Islam, Judaism and Catholicism.

Trump will add the three stops to an already announced visit to NATO and G7 summits in Brussels and Sicily later this month.

"My first foreign trip as president of the United States will be to Saudi Arabia, then Israel, and then to a place that my cardinals love very much, Rome," Trump said in a Rose Garden announcement.

Aides described the decision to travel to Saudi Arabia first as an effort to reset relations with the Muslim world.

There, Trump will meet with leaders from across in the Gulf and  broader Middle East in the hope of curbing jihadi terror groups and Iran's growing regional clout.

"Saudi Arabia is the custodian of the two holiest sites in Islam," said Trump, who has frequently been accused of fueling Islamophobia.

Trump said in Saudi Arabia he would "begin to construct a new foundation of cooperation and support with our Muslim allies to combat extremism, terrorism and violence and to embrace a more just and hopeful future for young Muslims in their countries."

The aim, one senior administration official said, was to reverse a trend "of America's disengagement from the world and some of its biggest problems."

During president Barack Obama's tenure relations with the Gulf States, and Saudi Arabia in particular, were strained over his administration's engagement with Iran.

Trump's administration -- which includes generals who have had bitter personal experience with Iranian-backed militias in Iraq and Lebanon -- has vowed to push back against Iranian influence across the region.

The visit also comes as Trump wades into Middle East peacemaking, trying to reach a deal between Israel and the Palestinians, a goal that has eluded his predecessors and countless diplomats.

Trump is expected to meet both Israeli Prime Minister Benjamin Netanyahu and Palestinian president Mahmud Abbas on the trip.

A senior aide did not rule out the possibility of a presidential stop in the West Bank, but that is likely to be contingent on security and Abbas taking concrete steps toward peace.

Trump on Wednesday hosted Abbas at the White House, pledging to help end the decades-old conflict between Israelis and Palestinians.

"It is something that I think is frankly, maybe not as difficult as people have thought over the years," Trump said, exuding his trademark bravado.

From there Trump will travel to the Vatican, where he will be received by Pope Francis on May 24.

Trump's attendance of a NATO summit in Brussels will be closely watched. The new president has demanded allies pay more for collective security, but has backed away from his early declarations that the alliance is "obsolete."

A G7 summit in Sicily will offer Trump the chance to sit down face-to-face with leaders of the world's largest economies.